THiCK – a Premium Theme for WordPress

Over the years, I’ve mentioned on several occasions that I wanted very much to release some themes of my own. Whether it be premium or free releases, it’s always something I wanted to do. But it’s just never happened, and the main issue has always been time. I’ve have grand ideas for themes, but knew I would need to invest weeks to crank them out. Back in early September, I was approached by Adii to collaborate on a premium theme for WooThemes. This arrangement was exactly what I needed to get a theme out there with my name on it, without breaking the bank in the process. 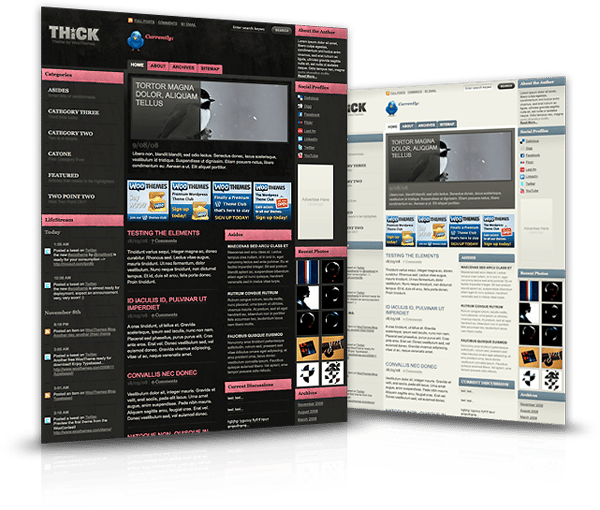 Let me introduce you to THiCK. The WooThemes guys gave me free reign on all fronts, with only a small list of specifications to meet – all of which I would have included anyhow. So really, THiCK is pretty damn close to what I would have produced had this been my own project.

THiCK is a beast of a theme! It’s catered towards personal blog authors and packs a pile of features right out of the box, thanks to a number of a custom widgets created by the team at WooThemes. From a design standpoint, it’s extremely flexible. There are 2 main styles (clean and grunge) and a main colour scheme for each (light and dark). From there, you can choose from 5 variant colour schemes that change headings and links through-out the blog. There’s also 2 different header layouts that can be selected from the admin. THiCK is built on the 960 Grid System and the original PSDs are included in the bundle, so customizing further should be a breeze.

I’d like to thank the guys at WooThemes for the opportunity to finally get around to something I’ve pushed to the back-burner far too many times. It was an absolute pleasure working with them over the course of our 3 week stint, and something I would recommend to any fellow designers who might be curious to how a collaboration like this would work.

And finally, my involvement in this project was on the design and XHTML/CSS. WordPress development was handled entirely by WooThemes. I haven’t actually got my hands on the finished product, and am quite curious to see how they handled things like the lifestream and media streams. I should also point out that I’ve noticed a couple minor CSS bugs since I handed the templates off. I’ve already started a conversation with Adii on this topic and will see about getting them sorted out ASAP.

I’m very interested to hear what people have to say about the theme in general, and how it’s been released (via WooThemes). Do you think this is something I should consider doing on a regular basis?

Loved them since you posted them a while back on Twitter!

I’m really liking the theme, though I have to say I prefer the grunge design way more than the clean design. If I bought it I’d definitely settle for the dirty dark green style. Good job – hope you had fun doing it!

Yes, Brett. You should do this on a regular basis 😉

I definitely like the grunge more. I think its a very nice design, however too busy for my tastes (just too many things going on), but that makes it very flexible on many different levels for many people.

As always, reflects your style and is really rad lookin’ Cheers!

P.S. My avatar looks amazing on this brown background.

Was definitely a honour working with you as well Matt and we’d be happy to release some more beauties from you in the future! 🙂

I totally love the theme. I’d probably buy it if I weren’t a total cheapskate right now. The best part for me? The games/music/movies/books section on the bottom left. So perfect.

Wow! That is a spectonkular theme!

Okay, spectonkular might not be a word, but it’s still awesome.

THiCK is definitely the perfect name for it. Easily one of the best themes on Woo, too. Kudos.

I do really like the theme, but I also think it’s against the principle of WordPress to sell themes for WordPress instead of releasing them freely.

Personally I don’t see anything wrong with selling themes for wordpress. There are a lot of people who do not have the time or the capabilities of putting a kick ass theme together on their own, so buying one from a designer/developer who has spent a lot of time designing and developing the theme is simply like buying a website from them. (in a sense).

That’s not to say I find premium themes completely ethical as I’m a grade A hypocrit at the moment due to me using a premium theme due to me simply not having any time to myself and needing a quick fix.

In the end selling premium themes is a thin line to tread on and you can sway either way. *However* it is the designers/developers time you are paying for overall.

I like it, I totally think the book, film, games part is awesome – how’d you do it Matt, bit of JQuery? But how do you manage the images? Let me guess, buy the theme and find out? 🙂

p.s. Questions are in your inbox.

I think Devlin is referring to the ambiguous legal standing of premium themes that run on a GPL licensed piece of software (a topic which has been discussed ad naseum elsewhere). The belief that a designer should be able to sell his/her themes is one of the reasons that other blogging systems are being developed, such as Habari.

That said, it does look like a great theme! You’re still the king of grunge, Matt.

Understood. Like I said, Premium Themes will be disputed until there is no longer a sun in the sky.

What I do know is that Matt is an awesome designer.

I know it isn’t my place to answer for Matt but he’s probably thinking up of another kick ass theme. Anyway it is done on Jquery, I had a ‘peek’ into the source and stylesheets.

Congrats to you Matt for raising the bar on the Woothemes site. It looks amazing to me and it’s got the Matt grunge style.

By the way if you don’t want others to read the source, I found out the source by using the links on the demo site.

The theme looks great! Congratulations on shipping it Matt 🙂

w00t, its like xmas has come early! Months and months between a re-design but only a few after your last you show off another great grunge theme! How much do u make if it sells? (sorry if this is a personal Q.)

Oh! I love this; it looks wonderful

[…] was designed by popular web designer Matt Brett for WooThemes. It’s a personal blog theme with an integrated lifestream and loads of […]

I absolutely love this theme, and if I had the money/the means to purchase the theme, I absolutely would. I’m excited to see more themes by you, Matt.

It’d be great if in the future you’d think about releasing a free theme. Nothing close to this, but something simple that newbie designers (such as myself, lol) could work off of.

That has honestly got to be one of the best themes I’ve seen in a long time, it really stands out from the pack.

Slick! This is a source of ideas at the same time! thanks!

What an awesome theme and design. I really like it. Kudos!

Lovin’ this theme mate! Check out what i’ve done with it http://www.austalentdaily.com Hope I haven’t spoilt it haha.

Very nice theme, liked it so much I implemented it into my current site.

I even made a whole lot of changes to suit my need, good job!

Was wondering if it was possible to implement pagination after the featured post. I have tried every little thing. but it may not be possible on this theme.

I didn’t do the WP development for THiCK, so I’m not the best person to be asking about this. But I assume they’ve used query_posts to display the posts on the homepage. If that’s the case, I would use a modified query_posts which includes a function for pagination…

From there, you just do the rest of the loop as usual, then drop your pagination code after the endwhile.

Thick is a great theme, so how does Woo Themes work Matt, do you get a royality fee for each time the theme is purchased, a one time payment or did you make it for them for free?

I think the THiCK theme is fantastic. It’s very robust and can be ripped apart easily to get rid of anything that isn’t needed. The design is outstanding.