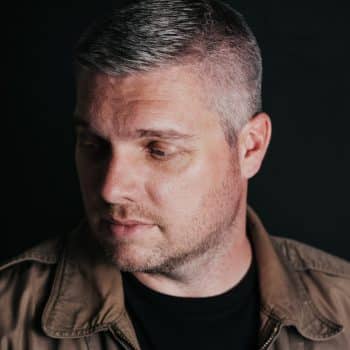 In short, I’m a web designer/developer from British Columbia, Canada (just outside of Victoria), but I grew up in the suburbs of Toronto. I’ve mostly been doing freelance work since mid-2005, working out of a cozy office in my home. I’m a father to two beautiful, strong-willed girls. I enjoy listening to my favourite albums on vinyl while sipping whiskey; typically bourbon or scotch, and spend my downtime playing video games, taking photos, or jamming on cover songs.

I started blogging in July 2004, but I’ve been building sites WordPress since the beta version was released in 2003. In the fall of 2005, I launched a redesign as part of the now-defunct CSS Reboot, which ended up getting featured in several of the (then prestigious) design galleries. Shortly after, I was accepted into the 9rules Network; a collection of hand-picked blogs from around the world, which helped to gain further recognition.

On December 14th, 2005, Microsoft announced that they had adopted Firefox’s RSS feed icon. Back then, web standards still needed a good push, and I saw this as an opportunity to standardize how we linked to RSS feeds on websites. I skipped work one morning to re-create the icon in vector, told everyone that we should all jump on board now that the two biggest browser developers were sporting this unified icon, and the world seemed to agree that it was a good idea.

All this attention brought loads of traffic my way. Plenty of which translated into freelance work, and relationships with people whom I’ve never even sat down and had a coffee with, from all corners of the globe. 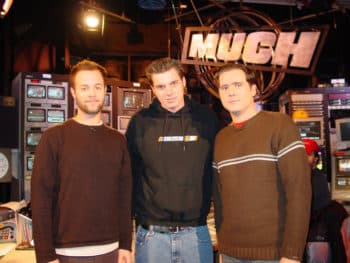 With Tom and Jim from Jimmy Eat World at MuchMusic.

After completing my first year of multimedia design at Durham College, I felt that “higher education” wasn’t going to get me where I felt I needed to be, so I began my first real job search. I ended up landing a job at ‘The Nation’s Music Station‘, MuchMusic. For 2 years I co-hosted a weekly internet pop culture show under the moniker MuchMatt 2.0. I was later bumped up in the ranks to a senior position and continued to work in the Queen St. window until July of 2005.

Mid-July 2005, I moved on from MuchMusic and joined the Participatory Culture Foundation, where I spent approximately 8 months managing their many sites and working on the open-source internet television platform, Miro (formerly Democracy TV).

Since March 2006, I’ve worked as a freelance web designer/developer from the comfort of my home office. There was a year there when I stopped taking client work and joined a start-up design firm, assuming the role of Lead Web Developer. It didn’t take long for me to realize just how good I had it while freelancing; working with people I felt some form of connection with, on projects I was genuinely interested in. I decided to move back to the world of freelance web design.

August 2018, after a couple of years of ups and downs, I decided it was time for some stability. An old client reached out and connected me with his business partner, the CEO of Awesome Motive, who are responsible for some of the most popular modern WordPress plugins. I was offered a designer position, working specifically on WPForms and MonsterInsights, and I took it! At this time, I’m no longer taking on new clients.

I’ve been pretty big into video games since I received a Nintendo Entertainment System for Christmas in 1986. I got out of gaming for most of the 90s, while I was busy riding skateboards and playing in bands. I picked the habit back up in the early 2000s, but the focus was on PC gaming. A couple of months after its release, I picked up an Xbox 360 and never looked back. Current gaming time is spent on PS5 and Nintendo Switch. 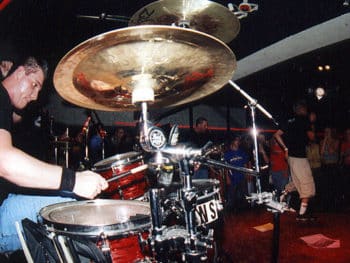 Over the years, I’ve played in a number of bands. Most notably, a ska-punk band called Lucky Number Seven from 1997-2002. I was, and still am super tight with the other guys in the band. LNS is responsible for some of my fond memories and I met so many great people playing shows around the country.

Though I don’t spend much time behind my drum kit these days, music still plays a massive role in my life. Spotify is always running while I’m at my desk, which is 8-10 hours per day.

These days, I enjoy playing cover songs on my acoustic guitar.