Web designers constantly have the urge to gut their own site, and start from scratch. Thankfully, my priorities keep me in check, and it’s usually every two or three years that I do a major overhaul. While I have other things I would have rather taken care of before a redesign (like getting some more WordPress themes on the market), I couldn’t help but feel that my site had become stagnant, and with all of my recent client projects supporting mobile platforms as well as desktop, the urge was eating away at me. After weeks of working 10-12 hour days and losing many weekends, I’m stoked to roll out this redesign, and am hoping it will reignite my blogging spark. 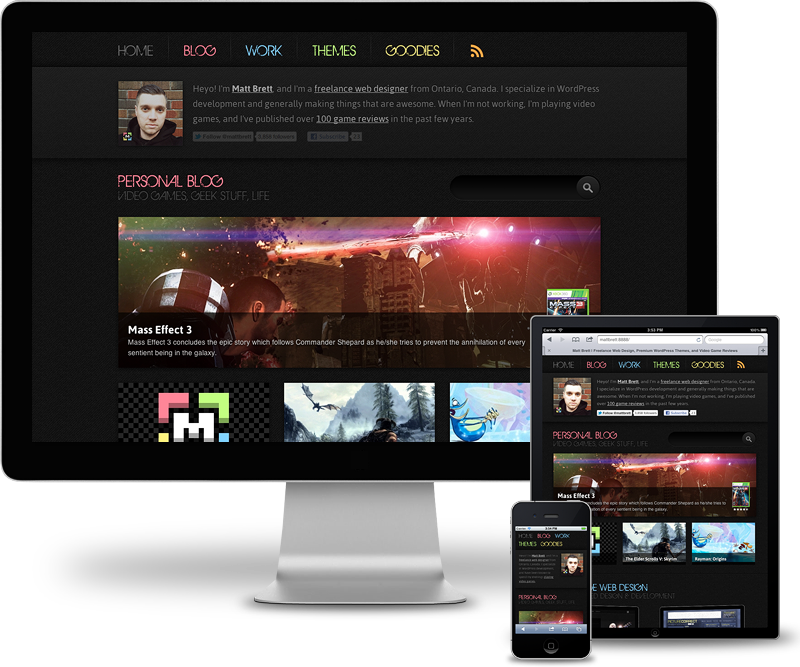 I’ve never really had a logo, or even consistent type that has represented or accompanied my online identity. There have been a few times when I wish I had something other than my face to use, so I decided to whip up a simple logo of sorts that fill this void.

Strip it Down, Throw it Out

Over the years and through the redesigns, my site had grown to a point that any major changes (and even updating certain content) required a fair amount of work. One of my main goals was to toss any content that wasn’t 100% necessary.

I previously had a section called Marketplace, where detailed theme pages lived. This was initially going to be a place where I would sell my own themes first hand, and even partner with some third parties to sell all sorts of digital goodies. It never quite panned out, and instead became a burden. Marketplace is out, Themes is in. And on the new Themes page, I simply link off to ThemeForest.

Similarly, the Work section has been condensed to a single page, not only to ease the content management end of things, but to provide a quicker look at my portfolio for the end user.

This is the first design I’ve sported since 2005 that doesn’t look like someone beat the piss out of it. I still love a good grunge design, but wanted to take things in a bit of a different direction. “Simple” was a word I kept repeating back to myself as I worked on this iteration, and my goal was to apply it to all aspects of the site. My homepage has typically been an overview of my entire site, and a brief look at what I’m doing across the social networks. Most of this content still exists, but it’s been moved to the About page.

As I mentioned earlier, one of the reasons I really wanted to redesign my site, was to optimize it for mobile platforms. While I’ve only tested it on iOS devices, it should look decent on any modern tablet or phone. I didn’t cater to any specific devices or resolutions. Break points were addressed as problems occurred, which should result in a better all around experience.

At the time of writing, I’ve done extensive testing in iOS Simulator and in the browser at different sizes. I haven’t even thought about testing on Windows just yet, and things are likely out of sorts in Internet Explorer. I’ll get around to them at some point, but am in no hurry.

What Do You Think?

I’d love to hear how you’re feeling about this latest version of my site. Especially those who have been around for a while and are familiar with previous iterations. Drop me a line below in the comments, or ping me on Twitter.

Love the new design Matt, followed you for a long time and you keep surprising me.

– Keep up the good work!

HA! Love it, bro! You brought back the grunge from, what was it, two or three iterations ago? That was right around the time I found you through 9 Rules. ’07-’08 ish. Cool stuff. Too much to comment on. Overall, it looks great!

Overall, it feels a lot like the original design that got me noticed, back in 2005. I went to a pink and went design after that, then back to black with pink, blue, and green highlights.

Killer. But I want to see more of that new logo of yours. Do you have future plans for it in the design here or is it for other purposes? Stickers? T-shirts?

Thanks Geof! And glad you’re digging the logo. I only created it, as I needed something for a favicon. So it was very much an after-thought, as far as the rest of the site is concerned. I think I may use it for the home button in the nav, though. Would look cool to the left of the footer links, as well.

I likely don’t have an ounce of skill or talent the other commenters have, but I’m really diggin’ this new design. And I think Geog’s on to something… the logo could easily be found attached to devices around the world if it were a sticker…

Been following your blog for a number of years now, really like the re-design; your work has always inspired me to become a better designer and this re-design is no exception 🙂

Love the redesign Matt. You pulled off a clean style and kept around just enough of the old designs to instantly be recognizable. I saw the 4 colors / grungy font and was right at home.

Just found your site from one of the sites you built, very cool site design. I’ll be checking back in! I’m from Ontario too, near Toronto. I have my first wordpress site up after a redesign and I got two more in the works. I’ve learned a huge load since first installing wordpress on my computer a couple months ago, but one day I would love to be able to build a site like this from scratch. Do you hire help? I would work for free just to learn what you know.

This is just Beautiful! Awesome work!

Matt, you’re fricking AMAZING. btw, I was a fan waaaaayyyyyyyyy back when you did the Spectre theme on theme forest (yeah I know, right lol, long time). Anyways, I’m glad to see you’re doing well! Unfortunately, I’m using a different theme now, but you definitely helped me be seen as a more professional site when I started. I thank you for that.

It’s funny cuz my names Matt too, & I’m actually supposed to be moving to Toronto, Ontario in about a month. Trying to do journalism & web design. But OMFG, I have SOOOO much to learn!!! I got in an accident a couple years ago and it really got me behind in everything. Bleaaahhhh. But anywyas, wow man, I never knew you actually did video game reviews…I thought the post images & such were just for show (since you’re a web designer). Guess not. The description really helped clarify that. I’ll definitely be following you.

P.S. If you haven’t already, review Blazblue Continuum Shift Extend, & Skull Girls. For future games, keep your eyes on Guild Wars 2, Persona: Arena, & borderlands 2. Oh & checkout my website & see watchu think of it…if Its “Matt Brett worthy” lollll – I’ll Matt, you’re fricking AMAZING. btw, I was a fan waaaaayyyyyyyyy back when you did the Spectre theme on theme forest (yeah I know, right lol, long time). Anyways, I’m glad to see you’re doing well! Unfortunately, I’m using a different theme now, but you definitely helped me be seen as a more professional site when I started. I thank you for that.

Loving the new site design. It’s been a while since I visited and it made for a nice surprise.