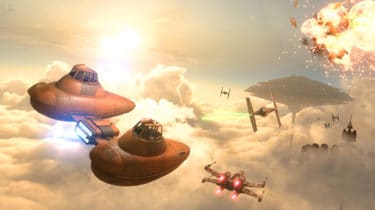 It's a game I find myself playing in short bursts, and not for more than a few days in a row. But every time I sit down to play Battlefront, I have a blast.

I Wanted to Love Soulcalibur IV

I don’t play many fighting games, although I have in the past. I spent many, many quarters on Street Fighter 2 and Mortal Kombat back in the day, but when things started getting crazy complex, I lost interest. Trying to remember 25 hit combos and countless special and finishing moves for dozens of characters isn’t […]

My Family is Hooked on Lego Star Wars II

I seriously did not see this coming. I rented Lego Star Wars II thinking it would be good for a few hours of entertainment and some easy achievement points, nearly 10 days and 30+ combined hours later, my whole family has been in on the action and we're all loving it! This is the first time a single title has had myself (26), my wife (27) and our 8 year-old daughter vying for the console. And the fact that this is the first 360 game my daughter has been really into has me pretty excited. It's good to see some kid-friendly titles hitting the 360 lately.

I had planned to review F.E.A.R. and Call of Duty 2 before Battlefront 2, but I've had so much fun playing it, I just couldn't hold out. Battlefront 2 is the ultimate Star Wars game. If you enjoyed the first one, chances are you'll love the sequel. For those that aren't familiar with the series - Star Was Battlefront is exactly what it's name implies. You are one amongst massive battles that you've seen in the Star Wars movies. You can play as any of the four factions (Rebels, Empire, Republic and CIS), re-enacting the epic battles on various planets and for the first time, in space. All the vehicles and weapons are also present, including some that only made brief appearances in the movies.