Xbox 360 Through an LCD: Cable Comparison

Over the past couple months, I’ve had a number of people ask how my 21″ widescreen LCD performs with the Xbox 360. To be honest, I haven’t really been using my monitor for gaming much since one my primary reasons for getting a 360 was to get myself away from this chair once in a while. I’m currently using my 27″ Sony Trinitron television with the S-Video cable. It’s the best resolution I can get on my standard definition television and it’ll hold me over until I can drop the cash for an HDTV. Since I’ve already got 2 cables in my position, I went out and picked up the VGA cable for the 360 to do a little comparison. The results blew me away!

On a standard definition television, S-Video and even Composite looks pretty good. When you use these cables on an LCD it’s just plain ugly. Composite especially, is blurry and blocky around the edges. Just gross! I tried playing Burnout Revenge with the composite cable for a quick race and I had a headache before I was done my second lap. The Xbox 360 Guide looks exceptionally awful and is quite hard to read, where as the same cable on a SDTV looks just fine – nice and crisp. S-Video is a noticeable step up in quality. Especially on text. Things are much easier to read and you don’t feel the strain in your eyes from trying to focus on the blurred edges. Even still, I wouldn’t recommend it. You’re still better off using a SDTV, believe it or not. 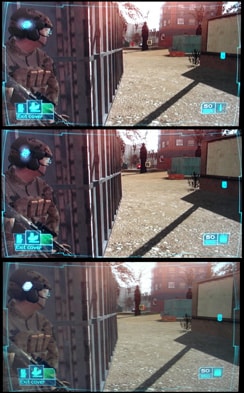 One thing to keep in mind when using a widescreen 16:10 LCD is that the Xbox 360 was not designed to be displayed on a screen with this aspect ratio. Widescreen televisions are 16:9 and SDTVs are 4:3 – I guess Microsoft didn’t count on people using widescreen LCD monitors with their 360s. A shame, really since it’s a pretty cheap alternative to an HDTV – not to mention, multipurpose. When using the Composite and S-Video inputs, the image is presented at 4:3 aspect ratio and centered on the screen. There are black bars to the left and right to fill the space. This is better than stretching the image, although it still looks like crap. As soon as you plug in the VGA cable you have a bunch of new options in the form of screen resolutions. Just like your desktop computer, you can change the screen resolution of your Xbox 360. For those that are using a 4:3 LCD monitor, you’re in luck here. You can set your 360 to 1280×1024 and it’ll look great! Those of us at 16:10 aren’t so lucky. As I mentioned previously, most widescreen televisions are 16:9 and there’s no 16:10 resolutions present in the 360. The closest being 1280×768 – the 16:10 variant is 1280×800, so you’ll get 32 pixels worth of stretching. Fortunately, this isn’t a lot considering the resolution. But it is slightly noticeable on things that are meant to be round or square. You should notice in the screenshot above, the VGA example looks taller than the rest. I scaled the VGA version of the full screenshot down to match the rest in the image to the right.

So, if the verdict isn’t clear – it would definitely be worth your $25 to pick up the VGA cable for your Xbox 360 if you don’t yet have a HDTV and want to experience the 360 in all it’s next-gen glory. The difference between the 3 cables is huge, especially when comparing the jump from S-Video to VGA. And for those with a 16:10 monitor, I wouldn’t worry too much about the stretching. It’s hardly noticeable, and for the huge increase in visuals, I’d say it’s a sacrifice you should be willing to make.

You know, you’re always one step ahead of me. 😛 The VGA cable that you’re reffering to, is it the HD AV cable from Microsoft? I’m about to be in a similar situation with my monitor (The Dell 2005FPW.). : Since 1280 x 768 is only 32 pixels off, were you able to run 16 pixel wide black bars on either side? If so, was it bearable? Nice article.

I am running a Pelican VGA cable (half the price of the MS one and all I lost was the Optical lead – no 5.1 setup so I dont care) and am running it through a 19" CRT monitor.

Now you would think 4:3, fantastic it’ll work fine. But it doesn’t.

What happens is that the guide looks just fine, some games look just fine… until you load PGR3 and enter a race…. oh dear god look at the widescreen wedged into 4:3.

So what I did was pick 1366×768 and simply letterboxed it myself on my monitor, I’m fortunate in that I have a KVM and when I flick back to my Mac Mini which runs at 1600×1200 the monitor recognises the resolution shift and goes back to my colour and size settings for the Mac. Nice.

So David – unless letterboxing really really REALLY bugs you then the 32pixels of black bars will do fine compared to big chunks of my screen being black bars, which actually doesn’t bother me.

Matt, for the 16×10 issue can’t you just readjust your monitor to display black bars on the top and bottom? I think that would look better than having the aspect ratio off.

@David/cavemonkey50: In regards to adjusting the screen height to force black bars on the top and bottom – unfortunately, my monitor doesn’t support this. I can only change the screen width and height when using the DVI input. The ‘video adjust’ menu is inactive when using any other input. Good suggestion though – first thing I tried.

@Matt: Yeah at any 4:3 resolution you have the choice of either using fullscreen or letterboxing the video via the dashboard, however games are allowed to override that setting.

PGR3 is one of those games. A bit of a bugger but to be honest have the letterboxing is rather nice.

This is great news. I think a run to my local Fry’s is in order later today. Thanks!

This reminds me of my hardware geek colleague who’s really tricked out his Xbox system.

Having seen it in action, I think it’s worth it.

@Ed Kohler: That dude is right on the money. I spent pretty close to $1000 CDN when it was all said and done. Mind you, I picked up a couple games as well. But still. You end up spending WAY more than you’d expect considering the price tag.

It’s like the difference between 800×600 and 1024×768. You think that you’re fine with one till you try the other and then nothing quite looks as good with the original.

How about all those other vga cables out there.. Madcatz and monster both advertise 1080p resolutions.. Do you think they have 1680×1050 support?? I can’t find reviews/resolutions ANYWHERE on the internet. LMK if anyone knows something about these third party cables.

What I am assuming the Madcatz and Monster cables are claiming is that they can be plugged into a TV which supports 1080p.

So lthe xbox will upscale the resolution without messing too much with clarity?

Although 720p is better for fast motion stuff like games and sports compared to 1080i.

On my Dell LCD (and most others I’ve played with) there’s an option buried in the Video stuff for Scaling. It usually defaults to either 1:1 (small picture in the middle) or Fill (stretched, out of aspect ratio). Setting that to "Aspect" will stretch the longer dimension to the full height or width of the monitor, and will scale the shorter dimension to preserve aspect. That’ll give you a 16×9 image in the middle of the display.

Yeah I have the 2005 fpw and I have been toying around with all different modes.. Well I came to the conclusion that 1280×1024 when set to wide screen format will look identical to the other 16:9 and 16:10 formats. You need to have the 1280×1024 set to fill in the monitor settings, but when you use the other 16:10 or 16:9 settings use the aspect. They all give no streching and very small, ractically unnoticable bars at the bottom. Overall the picture looks amazing.

so which resolution woul you recomendo for my lcd?? thanks.

nice article ! how about a vga to component box, have you ever tried it ?

@pedro: I currently don’t have the comment cable, but back in December I rented a 360 and tried it out then. I wasn’t happy with the quality of the picture when using it through my LCD. I’d recommend VGA over component.

I recently got a 360 and I’m using one of my widescreen monitors via VGA with the 360. I was a tad disappointed that MS didn’t come out with the widescreen resolutions of PC monitors from the get go. Of course, it’s possible for them to add it in the future however, I’m thinking that the game dev’s don’t test at any resolutions apart from the resolutions that are in the options (not that that should matter anyway, it should scale without any problems.. performance defects may possibly occur). Hopefully it’ll be updated in a future dashboard update, fingers crossed!

I also noticed this post was posted on my birthday 🙂

I own both component and VGA cable. I tried both on my Samsung LE32R72B and VGA is miles better than component. I think you could not say this in general for all HDTV because it only a really better picture when the TV supports the VGA resolution nativly so that one data-pixel send by the Xbox over the cable to the HDTV will also be displayed as one pixel without any scaling and filtering. Then scaling and filtering is in the play with VGA than VGA is not much better as component.

Do you guys think that a VGA cable would look nice with that screen?

To those of u using LCD monitors… Do you get any ghosting like the kind u get using a LCD tv with component?

what a great review. very helpful because im planning on buying a lcd monitor for my xbox and this cleared alot of things up

As our friend Elijah here I’m about to get a LCD monitor (Samsung 2253BW) to hook up to my XboX 360. The actual setup, with a Toshiba 27” tube TV isn’t cutting, as I can’t really read some of the text that comes up in my games.

I have a couple of questions, though:

The monitor that I’m looking at (mentioned above) was chosen while comparing specs to other models, including from other manufacturers. It has a 1680×1050 maximum resolution, which makes for a 16:10.

In going for the 22 inches, do you and our fellow friends here agree that this is indeed a pretty good monitor, for the price of CAD$270, or do I have better options, within the same price range?

Thanks in advance for all the replies to my questions.