Every year Microsoft holds a little get-together in Toronto around this time to showcase the games and other new things that are headed to their platform in the coming months. X’09 took place a couple days ago, and I was lucky enough to get an invite. Expectations were high, as I’ve been to a few X’0 events in the past and they seemed to get bigger every year. I suppose 2009 is the exception, as it definitely wasn’t as packed with looming holiday blockbusters as previous years. But it was great to get out and get my hands and see some of this year’s most anticipated games months before their release. 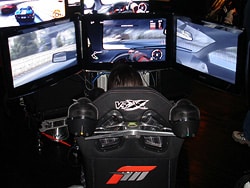 As soon as I walked in the room, I was greeted by a pair of triple screen Forza 3 setups. Equipped with racing seats and the official Xbox 360 racing wheels, they were essentially the dream setup for any sim racing fan. Needless to say, I didn’t stray very far until I got my turn. There was also two more setups which contained one large screen. I actually preferred this over the triple screen, as I found the three screens to be a little too much to take in. At least, at such close proximity.

I’ve only spent a little time with the racing wheel shortly after it was released, at which time I played Project Gotham Racing 3. After a couple hours, I didn’t feel like I had made much progress and was still struggling to keep my car from smashing into walls at every turn. I expected the same with Forza 3, and was down right shocked when I finished my first race in second place. I hit the retry button and placed first with ease. All of this, with minimal assists enabled and playing on medium difficulty. Honestly, I wasn’t overly enthused about Forza 3’s release, but I sure am now! And I may just have to pick up a racing wheel. 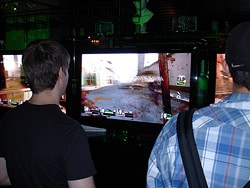 I didn’t actually get my hands on Left 4 Dead 2 until close to the end of the event, as it was definitely a favourite among the crowd. And for good reason! If you played the first game, I don’t need to tell you how much fun it is. You already know… but it’s safe to bump up your expectations even a little further, as Left 4 Dead 2 has been refined in just the right spots to make it one hell of a zombie bashing good time! The melee weapons are hilarious, the new super zombies are insane, and it’s just as overwhelming, if not more than the first game.

One little detail that came in quite handy, is the quick-turn button, which is mapped to RB by default. It allows you to do a 180* spin instantly.

Oh man, I can’t wait for this game, and am even more bummed about it being delayed until 2010 now that I’ve seen it first hand. The hand-to-hand combat is fierce, brutal, and extremely satisfying. And Sam’s interrogation techniques have… matured over time.

Ubisoft have adopted a really neat way of showing your current object, by way of projecting them on near by surfaces. For example, the words “Rescue the Scientist” are beamed onto a wall by a light source, which apparently only you can see. But the cool thing, is that it can be interacted with. If Sam were to walk in front of the words, they are projected onto him as well. Very cool!

Honestly, I’m not interested in this game in the least. The Skate franchise has me covered for all of my virtual skateboarding needs. And physical activity while playing video games just isn’t my thing. Hence the thick layer of dust on my Wii.

But I did spend some time watching people demo this game, along with the Activision rep. It seemed like most people were putting too much effort into it, and over exaggerating. The rep made it look effortless, and a simple bend or lean would pronounce huge tricks. The visual style of the game looks more in tune with Skate has been doing, but there’s still lots of flare and a goofy HUD that you’d expect from a Tony Hawk game.

There were a few other games to check out, like DJ Hero, GTA: Ballad of Gay Tony, some hockey game, a couple XBLA titles, and a couple that are already released (The Beatles: Rock Band, and Halo 3 ODST). But the majority of this season’s heavy hitters were MIA entirely. Modern Warfare 2 was there, but behind closed doors and you had to wait quite a while to get in. I couldn’t be bothered.

I’m happy to report that the Facebook and Twitter add-ons are really looking sharp! I assumed they would be really stripped down and almost useless, but I was pleasantly surprised several times as I was shown live demos of each.

A little big of unannounced news for my Canadian friends – TV shows are coming to the XBL Marketplace this fall. You will be able to rent and buy episodes from a number of shows, past and present.

The 1080p steaming service looks really nice as well. The one thing I was interested in was the price point. I was worried that a new price would be introduced for 1080p, on top of the standard and HD (720p) versions, but that’s not the case. The HD option will be replaced by the new 1080p streaming service, and you can choose to stream or download. 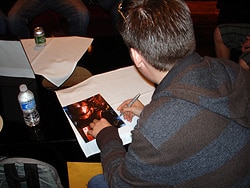 It’s always fun going to these events and seeing what’s in store for gaming in the coming months. It was also great meeting some folks I’ve crossed paths with on XBL and Twitter. Jeff Jenkins (Sinnix) was there, who you might recall is the artist behind the fantastic illustrations that appear with my game reviews. I had a chance to meet up with Jeff prior to X’09 for an alcoholic beverage and to shoot the shit about gaming and such. Every year Jeff gives out signed prints of some of his art. This year’s poster featured ODST’s hero, The Rookie.

Next week, I’ll be attending Sony’s holiday preview event, and there’s plenty to be excited about there!

Yeah I agree about the 3 screen thing. We only have two eyes and our focus arc is about 3 degrees. But over the top is what those events are all about. I remember going to events when I was teenager that had all these virtual reality setups. Haven’t seen them since.

Sounds awesome! Wish there were more events like this in London, we’ve got the Eurogamer coming up in late October which is bound to bring in some big titles for me to get my hands on.

Did you say Conviction was playable? I’ve been dying to try it out, that and Uncharted 2 took the crown at E3 and I’ve heard it’s only been played behind closed doors. Sounds like you had a great time and I’ll be sure to keep my eyes peeled for your Sony Holiday Preview Event article!

No, Conviction wasn’t playable. They had 2 guys from the dev team demo’ing a level. It was out in the open, though. I watched them play through it a few times.

Great post, very interesting to see how some games are coming together, particularly Conviction and Left 4 Dead 2.

Conviction has worried me slightly for the simple fact it’s such a change from the Splinter Cell norm. What I mean, is that it doesn’t appear to be about stealth as much, which is always what Sam Fisher has been about, right? What do you think now you’ve had hands on with it?

Left For Dead 2; how arcadey is it looking? Even though the original is fun, there are definitely parts of it that spook me out. I hope Left For Dead 2 carries on that formula.

Oh, no worries Ash. Conviction is all about stealth, just as the previous games were. In fact, Sam was even rocking his patented goggles during the demo I saw.

Even though the level I played in L4D2 was in board daylight, it still had that atmosphere that the first game was dripping of. It looks and feels like the same game, with new weapons, more baddies, and new maps.

Great post, Conviction and Left 4 Dead 2 will be killer!

Is Left 4 Dead 2 the exact same formula? Get survivors from point A to point B? I’m kind of hoping in more variety in the missions, I watched Dawn of the Dead recently and driving a big ass truck through thousands of zombies looks like fun, especially if you have chainsaws lined up by the windows. I guess I’ll have to wait for all that zombie madness with Dead Rising 2 instead.