I remember hearing a mention of a live action Transformers movie some time last year – but nothing ever came of it… until now! At Comic-Con this weekend, Dreamworks officially announced the movie by parking a life-sized Optimus Prime in the convention centre. Not too much is known about the movie just yet, except that it will be directed by Michael Bay and the executive producer is Steven Spielberg.

There’s an official movie site already online and of course, a blog to accompany it. There’s a video of a dude walking around the truck and some additional photos, but nothing that’s all that exciting – except the hubcaps. Where can I get me some of them? 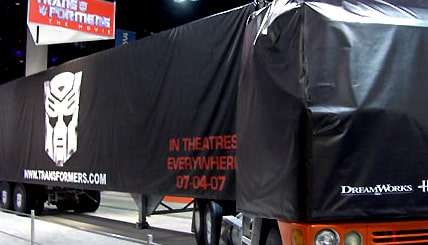 They are filming TRANSFORMERS by my job, i have pictures. They actually built some of these maniacle machines!!!!!!!!!!

what other movies are they filming like this? I think they should film another He-Man! I have a couple of pictures of these transformers.

I hope this works.

Well at least they didn’t make prime into a stupid firetruck this time around. Didn’t there use to be a Magnus, prime’s some what brother?

Well, Megatron looks like an over-the-top CGI monstrosity, and one of the doucheeist (sp?) actors of our time Shia LaDouche is in it. On the other hand, it’s produced by Spielberg.

Doesn’t matter if they’ll fuck up the movie. I grew up on Transformers 🙂

That’s exactly why I want them to not fuck it up! There’s some part of my mind still holding onto the thought that maybe, just maybe this movie will rock.

almost there not long to go

Saw the movie last night!! I thought it was cool. Autobots all looked good but I felt the Decepticons where over done. you could even tell what they looked like beside a big moving mechinical object. I also thought the made the Transformers too big. They where not scaled properly. But all in all……..I liked it!!!