Project 8 puts a rad new spin on an old series that’s gone downhill over the past couple releases. Despite constant framerate issues and the occasional stupid/silly goal (fucking Bam!), THP8 is a solid and very fun game.

The Good: Character models look amazing. Absolutely massive open environment is lots of fun to skate in. Pedestrians cheer you on as you do runs down the city streets to gain “stokens” (rad!). “Nail the Trick” is just as cool as it looks in the trailer and doesn’t get old. Career mode lets you decide how you want to play it. Integration of the 3 difficulty levels is genius. Extensive leaderboards that tracks just about every aspect of the game.

Another year, another Tony Hawk game. Can you believe this is number 8, already? I’m pleased to report that this time around, the Tony Hawk series has taken a turn for the better, and although Bam Mergera is still in the game, it’s extremely enjoyable and will most likely please long time fans of the series.

So, the deal is… Tony’s in town and he’s forming an elite group of skaters called Project 8. You then set out to skate your way up the leaderboard (starting at 200) all the way into the top 8. You start off in the suburbs, skating amongst a few town houses on a small court. But before you know it, you’ve unlocked other parts of the city and you end up with this massive environment where you can skate everything. There are no load times as you skate through the different parts of the city, but the initial load time is pretty hefty. In each part of the city there’s a set of different goals, gaps and challenges. There’s also pros you’ll encounter that have you doing some pretty fun stuff, for the most part. In case you haven’t put 2 and 2 together – the Bam pro challenge is wicked lame. And there are a few others that have you do things like hurling your body through gates and at giant bowling pins and basically make you want to scratch your eyes out. But thankfully, the vast majority are not of this nature and are pretty damn fun. I especially like the photographer challenges where you have to nail certain tricks over gaps.

In the old games, when you start a new career you chose your difficulty level. THP8 has (finally) changed that and now when you set out to complete a goal, you have 3 options. The AM level is “easy” where Pro is “normal” and Sick is well, really damn hard, in most cases. But it’s super rad to have them all there in front of you to try your hand at.

Skating around the city and doing runs is where it’s at. There’s so much to skate and it’s all laid out so well that you could literally go from one end and work your way around without hitting a wall or interrupting your run in any way. As you skate around, there’s lots of pedestrians and other skates doing their thing. When you land big tricks, they’ll cheer you on and you gain “stokens” which you can use at the shop to get new decks, tricks and pro tricks. Pro tricks being motion captured tricks of each of the pros in the game where you can act as the camera man and control the timeline. It’s actually really fun to play with and I tacked a couple minutes of it on the end of my gameplay video.

Back in September a video demonstrating the new “Nail the Trick” mode hit the net and I was all over that shit. Thankfully, it panned out quite nicely and really is an awesome addition to the series. It takes you a few times to really grasp what’s going on, but when you do, you’ll have a smile on your face for the rest of your game.

The online play is pretty solid as well. I jumped into a free skate last night with 3 other dudes. We were just tearing up the park for a few minutes until someone started a points challenge. I got my ass handed to me, but it was really fun playing against other people and hearing everyone shit talk as they pulled off huge combos. There’s a bunch of other modes that you would expect to see as well. Most of which are a good time. I found that it actually ran a lot smoother while playing online. Possibly because you’re restricted to an area of the city and there are no pedestrians wandering about.

All in all, I think THP8 is the best the series has seen in many years. Although some areas fall short like character customization, the other additions truly make up for it. Once you’ve played for a while, be sure to check out the leaderboards and see how you stack up against the rest of the world and your friends. It covers everything from your scores on every single goal in the game to how many feet you’ve manualed. Pretty awesome stuff! 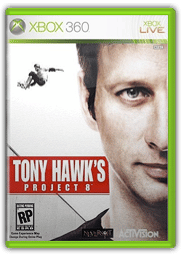 Great review! THP8 is definitely on my list of games to pick up.

I downloaded the demo a few days back and I started playing it yesterday. I’ve got to admit that I’ve probably put more hours into THP8’s demo than I have into my copy of Carbon. Even being restricted to just a small area of the city, it’s got great replay value.

Oh, knocking over pedestrians and killing your character’s pretty fun too. My record is $63,000 in for a hospital bill with 10 broken bones. 🙂

Aww man, now you’re making me sad that my TV is broken (and I can’t keep playing THP8).

One of the aspects I love most about this ame is that it’s damn hard. The last TH game I picked up was Underground… and honestly it was too easy to fly through career mode. This series if finally challenging me almost to the point of frustration (but it’s a good frustration). Some of the Sick goals are absolutely insane. The competitions pretty much force you to be on your best to beat ’em at Sick and it takes dozens of times to beat them — if you can!

In any case, for the first time since 2, I’m finally challenged by the series and I absolutely love it.

Thinking about picking this up, well its this or Rainbow Six: Vegas, really I think this one will last me longer considering Gears of War is much more fun than the Vegas demos, the THP8 demo is pretty much the only thing I’ve played bar Gears.

I was waiting for you to do a review on this game since you were totally stoked about the trailer. Sounds like a great game, I’d pick it up if I had a system to play it on.

I agree this one of the best if not the best in the series. The character customization falls way short. One of my biggest problems is that I keep kicking myself into Matrix mode skating down the street cause I pushed to hard on the stick.

I’ve just recently got back to console gaming and I’m loving the way you actually have to work the controller.

This game is definitely in the top of my list. I will be playing for a long time. 🙂

I picked up a copy yesterday but have yet to put it through the paces; just a couple of minutes messing about.

Tony Hawk games lost it at about number 2 when it started going, well just stupid really! I was overly impressed by the demo, it looked more like a real environment with real deal moves and not too much cheese.

However in the first few mintues of the game I was skating through a swimming pool and shagging Dad’s Balls. Some things will never change.

Apart from that the game does look really good, the opening trailer thing got me hooked and I really wanted to grab a deck.

With each new console comes a THPS game, and I fail to be able to resisit buying it!

Project 8 is a worthy opponent against the others and does build on their strengths. However, as you point out, the frame rate dives regularly and I am still diving into the menus to find the section to change my characters face a bit more. Fac mapping via the Vision Camera pls!!!!

Any-hoo, great review of great game, I have clocked up about 18 hours on it so far.

Lets see what EA Skate turns out like though. If its not so "silly" as THPS then it might be a winner.

I’m getting my Xbox 360 tomorrow, and THP8 are gonna be the first game to buy! 🙂

Chad muska is my favorite skater, and i think it is retarted that he hasent been in the last 2 games. And what is with not being able to creat ur own park. It has wicked gameplay but u left out a lot.

Zach: I agree with you there! Muska is a great skater and I’ve missed him in the last games.

THP8 has become one of my fave games on the 360. I kinda think it deserves more than an 8 simply for the fact there’s hours of gameplay here. I found it really challenging and could spend hours on one goal. Still haven’t attempted any Classic sick goals other than Suburbia! Anyway, I’m sure most of us agree with you in that THP8 is the best the series has seen in years.

This game has the best grafics i have ever seen. It gives a damn good challenge. The grafics deffinetly make up for leaving out the 2 player games. It dosent have very much humor like thug2 and wasteland did, but that beaver almost makes up for it. I like that you can slap in freeskate in 2 player.