Over the years, I’ve spent a decent amount of time exploring exotic locales and raiding tombs with Lara Croft. Most of which was enjoyable, but in recent years the quality began to slip. With Lara herself constantly being re-envisioned, at least as far as her appearance was concerned, I was excited when I learned of this franchise reboot. Tomb Raider takes us back to where it all began – or at least, to where Lara transitioned from a n00b archeologist to an ass kicking heroine.

Tomb Raider wastes no time in getting down to business. With very little initial setup, Lara is shipwrecked on an island and finds herself fighting for survival. She appears weak and tired, and downright terrified early on. The player is eased into the game’s exploration and combat mechanics by directing you to waypoints, and teaching you how to use a bow on helpless forest animals. Lara’s goal is to rescue her friends and leave the island, but of course, that’s easier said than done. Along the way, Lara is put through the ringer, both physically and emotionally. She’s forced to make tough choices, face extreme conditions, and accept great loss while continuing to move forward, all in the name of survival. 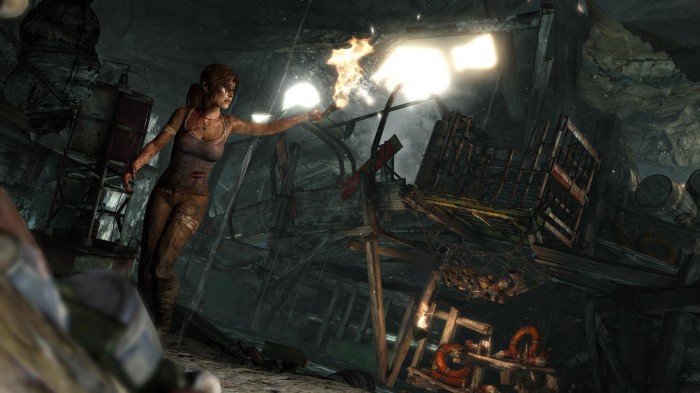 Difficulty progresses quite smoothly, although it never gets overly challenging. Especially when it comes to solving some of the game’s few puzzles. Unlike previous Tomb Raider games, this time around you spend very little time actually exploring tombs and solving environmental puzzles. When you are faced with a challenge, Lara will is quick to point out the key to solving it. Thankfully, she doesn’t think out loud automatically. A press of the left bumper enables a view that highlights way-points, enemies, ammo, collectibles, and other things Lara can interact with. Combat is much more challenging. Just when I was thinking, “I really wish Lara had a melee attack.” A new ability opened up, and Lara was suddenly able to strike enemies with her hatchet. Things got a lot easier for a while, as I found myself rushing bad guys and pummelling them to death with 3 quick blows. But the game was quick to end my reign of hatchet terror by introducing heavily armoured baddies. This happened quite a bit through-out the game; just when I thought I had the upper-hand, the table turned, and vice versa.

It would seem that the game industry is still on a bow and arrow kick. Like 2/3 of the games that came out in the past year, Lara’s primary weapon, and the one she’s wielding on the box art, is a bow. Unlike many of these other games, I thoroughly enjoyed hunting and killing with the bow, and preferred using it even after acquiring the other standard load-out weapons; handgun, shotgun, and assault rifle. Landing a headshot on a dude at long range with the bow is immensely satisfying, and likely what kept me slinging arrows through the entire campaign. That, and the fact that I never seemed to run out.

I was surprised by the level of gore in this game. Specifically, when it came to Lara dying. There are quite a few quick-time event riddled action scenes, which if not perfected, would result in Lara dying in an extremely grizzly fashion. But I will admit, I definitely died a few times on purpose, just to see how brutal it would be.

Tomb Raider feels absolutely rich with content. Beautifully rendered cutscenes set the stage and tell the story, while documents (journal entries, letters, etc) which are read aloud by their author, fill in the back story. As you would expect, Lara can track down (and steal) relics left behind by ancient civilizations. In previous games, there were bronze, silver, and gold relics. This time, each relic is a fully rendered 3D object, which Lara audibly analyses once found. This is just one of the example of the exceptional level of detail that has gone into this game.

My only real gripe with Tomb Raider, is that although it did a great job of depicting the beautiful young Lara as a strong and able woman, it made me feel a bit dirty at times. Some scenes were setup with perfect angles for peeking down her shirt, or watching her ass move from side-to-side as she scaled a cliff. I’m not sure if it’s because I’m in my thirties and she’s supposed to be early twenties, or maybe because I have a couple daughters of my own, or  perhaps because I am supposed to be Lara, but said scenes made me feel a little uncomfortable. 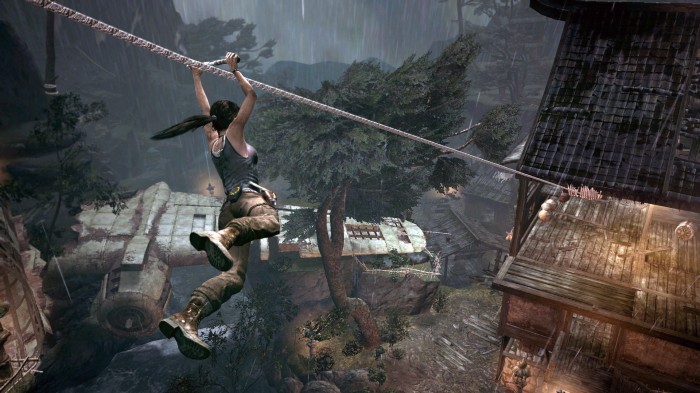 This particular reboot is one that I whole heartedly welcome, and applaud the developer for taking a chance on. It definitely nods to other games in the genre that have taken things to the next level over the years, like Uncharted, but does enough things differently on its own that it doesn’t feel like it’s ripping anything off. This is not only a great Tomb Raider game, it’s an excellent action adventure game, and one that will likely be on many “top games of 2013” lists come December. 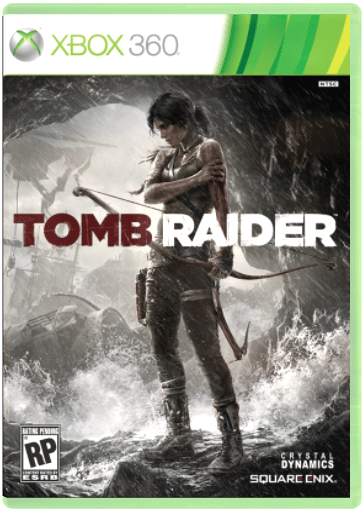 so excited to get my hands on this. hopefully this will fill the happiness hole that uncharted 3 left in me.

I enjoyed Tomb Raider a lot more than Uncharted 3. You know how about 3/4 through Uncharted 3, it started to get really tedious fighting dudes? That never happens in Tomb Raider. In fact, I found that I was actually excited whenever I knew a fight was just around the corner.

my point exactly! i was so…underwhelmed by uc3 (especially after LOVING uncharted 2) that I have been excited for tomb raider since last year’s E3…Can’t wait to get some time to actually sit down and play this.

what’s next for you, bioshock?

Indeed, Uncharted 2 was my favourite in the series as well.

Yes, BioShock Infinite is next on my list, but I’m not sure if I’ll be picking it up right away. Kind of want to focus on some personal projects for a while, and I’m actually not crazy excited about it.

I got the game the moment it got released, but don’t have that much time to play… so just finished it at 74% (there are still some collectables to be found, which I probably won’t do).

I really had an amazing time. It’s been a while since I even finished a game, so if that isn’t enough proof ^^

I really enjoyed the combat mechanics, but sometimes the tension was killing me. I really was worried the bad guys would notice my presence… but when the combat started, I had fun as well. Also really liked how fluid the controls felt. Lara jumped, grabbed, rolled and moved smooth as butter. And also controlling the weapons felt perfect.

I never felt dirty. I can only remember peaking down her shirt at one of the first cut scenes, but later on, I guess I never noticed it anymore. And I never stared at her butt ^^

The thing bothering me a little was the feeling of urgency in the cut scenes, but somehow they didn’t really convey the emotions. I noticed I started to say sarcastic remarks about the cut scenes to my wife when I was watching them. Especially in the end, when all the emotions are running ‘high’. The final scene is pretty cliche and therefor pretty dumb.

But overall I really had an awesome time playing this game. Definitely in my top 5 of 2013 (if not top 3).