Xbox One’s “system seller” has landed, and the hype got the best of me. I was planning to pick up an Xbox One later in the year, just before the Fall onslaught, but I found myself walking out of the nearest Future Shop with a Titanfall bundle just two days after release. I wasn’t immediately impressed by Titanfall, or the Xbox One for that matter. But after spending a few hours with it, the buyer’s remorse I was feeling had begun to subside. Titanfall isn’t exactly revolutionary, but it’s great fun none the less. Does it warrant purchasing an Xbox One? Well, that’s really up to you.

I skimmed a couple of reviews, and was surprised to see mention of a campaign. I thought Titanfall was strictly multiplayer? It turns out, it is. The campaign is simply multiplayer matches strung together with brief voiceover scenes as you’re transported to the battlefield. During campaign battles, the story is told via comms and a little picture-in-picture in the top right corner of the screen. Honestly, I barely grasped what was going on, as I was more focused on the action than that tiny window in the corner. The gist, is that there are 2 factions; the IMC and the Militia. Both are fighting over resources and territory in a distant corner of the galaxy called The Frontier. It seemed like an interesting enough concept, but the way it’s presented makes it difficult to absorb. Once you’ve completed both sides of the campaign, you’re able to replay any level you’d like, or jump into random matches. There are some campaign based achievements to score, so it’s worth replaying for them, if not the story.

Aside from the story fragments, there are some good reasons for completing the campaign. Primarily, this is how you unlock 2 of the 3 Titan chassis. Additionally, a decent amount of XP can be earned playing the campaign, as I ranked up to level 15 by the end of it. 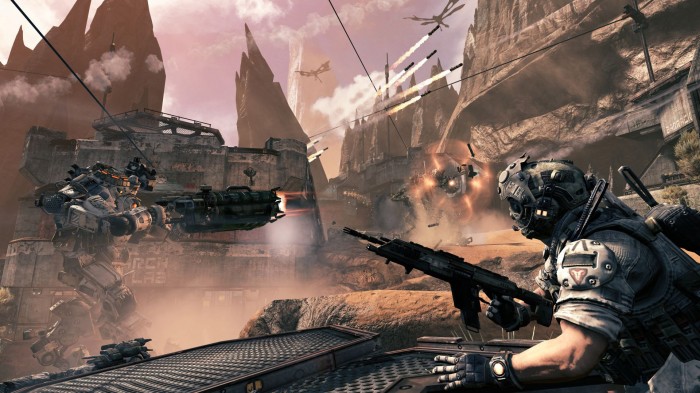 When I posted a photo of my shiny new Xbox One on Instagram (and subsequently to Facebook and Twitter), some of my friends spoke up and said things like, “I didn’t think you’d be interested in Titanfall, since you’re not much of a multiplayer shooter guy.” They’re totally right, and Call of Duty is at the bottom of my list. Seeing as Respawn Entertainment is founded by Infinity Ward vets, it does make sense for them to question my decision. In all honesty, I can’t deny a great looking game. And from the initial trailer shown at E3 last year, Titanfall had my attention. I knew it was going to be a deciding factor for me to pick up and Xbox One, and after seeing massively favourable review scores, the decision was basically made for me.

The action is fast and furious, and while there are only 12 human players in a game, the battle still feels fairly large scale. I’ve spent most of my time playing Hardpoint Domination, which is essentially Battlefield’s conquest mode, where factions vie to control points on the map. I think this is more interesting than aimlessly looking for dudes to kill. It gives players more direction, and insures there will be congregations of players in specific spots on the map, as the power struggle plays out. The game modes are pretty typical, with Last Titan Standing being the only real standout. It has all players start in a Titan, with only one life. You can eject from your Titan when it’s destroyed, and have a chance to take down enemy Titans from the ground, but if the last Titan on your team falls, the round is over despite how many pilots are left.

There is one thing that makes Titanfall unique, and that’s what happens at the end of a round. When a team is declared victorious, the losing team has a chance to evacuate via dropship. A point is highlighted on the map for both teams where the dropship will appear, and one final frantic battles takes place before the scoreboard is brought up. It’s pretty difficult to reach the dropship if you’re on the losing side, and the opposing team can actually destroy it before it departs, so there’s a very slim chance you will get out alive. I’ve managed to do it a couple of times, and there is some nice bonus XP given, and a 50 point Achievement called Refuge the first time you make the extraction. 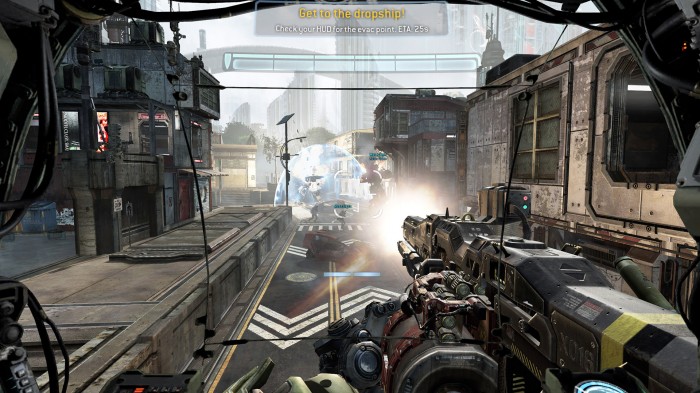 One thing I really like about Titanfall, is that rounds are short. I don’t think I’ve had one last more than 10 minutes, so it’s easy to jump in for a few rounds, even if you don’t have much time to spare. Unlike Battlefield 4, where I have to make sure I have at least 30-45 minutes to commit before jumping in.

If you’ve played a multiplayer shooter in the past 5 or 6 years, you know what to expect here. XP is calculated at the end of each round, and weapons and other upgrades are awarded each time you rank up. There are custom load-outs for pilots and titans, so you can customize both to your liking, and have several configurations at the ready. Then there are “burn cards”; perks which are limited to a single life in a round. These consist of “amped” weapons, unlimited grenades, reduced Titan build time, and that sort of thing. Burn cards make you play a bit more carefully, as to make the best of your perk. For example, I found myself turning tail and running from a Titan where I might have engaged it, when I had an assault rifle burn card enabled. Instead, I went looking for pilots and minions to kill.

Minions? Aside from the 12 human players in a round, there are AI players called minions which populate the map. There are two classes of minions; Grunts and Spectres. Spectres are synthetics, which can be hacked and turned to your side. Hacking a Spectre will also turn others near by, so you can end up with a nice little support unit in a matter of a couple of seconds.

Titanfall is surprisingly well balanced. You would assume that a pilot (human) wouldn’t stand a chance against a Titan, but you’d be wrong. Each pilot is equipped with an anti-Titan weapon, which can quickly bring down its shields and destroy its armour. Pilots can jump onto Titans, which is called “rodeo”, and fire directly at its core. This takes the Titan down pretty quickly, but leaves the attacking pilot vulnerable. More often than not, the pilot inside the Titan being rodeod will disembark and defend his Titan. When the Titan stops moving, the attacker has to decide to get off, or continue firing in an attempt to destroy the Titan. One of my Titan load-outs has the ability to set off a nuclear blast when it’s destroyed. So if someone tries to rodeo me and my Titan is already low on health, I’ll let him take my Titan down, eject, and watch him be consumed by the blast from a hundred feet above. 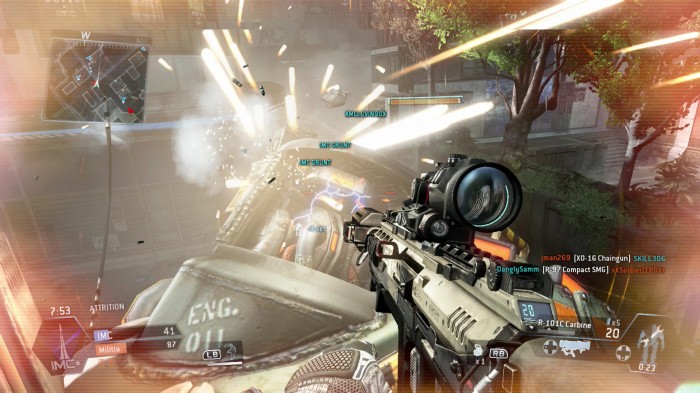 Pilots are equipped with jump-packs, which allow them to reach great heights very quickly. With it, you can double-jump and even run along walls, making it pretty easy to escape a Titan if you find yourself low on health.

There’s a pretty huge amount of replay-ability here, despite its seemingly shallow initial impression. And that’s entirely thanks to challenges. As you work your way through the XP levels, there is a huge amount of challenges to strive for. Most challenges have 5 tiers, which reward you with XP bonuses and burn cards when met. Once I really clued into how the challenges worked, I quickly started paying more attention to them; which ones I was close to achieving, and which would net the biggest rewards. Aside from netting you XP and burn cards, challenges also help to keep things interesting, in that they encourage you to continually use different weapons, ordinances, and abilities.

So, is Titanfall worth it? If you already have an Xbox One or a PC that can handle it and enjoy multiplayer shooters, then definitely, yes. Should you buy an Xbox One specifically for Titanfall? That’s a tough one. If there are other games you’d also play on the platform, then sure. But with its limited scope, it’s hard to gauge how long Titanfall will hold our attention. For now, just a few days in, it’s a hell of a lot of fun!

Update: March 29th. 2014 – After sinking more than 20 hours into this strictly multiplayer game, I’m pleased to report that it’s held my attention in a way that I didn’t expect. Even now with inFAMOUS: Second Son in my possession, I’ve found myself reaching for the Xbox One controller more often than the PS4’s. But that could have a lot to do with the limited time achievement; Early Adopter, which is awarded for reaching level 50 before the end of March.