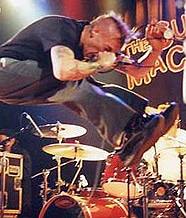 Last Fall I saw The Suicide Machines in Toronto for the 9th time. They played a killer mix of old and new in what can be best described as a ‘best of’ collection. A few times between songs, Jay (singer) mentioned how grateful they were that so many people had come out as it’ll be the last time they’ll be around for quite some time. I though for sure they were done after the tour.

When I was at HMV yesterday picking up the John Butler Trio album that finally got released in North America (and is fuckin’ awesome, btw), I noticed a new Suicide Machines record. What do you know? It’s a ‘best of’ album with 2 live tracks and 2 unreleased tracks. The ‘best of’ album usually signifies the end is near. Suck!

I figured if this in fact was the end, it would say so on their site. What’s the first thing I read in the news? Some new dates announced and a little write-up on how the new album is going. Eff yeah!

Just the sort of thing I needed to read to help get me out of this slump. Oh wait, I haven’t talked about that yet…