The Last of Us

I’m sure I’m not the only one who finds it hard to get excited about a post-apocalyptic zombie game these days. After all, they are the new WWII first-person shooter. But that didn’t stop me from wanting to get my hands on The Last of Us from the moment I first caught wind of it. Naughty Dog is responsible for some of my fondest video game memories in recent years, with their Uncharted franchise being on my top 10 all-time favourites list. So naturally, I was more than a little excited to see what they had in store for us with The Last of Us. It’s been a long wait, but one that feels fully justified having now completed the campaign. The Last of Us is easily the best looking game on the PS3, and likely of this console generation. Coupled with excellent gameplay and an incredibly intriguing story of survival and hope in a hopeless world, The Last of Us is nothing short of a masterpiece. 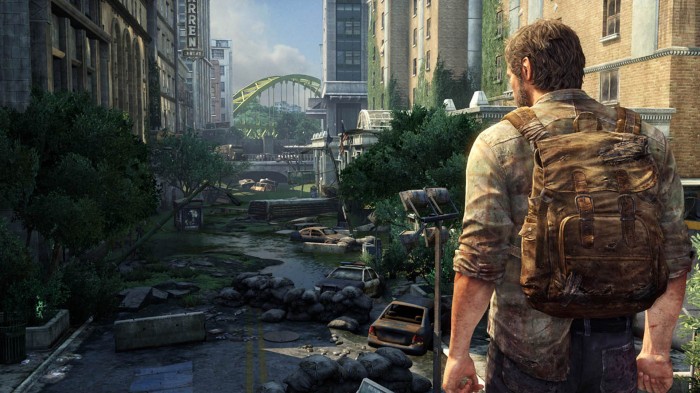 Warning – There are light spoilers ahead, specifically regarding the first 10-15 minutes of the game. Nothing major, I promise!

It all starts in a rural town in the southern States, when lead character Joel returns home from a long day of work. Through-out the night, people start acting “crazy” and things quickly spiral out of control. Joel, his daughter, and his brother try and escape the town which is now up in flames and being overrun by infected. Some significant events occur, then it jumps ahead 20 years, and everything has gone to shit. What remains of humanity is holed up in quarantine zones, and there’s little explanation as to what happened in between. The focus from here out is on the characters and their relationships, as opposed to the outbreak. All that’s really revealed, is that it’s some type of fungal disease that’s spread by airborne spores, or direct contact (scratches and bites). Infected aren’t dead, like typical zombies. They’re simply that; infected. There are 4 distinct stages of infection… 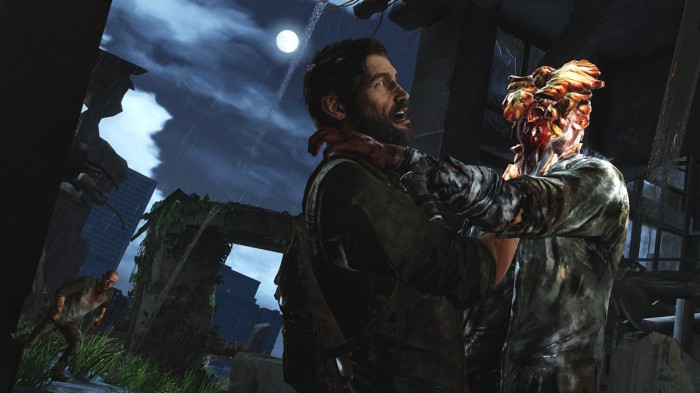 Clickers are massively deformed, with fungus sprouting from their face.

Thankfully, all infected ignore flashlights, so you can sneak around in the dark without alerting them. Much of the game relies on stealth tactics, as ammunition and health are always in short supply. My first encounter with a small horde resulted in half a dozen deaths, easy. But later on in the game, I was able to take on dozens of them with relative ease.

Back to the story – it turns out that Joel is a smuggler in this post-apocalyptic world, and you guessed it, one of the things he’s tasked with smuggling is a 14 year-old girl by the name of Ellie. They set out with the help of Joel’s lady-friend to reach point B, which turns into a trek across many state lines over the course of nearly a year. Through-out the campaign, many other characters come and go. Some acquaintances, old friends, and even family. It’s interesting to see how this fungal pandemic has affected people differently, and how they’ve been forced to adapt to this new way of living.

Since the story spans several months, the seasons roll by, and you get to experience some of the most beautiful scenery ever presented in a video game. I lost track of how many times I just stopped to pan the camera around to take in the view. Often, Ellie would say the words that were going through my head at that very moment, “You can’t beat that view, huh?” Seriously. 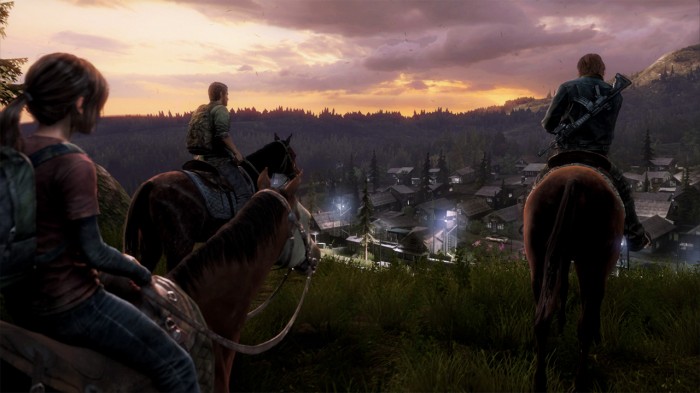 Similar to The Walking Dead, while the infected are a massive threat, at this point when civilization has fallen, the remaining humans are a much greater one. Everyone is desperate for food, clothing, shelter, and the means to protect themselves and their loved ones. And don’t forget, the story is set 20 years after the initial outbreak. Everything is scarce, and these people haven’t known civilized life for decades. Some of them, like Ellie, have been born into this world, which provides for some excellent dialogue through-out the campaign, as she’s oblivious to the way things were prior to the outbreak.

One of my favourite aspects of the game, is that it never really takes you out of the game, once you’re in. Joel wears a backpack, and anything that won’t fit in a hostler is carried inside it. Scrap is collected along the way, and certain objects can be crafted once you’ve obtained the required ingredients; med kits, shivs, molitovs, nail bombs, smoke bombs, etc. But the kicker, is that Joel has to bend down, pull out his backpack, and craft the items wherever he might be. If you’re in the middle of a fight and need health, there’s no quick button push that will restore it. If you have a med kit, Joel will pull it out and bandage himself up. If not, you’re going to have to craft one first, then use it. This can make for some pretty intense moments, when you find yourself surrounded and the screen is tinted red.

Character models, and specifically facial expressions are phenomenal. Ellie’s face at times, can be absolutely heartbreaking. You can’t help but feel bad for this young girl, who likely never had a real childhood, and is now forced to kill infected and humans alike, just to live another day. Although she clearly has a tough outer shell, she’s still very much a child, and lets out a bit of silliness here and there. One of the collectible items is a comic book series Ellie expresses interest in early on. Nearly every time Joel finds one, she gets all excited. 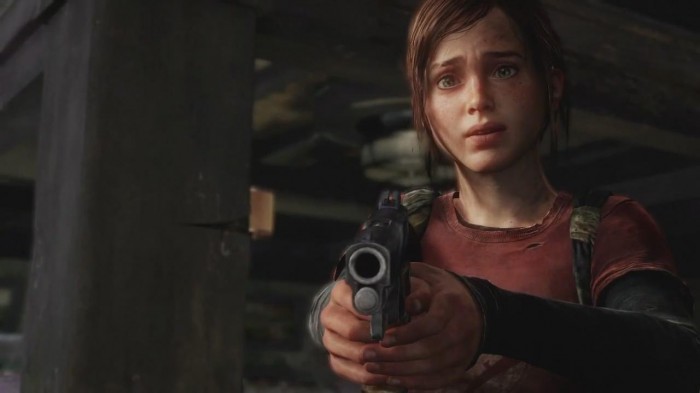 It should come as no surprise that the voice acting and motion capture is superb. As Naughty Dog did with the Uncharted franchise, they had the voice actors do the motion capture work for the characters they portrayed, which makes the characters’ mannerisms extremely natural, and perfectly in sync with their voices. And speaking of voices, there is quite the cast of actors here. I recognized a few myself, but some others I wasn’t able to place. Most notably, for me anyway…

As great a game as The Last of Us is, it’s not without a few faults. With every other aspect being of such high calibre, I was able to look past them fairly easily. The biggest complaint I have is with AI, both enemy and friendly. As I mentioned earlier, the game relies pretty heavily on stealth at times, but quite often enemies will be completely oblivious to allies being out in the open or making a lot of noise. I suppose this works in the player’s favour, as you don’t end up throwing the controller at your TV for an ally giving away your position repeatedly, but it takes away from the immersion. Similarly, human enemies will usually walk right by a freshly fallen comrade without a second look. 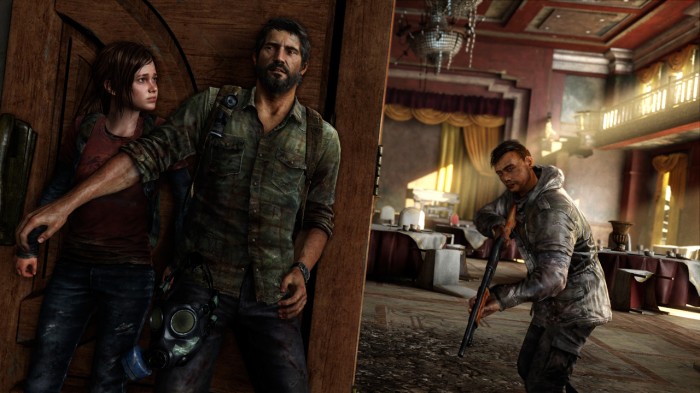 My final complaint is with the ending. And not specifically what happened, but the way it unfolded. It felt like, for a second, I had a decision to make. And I was really torn, until I realized that I didn’t really have a choice. I had to perform a single action that was put in front of me, that I really didn’t want to. Putting the choice in the hands of the player wouldn’t have really made sense, since there are no other scenarios like that in the game, but I would have rather seen things played out in a cut-scene.

While I’ve heard some good things about the multiplayer, I haven’t yet played it. I may at some point, but I feel like I got my fill out of the campaign, and will be starting round 2 in the near future.

It’s not often a game of this calibre comes along, and it truly is something special to experience. It’s moments like this that I wish everyone I know had a PS3, or that this was a cross-platform release, so more of my friends and family could experience it. Sony’s lucky to have Naughty Dog in their corner, and it’s one hell of a way to send the PS3 out. I’m really optimistic about this game. Definitely one of the first I’ll be getting when I finally get my PS3, I’m almost regretting buying an Xbox 360.

Having completed the campaign, I initially had an issue with the ending that didn’t sit right with me. Without giving too much away there is a slight choice to be made but I can see where you’re coming from. It takes a brave game to finish this way and Naughty Dog certainly delivered.

The multiplayer is surprisingly addictive and relies heavily on the skills you’ve learnt throughout the singleplayer campaign. This is certainly no “run and gun” Call of Duty type experience, you need to work with your team-mates to tactically take down the other team and it impresses!

Easily one of the best games I’ve ever had the honour of playing.

Did you watch the Making of documentary after playing the game? I definitely recommend it!

Yeah, I just watched it a few days ago actually. I love seeing voice actors doing their thing. Especially with Naughty Dog games, since they also do the motion capture.