Now, first off. I am only one man. One busy man at that. But I do feel I’ve put in my fair share of hours into gaming over the past year. Some of these hours spent playing games that may not have come out in 2004, but may have still been amongst the best I played. Also keep in mind that I don’t own a PS2. So you’re notta gonna see any mention of Snake Eater or San Andreas in here. Anyways, of all the amazing games that were released in 2004, here’s my top 5… 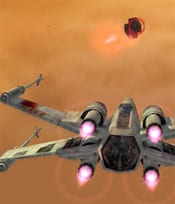 Being a huge fan of Battlefield 1942 – and even the Star Wars mod (Galactic Conquest) that was released for it. I was crazy stoked on Star Wars Battlefront from the get-go. Alright, I may have been a little skeptical at the beginning. It being such a blatant rip-off and Lucas Arts’ inability to produce a solid game. But that skepticism was nixed as soon as I got my hands on it at X04 last September. It took everything that made BF1942 so great, and basically just fine-tuned and re-skinned it. You finally got to play those huge, epic battles you’ve (ok, maybe just me) watched over-and-over again through-out the years. They really did a great job of this game. Amazing! 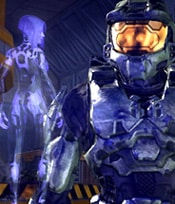 Surprised Halo 2 only made number 4 on my list? It’s a great game, don’t get me wrong. It was just a little disappointing in the story and cinematics department. And as Halo: Combat Evolved got a little tiresome shooting the same 3 aliens over-and-over-and-over again. So did Halo 2. It seemed Bungie may have raised the bar a little too high for the Xbox as well. The cinematics are just plain ugly. I realize they’re all real-time renders, which is cool. But, come on! The textures swapping from low to high res, 2 seconds into the scene – what’s up with that? Did no one notice that? Of all the 5,000 beta testers, did no one mention this? Uggggggly! But, the multiplayer is wicked fun and doesn’t have any ugly cinematics. So it (some what) makes up for it. 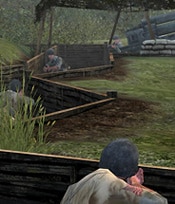 I’ve never felt so involved and completely immersed by a game, like I was when I played Call Of Duty. The battles are so intense and chaotic. There’s bullets flying from all directions, squad mates yelling commands and all the while, you’re trying to complete a list of objectives. Just pure insanity! The single player experience was fairly lengthy and spanned 3 campaigns – American, British and Russian. All of which were fun to play for different reasons. The last few missions, ending with The Battle For Berlin were just insane! I actually played them through twice, back-to-back. The multiplayer is also quite good and carries the same intensity as the single player campaign does.

2. The Chronicles Of Riddick: Escape From Butcher Bay 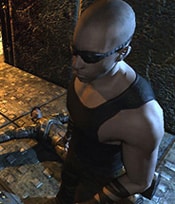 Nope, not a mistake! As you may have read previously, I loved this game! It was a complete shock to everyone that this game was actually good. No, not just good, great! The story could hold it’s own to blockbuster movies, the dialog and voice acting was bang-on and the combat was totally satisfying. The diversity through-out the campaign came as a totally shocker. You start off with no weapons and have to fight your way up the ranks in the prison yard. Eventually you over-throw the head gaurd, and that’s when the real fun begins. 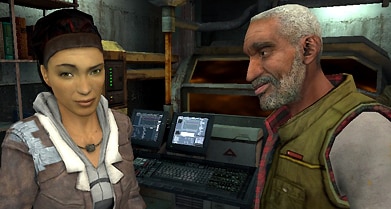 First of all, I bitched and complained about Half-Life 2 for the past year. The broken promises and over-exposure forced me to grow sick of it before I could even play it. It seemed as soon as Valve announced the November 16th release date, that all disappeared. And now that I’ve played it – I feel like a total douche.

With that said, this game is fuckin’ amazing! It completely surpasses every other game I’ve played (ever!) on every level. The physics engine takes first person gaming to an entirely new and exciting level. When you walk into a room and need to a find a way up to a high ledge – you normally look around for a couple platforms to leap from and you’re there. Now you have the ledge, a bunch of boxes and barrels and a gravity gun to pick them up with. Build yourself some steps and you’re good to go. Amazing!

The voice synchronizing is perfect and the facial expressions on characters are totally realistic.

One of my favourite aspects of the game, though – is the sound effects. They kept so much from the original game and it was refreshing to hear them again, after so many years.

The weapons and combat are perfect. Seriously, if I could, I wouldn’t change a thing. The guns are so big and satisfying. And the fact that you start off with nothing but your trusty crowbar is just awesome! The gravity gun, although not technically a weapon, is perhaps the single greatest addition to the game. For those that haven’t played, the gravity gun allows you to pick up heavy objects and place or project them. And you can pick up absolutely everything. If you take a wood table and smash it against the wall into tiny pieces. You can pick up each and every one of those pieces and toss them as well. Saw blades make great projectiles, as do explosive oxygen tanks. Gold!

Anyways, I’ll wrap this up, cause I could probably go on forever. Play this game. Pay the $50 for it. Get whatever upgrades you need, and play it. You won’t regret it.

And lastly, speaking of upgrades. Half-Life 2 runs better on my system than most recent games. Including Far Cry, Medal Of Honor Pacific Assault, Battlefield Vietnam and even Doom 3.

Burnout 3: Takedown
Best. Crashes. Ever! Seriously, I was completely blown away by the crashes in this game. You’ll be tearing ass down a stretch of highway, then got a nudge that sends you head on into an 18-wheeler. The music stops instantly, shattered glass and torn metal everywhere, and your wreck (which used to be your car) in slow motion as it screeches across the pavement. Gold! – every time!

Doom 3
Yes, it did look fantastic and it did manage to make me pinch my butt-cheeks quite frequently. But it also got old, fast. I never did get around to finishing it. Hmmm, maybe I’ll… naaaaah…

Far Cry
I only really heard about Far Cry a few months before it was released. I was totally blown away by the beautiful environments, intelligent AI and fancy physics. I only stopped playing it cause my computer couldn’t handle some of the later levels that great.

Ground Control II: Operation Exodus
I put a ridiculous amount of hours into GCII when I first got it. It was the first RTS (Real Time Strategy) game that I really enjoyed. I think a lot of it had to do with the cool free-look camera system it has. It really took you away from the standard locked-camera and brings you into the battles. I’m pretty sure I’m the only one on the planet that even played this game. Pick it up if you’re into futuristic warfare or RTS games. It’s only $20 at EB Games right now.

Lord Of The Rings: The Battle For Middle-Earth
Again, I’m not a huge RTS fan, and I hate the LOTR series. But some how, I love this game. Within my first couple days of installing it, I swear I put in about 10 hours of gameplay. Very fun and pretty diverse, as far as RTS goes.

Need For Speed Underground 2
I loved the first one and was really stoked on the second one. A couple things put a bit of a damper on things, though. The in-game advertising was horrendous. Gamespot did a nice job of mocking it in their year-end wrap-up. The other big thing I didn’t like, was the trade-in feature. In the previous game, all your upgrades went with your car when you traded it in. Not the case in NFSU2. Now, you trade in your car with thousands of dollars worth of upgrades, for nothing. No cash-back… sorry bud, you got jacked! Man was I pissed when I found this out… the hard way.

Panzers: Phase 1
Another RTS game no one played. 2003 was year of the WWII FPS (First Person Shooters). 2004 – WWII RTS. There was quite a few that came out, and I tried most of them. Axis vs Allies, D-Day, Soldiers: Heroes of WWII… but the only one that got it just right, was Panzers: Phase 1. They used motion capture for the soldiers, which made a world of difference. It was the only game that bravely included German missions. I didn’t actually play those missions – but they were there for those that wanted to. It looked awesome, played great and the fully destructible environments made a world of difference.

Unreal Tournament 2004
I’ve been an Unreal fan since the first UT. This latest installment did not disappoint! The addition of Onslaught mode with vehicles is insanely fun and addictive. The music is so dramatic and I found myself completely immersed by it. As far fetched as it is, it’s still an amazingly fun, fast-paced FPS.