When it comes to Super Mario games, I’m an absolutely sucker. After the Wii, I thought I was done with Nintendo. But they got me with Super Mario 3D World, and they’ve managed to reel me back in with Super Mario Odyssey. If the games were shit, I’d be kicking myself for falling for it, again. But the Switch has been getting plenty of use in the few short months it’s been in the house.

Super Mario Odyssey is a 3D platformer, much like Super Mario 64, Super Mario Sunshine, Super Mario Galaxy, and Super Mario 3D World before it. And like each of those titles, brings something entirely new to the franchise. This time, Mario’s hat has been given a persona of its own, Cappy. Allowing Mario to “capture” enemies (and objects) and become them, Cappy basically replaces power-ups and gives Mario more abilities than ever before. Cappy can also be thrown at enemies, and used as a launching platform to perform longer and higher jumps. 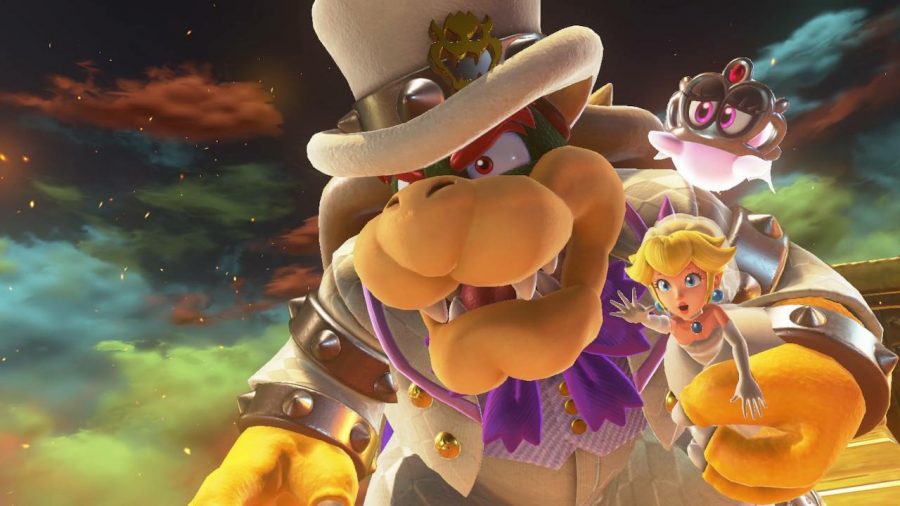 The story is exactly what you’d expect – Bowser has kidnapped Peach, along with Cappy’s sister Tiara, and you set out to save them. Along the way, you collect Power Moons to power up the Odyssey, a ship Mario has found that allows him to travel to different kingdoms. In each kingdom, you have to obtain a certain amount of Power Moons before moving on. A total of 250 Power Moons are required to complete the story, but it doesn’t stop there. As soon as the credits roll, you’re encouraged to go back through the kingdoms you’ve already visited and collect the remaining Power Moons, with a new goal of 500 set in front of you. But it doesn’t stop there! A total of 999 Power Moons are scattered through-out the kingdoms, and some are extremely challenging to acquire.

Super Mario Odyssey crosses the 2D/3D barrier in the most cool way imaginable. Through-out the kingdoms you’ll find warp pipes which lead to 2D levels. Often, the 2D level is wrapped around a 3D landscape, and looks just awesome. The music changes to an 8-bit version of the theme that’s currently playing, while gameplay is spot-on with the Nintendo classic, Super Mario Bros. Some of these 2D levels provide the biggest challenges in the game.

I found the initial play-through to be quite easy. Never having died during a boss fight, I was disappointed that it didn’t really challenge me. That is, until I started hunting down Power Moons after the story was complete. New areas open up, and each of the main boss encounters can be replayed at an increased difficulty level. This is where the challenge lies.

Super Mario Odyssey is a fantastic entry in the long-running franchise that introduces exciting new mechanics, wonderful new kingdoms, and maintains the best-in-class platforming we’ve come to love and expect.