As many of you did, I picked up Halo: Reach on release day and have been enjoying my time with it immensely, for the most part anyway.  There have been a few low points in the campaign so far, but there’s been a common factor in each case – some form of motorized vehicle. It seems that even with all of Bungie’s experience and the massive development team that backs their Halo games, they still haven’t been able to nail AI behaviour when it comes to driving vehicles.  This mental short-coming of my fellow squad mates has led to some of the most frustrating moments I’ve experienced playing video games in recent years. 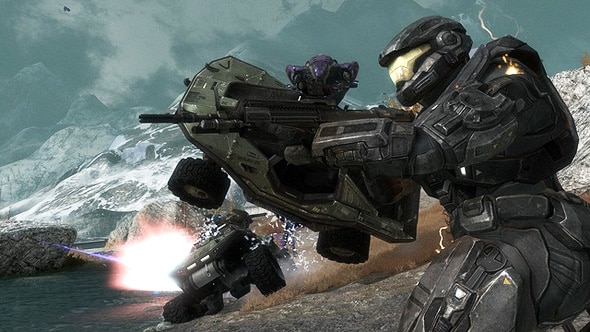 Typically when I’m playing solo, I drive the vehicle and let AI characters man the turret and ride shotgun.  Even if their aim isn’t quite as accurate as mine, they still do pretty well, and I can focus on running over baddies, or getting us the hell out of the way when things get heated.  In previous Halo games, there have been a couple types of gun turrets on Warthogs.  There’s your typical machine gun with a never-ending supply of bullets, and a mounted rocket launcher.  In Halo: Reach, I’ve already seen a couple new variants that made me quickly hop out of the driver’s seat with hopes of having a jolly old time blowing shit up with the new guns.

My enthusiasm was cut short when the driver took us over a huge boulder, resulting in a roll-over, followed by a quick death.  The next attempt was a little better – we made it through the canyon, but a sudden stop directly behind another giant boulder quickly did us in as I pressed the fire button just as we came to a stop, and blew us the hell up.  Third time’s the charm, right?  Wrong. While we did manage to take out all of the ground forces, there was a high class Elite on the roof of a nearby building firing giant glowing green globs of plasma at us.  As I lined up my shot while we rounded the building on the high side, the driver abruptly stopped.  Within seconds, or Warthog was hurling through the air, and quickly brought to an end by a few consecutive shots of plasma.  At this point, I had had enough and took the wheel.  It ended up taking 2-3 times longer to clear the area with the AI on the gun, but we did survive. 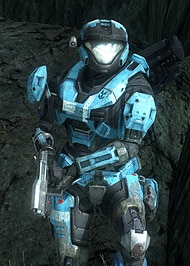 Did I mention that this spectacular wheel-man was a Spartan?  Indeed, it was none other than the lady Spartan, Kat.  And it’s not only her driving skills that are in question – this bitch is an idiot! Shortly after the Warthog fiasco, we were set on taking over a building occupied by a handful of Grunts, an Elite, and two Hunters.  The Grunts and Elite were no problem on my own, but Hunters require bait, as they’re only vulnerable on their back.  Went the room was cleared except for the Hunters, I looked around for Kat, but she was nowhere to be seen.  I noticed a blue arrow indicating the location of my MIA teammate and proceeded to follow it.  I ended up back at the beginning of the section where some barriers were setup to prevent us from taking the Warthog in, and there was Kat, in the corner, jumping constantly, trying to jump and squeeze through this tiny opening instead of just walking through one of the others.  I totally face palmed at this moment, then proceed to melee her in the back of the head until she figured out how to get around. 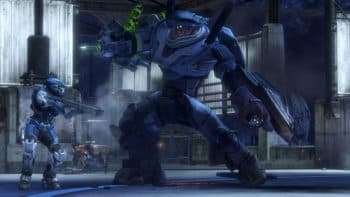 Halo: Reach has been everything I expected it to be – a grand Halo experience, with lots of new weapons, vehicles, and locations to quench my Halo thirst.  But these brutally stupid AI moments have really put a damper on the experience.  From the dev diaries I’ve watched and read, I know that Bungie has their own permanent testing facility, where they spend months putting their games through the paces before they’re shipped.  Knowing this, makes it even more mind boggling how something like this made it into the final game.  I thought that perhaps it was an isolated incident, but when I ranted on Twitter about this experience, several others replied stating similar claims.

Typically, I like to play through a game on my own first, then jump into multiplayer, followed by a second play-through with a co-op partner or two.  There have been a couple times during Halo: Reach’s campaign that I considered recruiting a friend to hop in to replace some of the AI dummies, they’re that bad.  At this point, I’ve completed 6 of the 10 levels and figure there likely won’t be any more moments of frustration like I endured early on.  Or at least, that’s what I’m hoping for.

The AI teammates in Campaign are utterly useless, I agree.

That’s why people flock to Halo for its multiplayer, which is polished to perfection.

I feel like most of the AI in all the Halo games has been spotty at best… especially when they are at the helm of a vehicle. You’d think they’d be able to fix this by now. Haven’t had a chance to get my hands on Reach yet but will definitely be doing the driving if I do 🙂

It’s true, poor AI is nothing new to the Halo franchise. I guess I was just set back by how bad it truly can be. Although you’re among plenty of other soldiers and Spartans, it still feels like you’re flying solo.

I gave up playing with the AI a long time ago, in fact I can’t even remember the last time I played campaign solo. I remember in 2 the endless circles some of the drivers would do until eventually they were blown to pieces. For a game that bills itself as more of a team-shooter than any before it, Reach AI just flat out sucks.

Yeah they seem to be particularly dumb when it comes to the warthog in this game. I too have decided it was a better idea to drive (mainly because I prefer the experience) and every time I get in a vehicle the marines just stand around until you literally park next to them so that they can get in too.

They also tend to get in my way when driving and are constantly being hit or having to dive out of the way.

Frustrating to say the least.

Honk the horn. That usually clues them in that it’s time to roll.

Maybe it’s just me but, I don’t ever count on the AI except to man the guns on a Warthog.

I’ve also been playing this game the same as the others. I operate as if i am the only Spartan out there and go kick some ass. Most of the time I forget there is another Spartan with me. Except when I see that big ass guy walking around slowly with his mini gun.

Same here. There have been a couple tough battles (playing on Heroic), and when I’m assessing the situation, I rarely take into account the AI characters. They seem to be able to take down the little guys – Grunts and the occasional Jackal, but I’m yet to see an Elite taken down at the hands of an AI.

Exactly. It’s sad that they marketed(somewhat) this game a squad based, they even preach it in the opening cinematic. But when it comes down to gameplay it totally goes out the window because of terrible teammate AI.

Although I don’t really care. I like the idea of being the 7 foot tall badass spartan on my own.

This guy’s article is spot on. I’m not into HALO’s multiplayer, because it’s not my thing. You’d think they’d release the campaign with better AIs. Presently, they’re dumb as shit, block shots, crowd you out of cover, and they can’t drive or even operate the WARTHOG’s weapons correctly.

After reading this little rant I decided to go through the campaign with a coop partner, just to make sure stupid AI doesn’t break the experience.

Even thought I play with another guy I can’t help but notice that the rest of Noble Team is simply USELESS. Too bad – I guess Bungie could figure out the AI at least for their last game. Right?

Dude, I completely agree with Kat. I’m a little late to the game, I just got it today. But, I had no idea where I was going, so I got on the chain-gun of a ‘hog and let Kat drive, worst mistake. While I’m on the gun, Kat drives up onto a ghost and stays there. I figured she was stuck, so I got in the ghost to move it. I just got out of the ghost when the dumb broad runs my ass over with the warthog! I tried it again and 2 minutes later, instead of going over a little bump in the all-terrain, upgraded, military grade truck, she spends 10 minutes inching back and forth to go around the bump :(. What ever you people do, don’t let Kat drive, she is much better at gunning. The only good thing I can say about her is that she can take a beating. I was in the gunner seat with our “favorite” spartan as a driver. She rams a kamikaze grunt, killing it, and parks on the grenades!! They blow up, I die, the truck explodes, and I just see Kat crouching next to body shooting skirmishers and yelling at me to get up and fight. CAN’T THE DUMB BROAD SEE THAT I’M DEAD!!!

I meant that I agree with you on Kat in the first sentence.