Some Great New Features Coming to WordPress in Version 2.7

I’ve been running WordPress 2.7 since beta 1 on my local dev server, along with a recent client site which required threaded comments. Instead of going with Brian’s Threaded Comments plugin, which I’ve used a few times myself including my own blog, we made the decision to move forward with 2.7 despite it still being in beta. During my time spent in the new admin and learning the template changes that have occurred, I’m really happy with the progress made since 2.6 and feel that WP is truly moving in the right direction.

We were treated to a lovely fresh of the traditional WordPress admin in version 2.5. Here we are at 2.7 and with a complete overhaul of WP-Admin. While I’m sure there will be a fair bit of resistance adopting the new admin, I’m happy to admit that it’s grown on me quite quickly! 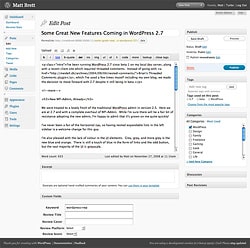 I’ve never been a fan of the horizontal nav, so having nested expandable lists in the left sidebar is a welcome change for this guy.

I’m also pleased with the lack of colour in the UI elements. Grey, grey, and more grey is the new blue and orange. There is still a touch of blue in the form of links and the odd button, but the vast majority of the UI is greyscale.

Along with the visual upgrade, WP-Admin has received more AJAX love. There’s a new “quick edit” link on the Edit Posts page which gives you access to the post title, categories, tags, and other meta information instantly.

Software Upgrades are a Piece of Cake!

My personal favourite feature so far, is automatic upgrades. Just like plugins, WordPress itself can now be updated with the click of a single button. While the upgrade is in progress, a maintenance message is presented across the site – “Briefly unavailable for scheduled maintenance. Check back in a minute.” And “a minute” is about all it takes, if that. I’m hoping there will be a template introduced for the maintenance message, as it’s simply a basic white page with large black text at the moment.

A couple major versions back, the plugin management page received a bit of an overhaul. Instead of a single list, they were sorted in multiple lists by active state. Shortly after the WordPress.org plugin directory was born, automatic plugin upgrades was added to WP. They’ve taken things one step further now, by allow us to search the plugin directory and install plugins right from WP-Admin. For those plugins hosted elsewhere, there’s an upload option which unzips and installs the plugin for you. No need for FTP transfers!

One thing that took me by surprise, was common elements being turned into functions. The search form, for example, doesn’t require a template at all. If you don’t need to customize it, you can simply call via the new template tag and it will be generated automatically. <?php get_search_form(); ?> is all you need.

Similarly, comments have been pulled out of the template almost entirely. Where the comments list is normally found, a single template tag is in its place – <?php wp_list_comments(); ?>. This turned out to be quite the roadblock when I discovered it, since the layout I had done in the design mock wasn’t possible to impliment without changing the markup. At this time, there is no documentation to be found regarding the customization of the comments list, but we’re not totally bound to using the same layout. There is a class assigned to each element that makes up each comment, so with a little CSS trickery, you can customize it quite a bit.

So, are you looking forward to WP 2.7, or does all of this make you want to stick with 2.6.x? I’m pretty excited about it myself, but am worried that I’ll have to stick with my threaded comments plugin as opposed to using the built-in function. But overall, there’s a lot here that makes things easier when it comes to theme development and maintenance.

I’ve also been running WP 2.7 beta 1 on my local server and I love it so far. The new dashboard is a huge improvement and being able to customize the elements on each page is amazing – not only for me, but for clients. Nice to hear about not needing a searchform.php file either. Can’t wait for it’s release.

Indeed, I love that you can even drag items across columns. I wonder if your preference is stored in a cookie, or in the database? It would be nice if I could login as a client and hide all the stuff that they don’t need access to.

I’m pretty sure your preferences are stored in the database. I’ve logged in to my 2.7 admin on multiple machines and the dashboard always stays the same.

I’m very excited. Would love an official release date, but I can hang on for a few more days 🙂

In your first screen, are you using the Flutter or More Fields plugins to create your custom field block, or is that a new feature of 2.7 (custom write panels)?

I’m using an older plugin called Custom Field GUI. Flutter looks pretty damn nice, but I don’t like how it acts as a full custom write screen. There’s been a couple plugins that have done that sort of thing in the past, but the problem is – they aren’t backwards compatible, and development trickles off so they become incompatible with newer versions of WP.

Don’t know if you’ve used the More Fields plugin (http://wordpress.org/extend/plugins/more-fields/) – I’m trying it on a cleint’s site right now. So far I don’t see any issues with 2.7 Beta 3 and it also has a pretty nice interface.

The interface is much easier on the eyes, and I haven’t noticed any duplicate custom field issues. This seriously should be a core feature of WP.

Oh, nice! I haven’t heard of this one. It’s crazy flexible, which has already got the wheels turning.

I tried it out locally, and it does indeed look a lot better. Not perfect in 2.7, but I’m sure that will get fixed sooner or later. Just uploaded a screenshot to Flickr.

2.7? Wow, things have moved forward since I last used WordPress. My old blog (currently offline, existing only as a backup) is still a WP 1.5 install. :p

Very exciting! I agree that the automatic upgrade is a huge step forward.

Given how it’s still in beta, would you say that it’s bug-free enough to use ‘in the real world’ (as you’ve done)?

The only thing that worries me about automatic upgrade, is the thought of client upgrading their install, then a plugin is incompatible with the new version, or a core function changes. Which of course, results in an emergency fix from the developer – aka, you and I.

I’m not running 2.7 on my live blog – only locally. And the client site I used it for isn’t live just yet. That said, I haven’t encountered any show stopping bugs. They seem to be making changes mostly to the admin UI at this point. They just rolled out the new icon set in the latest version (seen in my screenshots above).

I’m a man that likes a custom backend, but I have to say that some of these features are pretty cool. I read another article about WP on another blog too and everyone seems to be agree that this version is going to rock.

I’ve been using WP 2.7 Beta 1 for a about a month now and I must say I’m loving it. Before I tried it I was thinking about moving over to Expression Engine but I’m very glad I’ve stayed with WP.

I did make the switch from WordPress to ExpressionEngine… and I totally regret it. Though the customizability in EE is very nice, it just can’t match the insane amount of plugins and support for WordPress… and with this new WP-Admin interface, I’m very seriously considering switching back.

wp_list_comments() is tricky, and indeed not documented yet. I needed to change the markup as well, and it’s not that hard. It’s done by adding a callback function to wp_list_comments(). I suggest looking at the Prologue theme in SVN.

prologue_comment() is defined in functions.php:

Ah, very nice! I didn’t have enough time to really dig into it, and it wasn’t a super urgent matter. Thanks for sharing this, though. Will definitely come in handy.

It looks more than promising although the admin panel will take some time getting used to.

I’m just wondering how the new template engine will affect current templates. Looks like I’ll have to rebuild them a bit if I want to go with 2.7 on my blog.

I can’t wait, new features are always so exiting! The auto update sounds great, but i am with the people saying custom fields needs intergrating.

Good to see WordPress taking some steps in the right direction. Love the look of the new admin panel (I’m a greyscale fan too.) and the ability to update WordPress with a single button click is a huge plus as well. Can’t wait to give it a go when everything finally comes out of beta and goes live!

[…] there have been some great posts this week from the likes of Simon Collison, Elliot Jay Stocks, Matt Brett and Greg Wood.Ã‚Â  You really didn’t need anything from […]

It doesn’t take a lot getting used too, even though it may seem like a major change at first impression.

Most tasks just seem easier in the new UI.

Dude these are some sweet features. Just wondering, are the 2.6 template tags still available?

I’ve been using Movable Type for a couple of months now. Have you used MT before? If so, how do you feel it compares to WP? I’m curious.

I am trying to design a new theme for my blog running WordPress 2.7, but I can’t seems to get the reply link to work. I am using the callback in order to customize the layout of the comment section, but comment_reply_link outputs blank. Anyone can shine a light for me? Thanks!

I am new to this Web Design blog, and i install wordpress as a part of clients websites to allow them to keep customers updated on offers etc.

I have never integrated it into a website, completely as you have. We mainly do this for professional companies and small businesses so itis not often that something creative comes along. I love this site, and it has made me want to have a go at designing my own completely through wordpress. Do you have any tips for me?

Oo and also the brand new Admin area is beatifully layed out. To be fair, it did look a bit poo before, so i am glad they jazzed it up!

It took me a while to adapt to 2.7, but there are several new features that are fantastic.

In the recent 2.7.1 update, you can now upgrade to the lastest wordpress version without having to download, and re-upload. Just got to make sure that you download from the remote view before uploading anything.

Another great feature in 2.7 is the ability to customise the screen by removing things from the Dashboard and Write pages. This is great for setting up user accounts for clients, you can remove the complicated parts like excerpt, tags etc.