In Call of Duty: World at War, the series makes a jump back to World War 2 and development was handled by the folks at Treyarch. Call of Duty originated with Infinity Ward, who handled the first, second, and fourth games. Treyarch developed the Xbox/PS2 exclusive titles a few years back, along with Call of Duty 3. In other words, Treyarch are the filler studio who produce the less than stellar games between Infinity Ward releases. At least, that’s how I viewed them before I played World at War. I feel that I owe them an apology for all of the shit talking I did in the months leading up to the game’s release, as they deliver a fully competent COD sequel built on top of the critically acclaimed Modern Warfare. While it might feel a little too familiar at times, I was surprised time-and-time-again through-out the campaign, at the quality of this fifth major COD game.

When I first sat down to play the game, my eyebrows raised immediately as the gorgeous stylized cinematic intro brought me up to speed on when and where we’re at. Thankfully, these beauties continued between to play between each mission and were a treat each and every time.

Along with the gorgeous cinematics, the graphics and sound overall are top notch. The music however, well, WTF? I’m not sure who though throwing heavy electric guitar in the mix would be a good idea, but hopefully they no longer have a job in that department.

World at War bounces between two major campaigns – the Pacific assault, where you’re an American soldier battling the Japanese, and the siege toward Berlin as a Russian soldier fighting Germans. They play completely different, as weapons and environments are nothing alike. The balance between the two is very well done and I found that I wasn’t favoring one over the other, nor was I disappointed when the direction suddenly shifted. 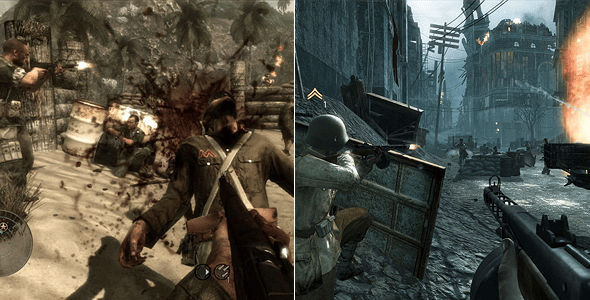 The tell-tale sign that you aren’t playing an Infinity Ward game is with the enemy AI. As with Call of Duty 3, there are spots where you’ll actually see enemies spawn in. But worst of all, it’s blatantly obvious where the action triggers are. By that, I mean the spots you need to reach to trigger the next sequence in the level. In some situations, you could sit there picking off enemies all damn day and you wouldn’t get anywhere – they’d just keep on coming, until you crossed the invisible line that tells the game to progress to the next part. I never noticed this sort of thing with Infinity Ward games, but it seems like there may as well be big red flags with Treyarch at the helm. This can be particularly frustrating when there’s an area you know you need to reach, but the stream of constantly spawning baddies is preventing you from moving forward. 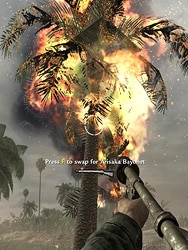 Of the new goodies in your arsenal, is the flamethrower. Fire seemed to be the trend in 2008, and I have no complaints in that regard. Burning shit is fun. Burning dudes hiding in trees is even more fun! I couldn’t have been more excited when my commanding officer told me to run up the beachhead, grab the flamethrower, and clear out the emplacements. And from that moment on, I didn’t put the flamethrower down if I had the choice.

Something entirely new for the COD series is co-op play. I really didn’t know how this would play out, but it works quite well, with support for up to 4 players total. There is a down side, though. And that’s how it can be noticeable while playing solo that an area is designed for more than one person. During my first play-through, I often wondered why there was four mortars, or an abundance of weapons to pick up. I then realized it was in preparation for co-op play. Co-op picks up basically everything from Halo 3, where you can keep score collectively or competitively. There’s also “death cards”, which are the equivalent to Halo 3’s skulls.

Of course, there’s another co-op mode that has received plenty of attention – Nazi Zombies. I was not only enthused when I first caught wind of this. And playing it through didn’t do much for me either. I could see how it would be fun, if you don’t own Gears of War 2 or Left 4 Dead… which I do. It’s very slow to start when you have three or four players, and the AI is nothing to write home about. Not to mention, there’s only one map this mode can be played on.

The other end of the game, that keeps people playing for hours on end, is the mighty online multiplayer. Built on COD4, everything is in tact. The perks system, custom setups, clans, etc. It’s all there, and judging by the Xbox Live stats, fans of COD4 are really digging it. Myself, well, I didn’t like COD4 multiplayer so much. And as such, this doesn’t really appeal to me. While I do find it to be a bit more fun than COD4, as the weapons have shorter range and less impact, it’s just not my cup of tea.

Overall, I was pleasantly surprised by World at War and have been recommending it to those who were on the fence about another Treyarch developed COD. Despite its flaws, it’s worth at least a rental for the single player campaign. And if you enjoyed the multiplayer in COD4, you’ll likely be just as stoked on World at War. 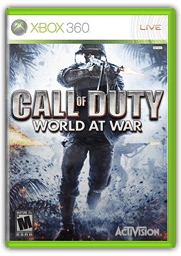 It’s fun to read your POV on this game.

I really enjoy playing the multiplayer, play it almost daily – as I did with COD4.

But I only played through the singleplayer to get the Zombie-mode.

But I thought the singleplayer looked good, but it didn’t had the big impressive moments I remember from COD4. Maybe I digg the modern weapons more? I don’t know. But I just didn’t enjoyed playing in the Pacific.

See, I had been playing Horde and Left 4 Dead a lot before trying Nazi Zombies, so it was an immediate disappointment for me. Especially the first 8 to 10 rounds. I was playing with 3 other guys and it was just so slow and boring for the first half hour or so. Nothing in comparison to the aforementioned games.

Nice review of the game. I’ve been playing COD WaW for a few weeks now and am completely addicted to the multiplayer. So much in fact, that I have yet to complete the campaign! I know i know, shame on me, but what can I say, I enjoy the competitive aspect of the online playing over everything else.

One big downfall to the game is it consumes way too much of my time I should be spending working or doing something actually productive! Other than that there’s only a few other things I would complain about. Such as getting snagged on little pieces of debris and that darn Juggernaut perk that gives the player more life.

Overall I enjoy the old school guns and maps more than most people. Everyone seems to complain its not fun because its not modern, I disagree.

I enjoy WWII era weaponry much more than modern as well, so I wasn’t overly disappointed when I heard COD would be returning to WWII.

Great review Matt. I actually just finally picked the game up, so the timing for this write up is prefect.

COD5 is a great game with great graphics. Although I didn’t get too into CoD3, and never played 4 because I hated that they broke away from their WWII roots, I’ve been with the series since the first.

Enjoyed the review, thanks.

You should pick up COD4 – it’s easily the best in the series so far. Despite being the only one that’s not set in the 1940s. The missions play out quite different as well, since you fight mostly with a small group of allies, as opposed to hundreds or thousands.

I really love the Call of Duty series. In my opinion one of the best single player games ever. It’s like you’re actually there, or at least playing a part in a movie.

Interesting fact, the next Call of Duty is going to be Call of Duty: Modern Warfare 2. Be gone WW2 remake number 84! =)

I don’t really dig the multiplayer so much though.

An up and coming multiplayer game (which is still in a closed beta) is Quake Live, based on the classic shooter Quake 3. The game will be totally free and runs in a browser. It already has me hooked like hell 🙂

After all the glitching in the COD: WAW beta I initially decided I was going to give it a miss. I ended up getting it last week and have loved every minute so far.

The single player is just there for the gamer points really and I’ll plough through it for that reason alone.

I’m looking forward to the next instalment from Infinityward, COD: MW2, although the Sci-fi setting might have put a nice twist on the franchise – shame!

And then there was me, who seems the only one to be utterly un-impressed. I’ve always said that the COD series are over-rated. Granted the SP is quite action packed but it seems highly repetitive no matter which scenario you’re in, I spoke about my COD5 dissapointment quickly after finishing the game.

I tried the MP and quickly rushed back to Battlefield Bad Company.

I am however looking forward to Modern Warfare 2 and like Matt said it was by far the best game out of the series even though being set outside of the world wars. November seems like very far away especially since Battlefield 1943 and Bad Company 2 have been announced.

Great review, even if I’m late to the game with my comment.

I think this game is great in single player (and perhaps multiplayer) but I was so disappointed with the co-op mode. I regularly game with a friend in co-op, and we discovered (after playing 6 hours one day) that it doesn’t save your progress. As far as we could figure, we’d have to beat the game in one long stretch in co-op mode. Even though we had a lot of fun while playing, this fact was so frustrating that we gave up (after one more 4 hour gaming stretch to double check).

I’m also very excited for the next installment as I agree that COD4 is the best yet. So a sequel by the same guys should be even better right? And hopefully longer…COD4 left me wanting quite a bit in the length department.

I was quite pleased when COD went back to WW2, initially I was quite worried because the weapons, maps and missions in Modern Warefare were great.

I think my favourite improvement in the Multiplayer is the bringing back of Tanks! I would have liked to have seen the jeeps etc back too from COD 3!

I’ve got so far into the Multiplayer, I haven’t even finished the single player game.

I’ve just pre-ordered Modern Warefare 2 from play.com, anyone got any ideas, rumors that we can expect in COD6?!