I’ve played all of the Halo games to date, and enjoyed every one of them. But since Halo 4 was being developed by a studio other than Bungie (and a rookie studio at that), I was pretty skeptical and decided to observe from afar. Once the reviews started rolling out and I saw that Halo 4 was earning top marks, I paid a little closer attention. When the disappointment from Assassin’s Creed III washed over me, I started to get excited for its release, and end up picking it up on day one. There hasn’t been a day gone by, that I didn’t get the urge at some point to pick up my controller and jump back into the game. Halo 4 not only exceeded my expectations, but it might actually be the best game in the franchise to date. 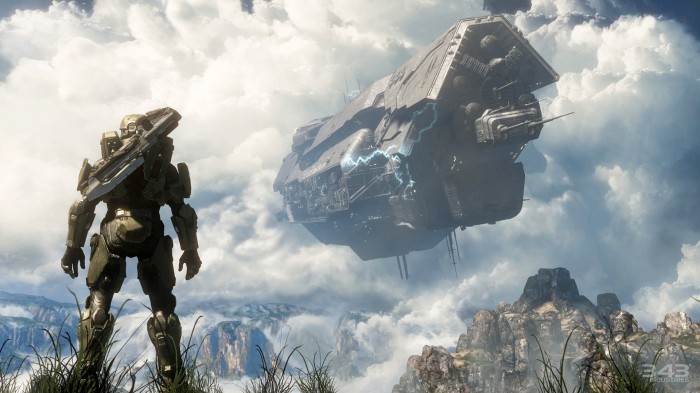 Since 343 Industries is now at the helm, everything looks, sounds, and feels a bit different, but at the same time very familiar. Master Chief and Cortana are voiced by the same actors, but that’s about it for familiar sounds. Weapons, grenade explosions, vehicle engines, jetpacks, etc., have all new sounds, and for the most part, are a nice change from the old. I was never a fan of the original sniper rifle, which kept a similar look and sound from the original game. It has been redesigned in Halo 4, and the loud crack it lets out when you squeeze the trigger is much more satisfying. Best of all, Halo 4 looks absolutely amazing! It is a definite step up in the visuals department, both with pre-rendered cinematics and in-game art work.

One thing I was curious about, was the original score. Martin O’Donnell has composed all of the previous Halo games (with the exception of Halo Wars), and the music plays such an important role, that it can often make or break a game. Thankfully, Halo 4’s composer Neil Davidge did a fantastic job! There are a hints of some of the prolific themes from previous Halo games, but most of it is entirely new and quite good. I found myself being reminded of Battlestar Galactica, Mass Effect, and the recent Metroid games, which is not a bad thing. I hope to hear some of the themes from Halo 4 carried through the next iterations of the franchise.

As expected, Halo 4 is a complete package, and one that will keep us busy for months or even years to come. The campaign, which can be played solo or co-op with up to 4 players, is the main course. It starts off with an incredible cinematic that brings the player up to speed with previous events, and sets the stage for the adventure that is about to unfold. In it, we see multiple Spartans take up arms against the Covenant threat, and Dr. Halsey (creator of the Spartans, and Cortana) being interrogated by the military. Suddenly, Master Chief is woken from chiro sleep by Cortana after drifting in space for over 4 years, and the shit quickly hits the fan. 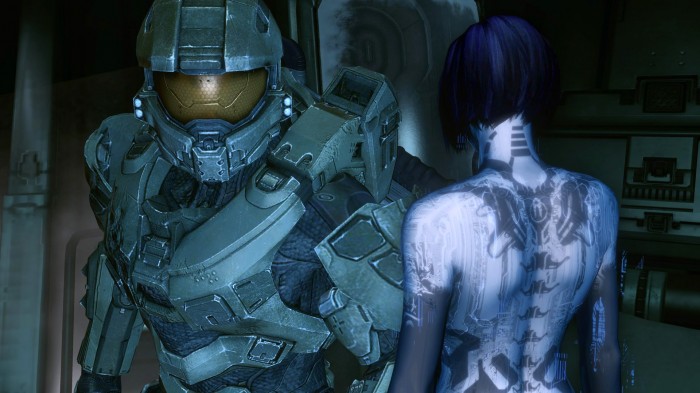 I started the campaign on Heroic, as this is the difficulty I typically play Halo games solo on, but rather quickly restarted the first chapter on normal. Ammo is extremely sparse, and with enemies dodging grenades and soaking up bullets, I ended up getting my ass handed to me over-and-over. This was the first noticeable difference between a 343i Halo game, and a Bungie Halo game. Bungie does extensive play testing, to ensure everything is well balanced and the player has the tools they require at their disposal to get the job done. The player should never have to leave a battle to go and find ammo, and I don’t recall ever having to do this in a Bungie Halo game. In Halo 4, this is a regular occurrence, and one that quickly wears on the nerves. I found that I eventually got in the habit of scavenging the area after a conflict, before moving on to the next. The ammo shortage makes UNSC weapons pretty much useless, as there are rarely weapon caches to refill ammo. There is a new alien threat, which brings a new line of weapons to the table. So instead of 2 or 3 new weapons, we have an entirely new arsenal to play with. I’m not sure if it’s because they’re shiny and new, or really are that good, but I found myself picking up these new weapons whenever they were available. 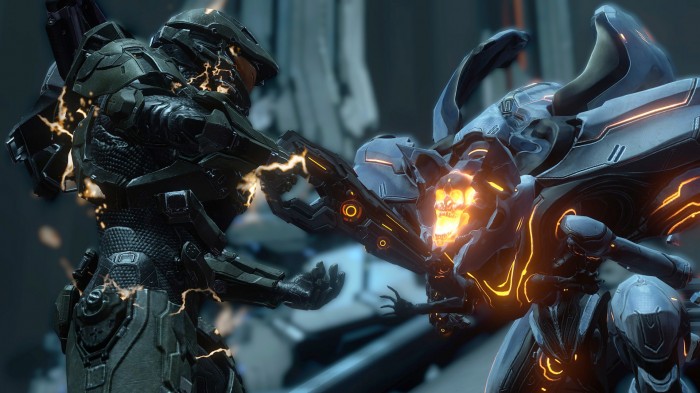 The story is much simpler than that of previous Halo games, and for the first time ever, shows a very human side of both Master Chief and Cortana. Not only them, but the military personnel they encounter as well. Master Chief has always been portrayed as a heroic killing machine, with little emotion and virtually no weaknesses. In Halo 4, we see him go through the ringer, on both emotional and physical sides. His relationship with Cortana is much more personal, and she too exhibits human behaviours and characteristics. At one point, she actually asks Chief to promise here that by the end, he figures out which one of them is human.

This brings me to Cortana herself. She’s been with us from the get-go, helping Chief unravel mysteries and find his way across the galaxy. She’s been his personal assistant in the form of an AI, and that’s been about the extent of it. In Halo 4, her role extends to that of a love interest, who shows genuine concern for the well being of the soldier who totes her around, and her fear of losing him is obviously apparent.

Also new to the Halo franchise, is the introduction of an arch-enemy. A single threat that Chief must face to ensure the safety of the human race. This threat completely out-ranks Master Chief in size, strength, knowledge, and ability. How he will be defeated is unclear until the final moments of the campaign, which left me with a feeling of despair right through until the end.

Mission types vary, which keeps things interesting as you play through the campaign. As with previous Halo games, Master Chief fights on foot, in land vehicles, and in the air. Each type of game play is very fun, and I didn’t find myself favouring one over the others, which is kind of remarkable. Each sequence seemed to be of perfect length, that when it was time to move on, I wasn’t disappointed and felt like I got my fill.

I clocked in at 6:59 during my first play through of the campaign on normal difficulty, playing solo. I definitely didn’t rush through, but playing on the harder difficulties would surely extend that time. There are a handful of mission based achievements to go after, and hidden terminals scattered through-out seven of the eight chapters. I will be replaying the campaign at least once more with my wife, on Heroic.

New to the franchise, is a co-operative mode called Spartan Ops. At first, I assumed it was simply a replacement for Firefight, but it’s much more than that. At launch, one episode of Spartan Ops was available, with 5 episodes in the chapter. A pre-rendered cinematic accompanies each episode, which drives the story. Each chapter is fairly short, taking anywhere from 5-15 minutes to complete co-operatively. Playing solo is quite difficult, even on easy. 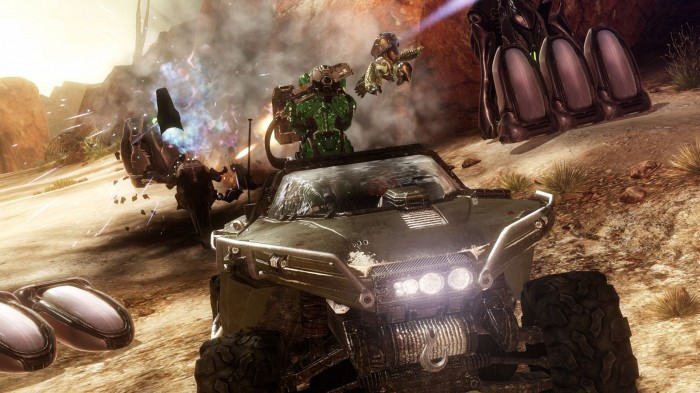 Within a week of launch, the second episode has been released, and I enjoyed it even more than the first. I feel like it goes back to Bungie’s theory of “3 minutes of fun”, where each chapter is a quick dose of battle, that is fun and satisfying from beginning to end.

It’s been said that we can expect 10 full episodes (each with 5 chapters) of Spartan Ops to be released for 10 weeks following launch. This is pretty exciting, given how much fun this new mode is to play. One thing to keep in mind though, is that there doesn’t seem to be a way to use matchmaking to find public games of previous episodes, so if you’re planning to play through them, make sure you stay on top of the new episodes as they’re released. Otherwise, you’ll have to play them locally, or via custom games with friends.

War Games is simply the competitive multiplayer mode of Halo 4. One-on-one, and team based game modes that will be familiar to veteran Halo gamers, with some new twists on traditional modes. King of the Hill has been my favourite to play so far, as its objective based game play keeps the action frantic, and the grenades flying. Flood mode, is a new take on the previous Infected mode, where 2-3 players start off “infected”, and pass on the “disease” on to others by killing them, the slain player then re-spawns as Flood. The objective is to survive and beat the clock. 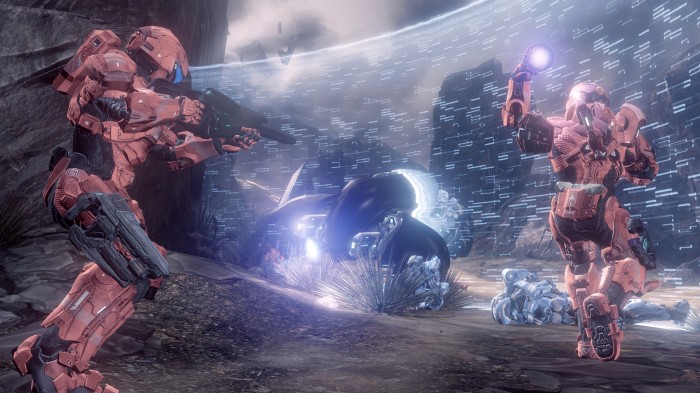 There are a few noticeable differences in the multiplayer department. First of all, there are virtually no announcements during gameplay, aside from objectives in modes like King of the Hill and Capture the Flag. Badges and commendations are still earned, but are much more subtle during the game. There is of course, the post game carnage report where you can get a good look at all of the badges you received during the match. Players are awarded ordinance drops of their choice after performing streaks. Typically, you can choose between offensive or defensive perks that are dropped instantly on the battlefield for the player to pick up. Another beneficial change, is that weapons are clearly marked on your HUD, along with their distance. This helps level the playing field, as those that have played the maps several times and know exactly where things are no longer have the advantage. At least when it comes to weapon locations.

Overall, my experience with Halo 4’s competitive multiplayer has been positive.

Similar to Halo 3, player customization options in the form of armour are unlocked by earning XP and levelling up. A single point is earned for each level you achieve while playing Spartan Ops and War Games, and points can be spent on unlocking weapons, abilities, and perks that can be used in custom load outs. Similar to other modern shooters, Halo 4 now allows the player to create custom load outs which can be used in Spartan Ops and War Games. Many of the load out options require you to reach a certain rank before you can even spend your hard earned points on them. This, along with the same type of rank and commendation requirements for unlocking armour, give the player quite a bit to strive for. Personally, I can’t wait to reach level 22, where some of the new alien weapons are unlocked.

I must say, I’m pleasantly surprised by the stellar job that 343 Industries has done with this beloved franchise. The ammo shortage is the only real damper I found on this otherwise excellent and extremely well polished package. I would not only recommend Halo 4 to long-time fans of the franchise, but for those who perhaps weren’t fond of Halo games in the past. Halo 4 is definitely still a Halo game through-and-through, but 343i’s refinements have shaped it into something a bit more magical, and a heck of a lot more enjoyable. Halo 4 really exceeded my expectations as well, 343 Industries really did a game for their life’s, my rate is 9.3 for this game.

Well done and I’ll be waiting for another great review from you.