A year after its initial release, Destiny has been majorly overhauled in what Bungie is calling Destiny Year 2. Along with this core update, came a huge content expansion titled The Taken King. It isn’t a full-blown sequel, but it very well could be. The Taken King and the Year 2 updates have reignited the fire for me, and I’m having a hard time tearing myself away from it. This review not only covers The Taken King expansion, but also the Year 2 (or Destiny 2.0) updates that have changed much of the game’s mechanics.

The actual story in The Taken King is much, much better than the original story in Destiny. It’s more interesting, involves more of the characters, and the objective is always clear. To top it off, it’s chock-full of gorgeous (and lengthy) cut-scenes and an awesome new soundtrack. 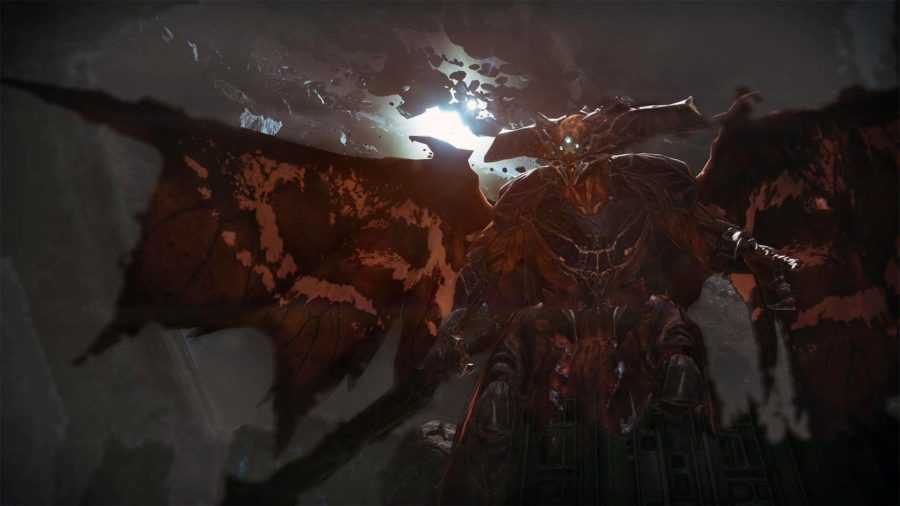 Without giving much away — The Taken King is Oryx, father of Crota. In The Dark Below (expansion 2), we faced off against Crota and defeated him. Oryx wants revenge, and has constructed an army of darkness called The Taken, which is comprised of corrupted versions of enemies from all of the alien races we’ve previously come into contact with. The kicker, is that The Taken can multiply spontaneously and teleport short distances. Taking them out (no pun intended) quickly, is the only approach, as you’ll quickly become overwhelmed otherwise.

The Taken King puts the Vanguard in leading roles, along with cameos from characters introduced in the first two expansions. Cayde-6, voiced by Nathan Fillion, is front and centre, and his personality is pretty much identical to Mal from Firefly. Needless to say, he’s quite enjoyable.

Most of the story takes place on Oryx’s ship, dubbed the Dreadnaught. It’s an absolutely massive, beast of a ship, which can be patrolled like the other planets, once you’ve completed The Taken King’s main quest line. Traversing the Dreadnaught totally reminded me of that episode of Battlestar Galactica, where Boomer lands on the Basestar and discovers it’s organic inside. The Dreadnaught feels very much alive, and is quite remarkable in its alien architecture. Vast halls with towering ceilings branch sections together. There’s a dungeon in the lower levels, a massive hull breach where the Cabal drove a ship through in order to establish a beachhead, and an arena right in the centre called the Court of Oryx — more on this later.

Unlike the main story, the events of The Taken King actually feel like they affect the entire solar system. This is probably due to the involvement of other key characters in the story, and the fact that the Taken have infected every planet you can visit. There’s a constant reminder that Oryx is out there, and he’s just getting started.

The Taken King’s story missions only take 4-6 hours to complete, but that’s not the end of it. Not by a long shot! Destiny 2.0 introduced a brand new quest system, which is like bounties, but with multiple steps. If you were to start Destiny over from the beginning, quests will lead you through the story missions, instead of trying to determine which one to do next based on difficulty level. Quests keep being handed to you continually once Oryx has been defeated. They range from class specific challenges, to visiting each of the planets and defeating the remaining Taken, to additional story levels — I was particularly surprised by this. I assume when I was done the main quest for The Taken King, that was it for story missions, but that wasn’t the case at all. They kept coming!

Perhaps one of the most exciting additions to Destiny in The Taken King, are the new subclasses. Most players who stuck with Destiny through year 1, would have completed both subclasses for their guardian(s). After completing the first mission in The Taken King, a quest opens up from your Vanguard contact, and you’re granted a third subclass.

These new subclasses unleash devastating super attacks, which completely change the dynamic of each of the main classes. For example, Titans can throw flaming hammers a great distance, where as they typically had to be up close and personal previously. Warlocks are the opposite, in that they now need to get close to their enemies in order to zap them with lightning. And Hunters have a void bow, which entraps foes in a web of sorts and slows them down dramatically, so the hunter and/or his allies can go in for the kill. Experienced individually, the new supers feel overpowered. Especially in the Crucible (PvP). But then again, if everything is overpowered, nothing is. And it’s safe to say, I’ve been annihilated by all of them equally. 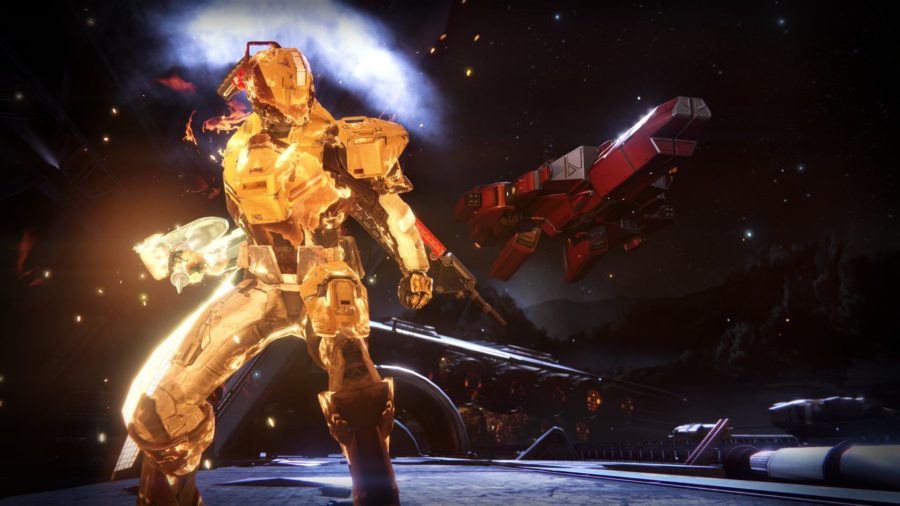 In case the story missions aren’t enough for you, there are four new strikes and a raid called King’s Fall. I’ve gone through the strikes on heroic multiple times each. They’re more technical than previous strikes, in that they involve teamwork and bosses are more than just bullet sponges. They’re not nearly as challenging or technical as boss fights in raids, but they at least have a bit more to offer than year 1 strikes. The raid on the other hand, is a beast! My first complete run-through took 2.5 hours with a fireteam of veterans who have run it several times. While the bosses were challenging, we spent more time dying repeatedly during some of the raid’s tricky platforming sequences. I’m still very much a raid noob, but I have to say, it’s been a blast playing with 5 other dudes for an extended event like this. 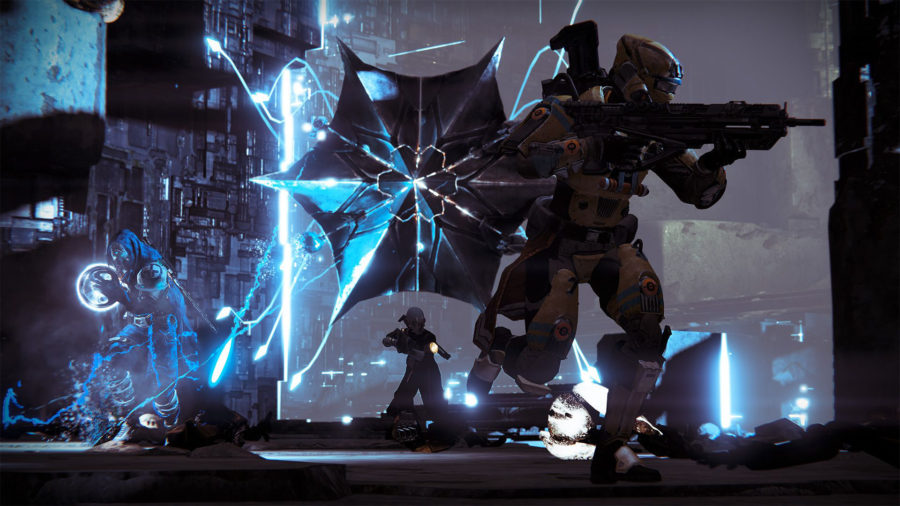 The Taken King // The Court of Oryx

Easily the quickest way to farm loot, is the Court of Oryx on the Dreadnaught. It’s an arena where guardians can use runes to initiate public events. There are three difficulty levels, each requiring a different rune. The second and third stages required charged runes, which involve you completing three of the previous level’s events. Once an even is complete, a chest opens up and drops at least 2-3 weapons, armour pieces, or engrams. The guardian who used the rune gets the chest, but it often drops one or two items for others as well.  The Court of Oryx is a blast with a few good players. I’ll often jump in there and burn 20-30 minutes farming loot.

Things in year 1 were a little wonky. Once you reached level 20, the only way to progress was to equip armour and weapons that contained light. Obtaining loot with high light levels involved grinding (playing over and over) the most challenging content; strikes and raids in hopes that you would be awarded them. There was no sure fire way to keep progressing. It was all about luck, and that’s bullshit. Thankfully, Bungie realized this, and have corrected the levelling system. In year 2, you can progress all the way to 40 by earning XP from simply playing the game however you want. Your light level is separate from your player level now, and is a combined value of your (equipped) armour and weapons. I hit a wall at 294, and wasn’t able to progress beyond that until I completed the King’s Fall raid. After one run-through, I jumped up to 297.

I already talked about the quest system, which is one of the most welcomed additions in Destiny 2.0, but bounties deserve a little praise as well. Previously, bounties would require you to replay story missions and strikes in order to defeat certain named bosses, but they’re much more vague now. 30 precision kills with a primary weapon. 30 kills with solar weapons. Melee 20 enemies without dying. Patrol specific locations; gather resources, kill enemies, complete public events, etc. That sort of thing. Crucible bounties are similar — Win a rift match. Gain control of 5 points. Achieve an individual score of 2500 in a match. All very obtainable without grinding.

One thing that was always a drag in year 1, was having to equip armour that you didn’t like simply because it had a higher light level. You were basically forced to use whatever was given to you in order to achieve the highest level. Thankfully, this has been addressed in what they call infusion. This allows you to infuse one weapon or armour piece into another. So if you have a helmet that you never want to part with, you can infuse others into it, in order to increase it’s defense. Legendary gear bought from vendors is max 280, but thanks to infusion, you can bump them up. The same goes for exotics. They typically drop at 290, but can be infused higher. The downside here though, is that infusing an exotic requires an exotic shard. And at the moment, Xûr doesn’t sell them. They can only be obtained by dismantling an exotic item.

Destiny 2.0 / The Taken King is a massive improvement over the game that was released a year prior. Bungie has been listening to its players, and has made changes in all the right places, and then some. I’m looking forward to future expansions and additional content. But in the meantime, will continue playing this game that I’ve already invested nearly 200 hours into. The other piece that TTK introduced that I think adds to the overall experience are the “hidden” bounties – Black Spindle, NTTE, etc. Like that they add an additional layer of PvE endgame content.

Absolutely! I’ve been following along on Reddit, and it’s awesome to see new things like these hidden quests being discovered. And of course, the Halloween celebrating is just awesome. Bungie is really putting a ton of love into this game.