I’ll be the first to admit, that until I actually sat down with a controller in my hands and played the Destiny alpha for PS4, I wasn’t overly stoked about Bungie’s first non-Halo title in over a decade. Simply put, the gameplay footage I had seen to date didn’t really do much for me. It looked okay, but just okay. I was definitely on the fence about Destiny, and not even considering picking it up on day one. Now, having spent a few hours with the alpha, Destiny has jumped to the top of my list of most anticipated games set for release in 2014. In a word, Destiny is impressive. 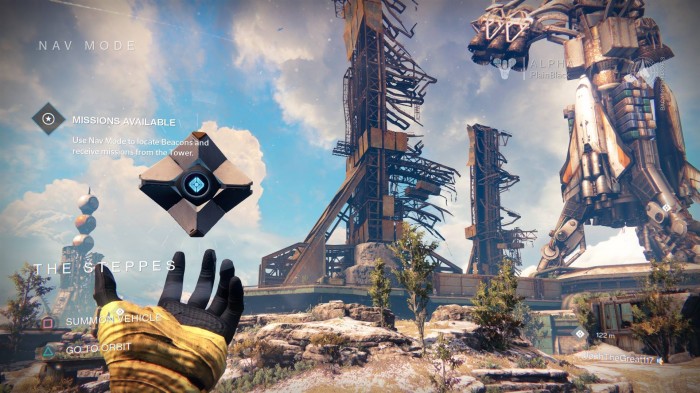 I was hesitant to try an alpha for a game that’s still a few months out. Betas can be rough, and here we are given an alpha version to try. I was expecting unfinished menus, visual glitches galore, little-to-no voice overs. I couldn’t have been further off. The Destiny alpha was extremely polished, and felt very much like a finished protect. I sat down to play it 4 times, and just once it was unable to connect to the Bungie server. That was the only hitch during my time with it.

The alpha consists of 2 major story quests, and a number of minor side-quests across a desolate Earth. The map is absolutely massive, and there is no additional loading once you get into the game. The initial load time took up to a couple minutes, but you’re given some gorgeous screens to look at during this time, so it was hardly a bother. 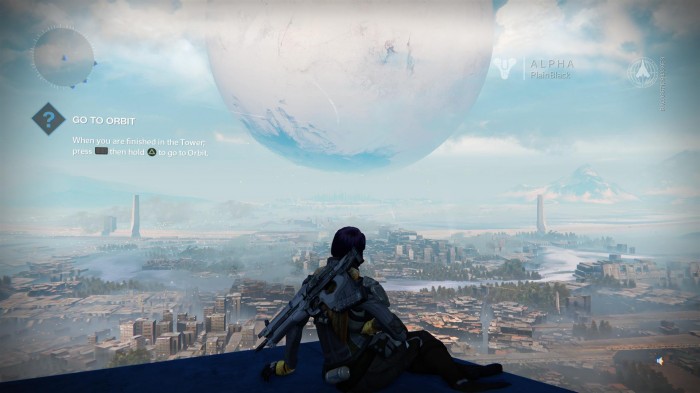 Destiny is a beautiful game, especially when it comes to the scenery. With each new area I visited, I found myself taking a moment to soak it all in. Similarly, everything to do with the sound department is top notch. The music is quite familiar, thanks to the Marty O’Donnell, composer of Bungie’s Halo games. Sound effects, especially weapons and explosions are super impressive. The first time a Devil Walker fired its main cannon at me, the room shook, and I grinned from ear-to-ear. I can already tell the voice cast is huge. I recognized most of the main voices heard in the alpha. Of course, Peter Dinklage is the voice of Ghost, the AI which you carry around. But I’m pretty certain I also heard James Remar, Lance Reddick, and Jennifer Hale.

I really didn’t know much about the game itself. By that, I mean I figured it was going to be a lot like Halo, with more of a focus on multiplayer exploration. I didn’t realize it had so many RPG and MMO aspects to it. I don’t spent a lot of time with either of those genres, so I’m actually pretty excited about branching out when the full game arrives. I think the last RPG I played was Mass Effect 3, if you can call it that. An action-RPG, I suppose. Anyway, Destiny starts you out by selecting a class and creating a character. There are 3 classes in the alpha; Titan, Hunter, and Warlock. As you would assume, they range soldier to mage, with corresponding abilities and weapons to be unlocked and expanded upon. Player level is capped at 8 for the alpha, so only the first few abilities can be unlocked for each, but it’s enough to help you decide which class you’re going to invest the most time into.

For the first half hour or so, I played solo, until I crossed paths with a couple of hunters and joined their fireteam. The game immediately became a whole lot more fun. Enemies were easier to take down, and things were moving at a quicker pace. There’s no way I could have taken down the Devil Walker on my own. Even with 2 others, it was a difficult and time consuming task. 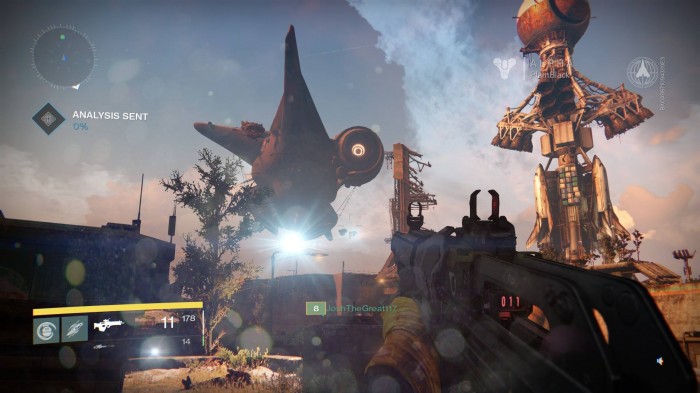 By far the coolest moment came in the form of a public event. Unfortunately, we were the only fireteam in the area, and weren’t able to achieve our goal, but how it all played out was just fantastic! As we entered a new area of the map, the sky quickly darkened and a number of dropships flew overhead, dropping bad dudes on the outskirts. Then a massive ship slowly crept in, and deployed a Devil Walker right in the middle of the area. We were given 5 minutes to destroy the Devil Walker, but unfortunately failed. When the time ran out, all of the remaining enemies in the area were teleported out in an instant and everything was eerily still. Awesome!

This alpha has given us an incredible first look at Destiny, and I think it’s safe to say that we’re in for a treat when the final game is released in a few months time.

All images used in this article were captured via PS4′s Share Button.

Always enjoy reading your video game reviews. They often match my preferences, so it’s a good measurement for me ^^

And since you (and tons of others) are so positive about Destiny and the PS4 in general, I’m going to get me a PS4 myself… soon-ish.

Good to hear, Oskar! If you end up getting a PS4 when Destiny is out, we’ll totally have to play together. It’s a blast!

Played the Destiny Beta the last few days (Xbox360) and loving it. The missions are nice, love the overall art design and the gameplay is just perfect. Feels a little like a mixture between Halo and Borderlands… but better. Can’t wait to get my PS4 and Destiny in September (PS4 before that, I hope).