Remember When Sony Told Us Tilt Controls Were the Next Big Thing?

Man, were they wrong! Or rather, their implementation of motion sensitive controls was so far from what people wanted in games. After all, despite having a massively mediocre library of games, the Wii is still selling like it’s going out of style. But Sony knew they were lame all along. They just decided to try and piss on our leg and tell us it’s raining, instead of admitting the truth – they were in the middle of a lawsuit over the DualShock’s vibration functionality and weren’t able to ship the controller with said function. Just over a year after the PlayStation 3’s release, we have in our hands, the DualShock 3. AKA, the controller that should have shipped with the PS3 to begin with.

Admittedly, there were a couple cool implementations of the SIXAXIS‘ tile functionality. Heavenly Sword being one of them. Where you had the ability to hurl objects (or bodies!), fire arrows, or launch cannon balls in slow motion, while guiding their trajectory in real time by tilting the controller. That wouldn’t have been nearly as much fun or satisfying with an analog stick. Then again, there was Lair. Arguably, one of the most anticipated exclusive titles released in the first year. It ended up averaging 56% mostly due to an absolutely awful control scheme which was entirely based on the title controls of the SIXAXIS. Thankfully, an analog stick based control scheme has been added to the game via an add-on pack. I’m likely going to pick this game up now and give it a go. Considering I can pick it up used for about $20, why not? 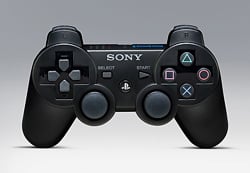 Enough talk of the crap that was. Let’s just try and pretend the SIXAXIS never happened, shall we? Sony has decided to go that route and confirmed that they’ve discontinued the SIXAXIS all together. The DualShock 3 is here, and it’s great! Yes, it rumbles, and the majority of the bigger titles are already compatible. But there are also some minor differences that make it a better controller overall. For one, it’s a lot heavier than the SIXAXIS. While you might think a super light-weight controller would be better, it’s not. The SIXAXIS is too light, which makes it feel cheap and flimsy. Another super minor detail that pleased me, is the surface no longer being translucent. For whatever reason, you can partially see through the SIXAXIS, which cheapened its presentation even further in my eyes.

I’ve been reading a lot of complaints over the price of the DualShock 3 ($54.99), which is kind of surprising. It’s only $5 more than the SIXAXIS was listed at, and it’s still the best value of the current gen consoles. Xbox 360’s wireless controller is $49.99, and the combined Wii Remote and Nunchuk are $50. But wait, that’s $5 less than the DualShock 3. Yes, yes it is. But the DualShock 3 doesn’t require any additional batteries or battery packs to power it. You plug it into the PS3 via a USB cable and it charges. So while you pay $5 more up front, you save in the long run by not having to pay for batteries for the lifespan of the console, or battery packs and charging cables/stations.

Ratchet and Clank Future wouldn’t have been good without its neat, tilt-sensitive mini-games–brilliantly executed! There were only a few to keep annoyance at bay, but I really enjoyed the challenges.

I actually quite like the SIXAXIS. I always turn off Vibrate, so the DS’s rumble didn’t matter to me.

One thing that I’d like to know: does the DS3 turn itself off? I always leave the SIXAXIS on. The Wii remotes turn off after 5 minutes, or so. But the SIXAXIS will burn your battery up all day if you let it.

Now, are you going to bite the bullet and get GT5: Prologue, or wait for GT5?

True enough about Ratchet and Clank. I just recently played it, but forgot about those door override puzzles, etc. They were pretty fun.

I’m almost positive that auto shut-off was added to the controllers via software update a few versions back.

No, probably not going to get GT5: Prologue. I’ve never been a fan of the GT series, and have little to no interest in investing time and money into a half finished game.

I just checked for a setting and I had to find a USB cable to charge it–oh! the irony.

I cannot see one. I have the 40gig which is deliberately crippled. Perhaps this type of functionality was omitted as well?

I’ll probably get a DS3. Maybe it doesn’t have this stupid problem… maybe…

Just wanted to say that I have the 40GB PS3 and my PS3 controllers turns themselves off shortly after I turn off the PS3, and normally after about 5 mins if I leave the PS3 on.

Wait, wait. You’re telling me Sony shipped a controller made of see-thru plastic? In 2008?? Heh. Seriously, though, while I think the 360 pad is the pinnacle of traditional gamepad design, I HATE the D-pad, especially for Street Fighter. I’m actually one of those weirdos who thinks the dualshock has a fantastic d-pad for 2d games, especially fighters.

I want Street Fighter HD Remix, but I don’t ant to play it on the salad plate of a d-pad on the 360 controller.

Well, the SIXAXIS was shipped with the PS3 back in 2006, but still lame.

Agreed on the d-pad on the 360 controller. It’s pretty frustrating at times. The PS3 definitely has it beat there, but I hate it being the primary focus of the controller. I rarely use it.

The N64 controller? That thing was an abomination!

I do have to agree, while motion-sensing controls are cool in theory (the Wii), they fail when the player has to exit normal game play and do some weird combo or action that looks entirely ridiculous and tiring.

While the Wii controller is nice, it is the ONLY thing going for it. With shovel-ware, poor online, and SD graphics, peple seem to only want the Wii for Wii Sport.

And since I don’t want to be biased, I will hate on the Xbox 360 controller. While I do believe they fully made a quality squeal to the original Xbox controller, there is still one major fault. The damn D-Pad. Unless you go distinctly in one direction, the entire pad is useless.

Sorry, there is no edit button:

Lol, I added some rant tags (__) and they got deleted.

[…] Matt Brett on DualShock 3- An interesting read, and another perspective on the implementation of vibration in consoles.Ãƒâ€šÃ‚Â  As this is an aside I won’t go into too much detail but as for the Wii selling like hot cakes; it’s not aimed at a gamer like me.Ãƒâ€šÃ‚Â  If a console has to sacrifice graphics and depth to that extent in order to appeal to a wider (non-gaming?) audience, then count me out. […]

They just feel old, and inefficient when it comes to modern gaming. I understand a lot of that has to do with the amount I play the 360 over the PS, but regardless I think drastic improvements are needed for the next release.