After a lengthy delay, Ubisoft’s highly anticipated Watch Dogs is finally in our hands. This is a game I had been looking forward to for a couple of years, and initially had it pre-ordered as a PS4 launch title. Sadly, Watch Dogs didn’t live up to my expectations, and not for the reasons you might expect. The features that set it apart from other third-person open world games are pretty neat, and really do make it feel unique. The biggest let downs for me, were the main character himself, a good chunk of the story missions, and the incredibly stupid AI. 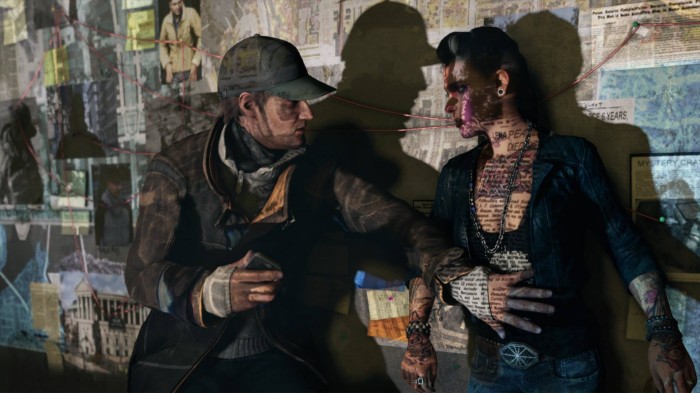 In a nutshell, Watch Dogs is Assassin’s Creed in modern day Chicago. You play as a generic grovely voiced white dude with a 5 o’clock shadow, who won’t rest until he sees his mission through to the end. No matter the cost to himself or those around him. In all honesty, Aiden Pearce is a total piece of shit, and I was fully hoping to see him lying in a pool of his own blood when the credits rolled. The story is setup fairly quickly, and we learn that Aiden is a thief who crossed the wrong people, who inevitably exacted revenge on him, but his niece was caught in the crossfire. Aiden will rest at nothing to avenge his fallen niece, even if it means putting his sister and nephew in harm’s way, and countless civilians and police officers are killed along the way. By the time I had finished the story, I had killed dozens of cops, and yet Aiden is still walking around Chicago like he owns the place.

What’s super weird to me, is that I found it upsetting that this dude was on a killing spree in the name of his dead niece. I’ve played this type of game countless times, and it never really got to me. In Grand Theft Auto you play as criminals each and every time, and I fully enjoy it. Maybe that’s the difference here? Aiden Pearce is supposed to be a good guy, but his action prove otherwise. He’s a murdering thief, and I really couldn’t have cared less if he lived or died, because I felt like I was supposed to feel sorry for him, and that his action were somehow justified by the death of his niece. Instead, it pissed me of and made me hate him. Watch Dogs would have been a far better game if there were no guns, and no killing, period. If it was all about hacking, using environmental traps, and non-lethal takedowns, I bet it would have been a much more enjoyable game, and a more believable story.

In an attempt to offset all of the terrible things Aiden has done, Watch Dogs throws some morale decisions at you. Unfortunately, they pretty much fail entirely. For instance, while you’re roaming the streets of Chicago, you’re often given the opportunity to perform good deeds, like stopping a pick-pocket who’s making off with a woman’s purse. You can turn a blind eye, or chase the thief down. If you decide to chase the thief down and are successful in catching him, you keep the woman’s money for yourself. There’s not even an option to return it. Then there are thieves with guns, who will shoot wildly as you pursue them. Civilians scatter, and will often call the police when someone starts shooting, or even pulls out a gun. Regardless if you pull out a gun or not, you end up being the one the police are after when they arrive at the scene. So, why bother? Why bother chasing a dude down to retrieve a stolen purse when you’re just going to keep the money for yourself? Why bother stopping an gunman from killing innocent civilians when you’re going to take the blame for his actions? Pointless. 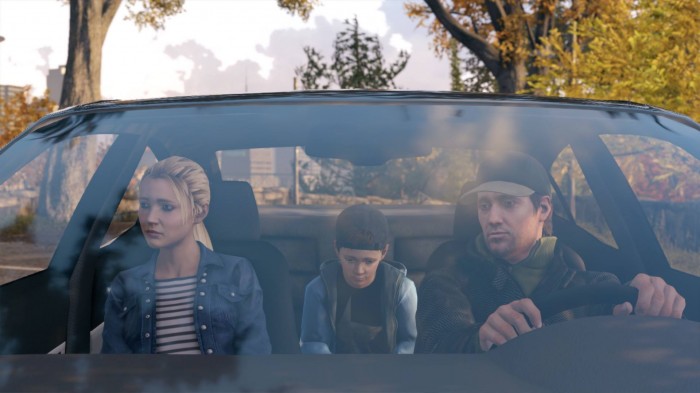 I played Watch Dogs on the PS4, and it didn’t blow me away in any regard. It looked good, but not great. Sound effects, especially vehicle sounds, were quite poor. Normally I would turn the volume up when I got in a high end sports car to hear the purr of the engine, but I found myself turning it down while playing Watch Dogs. I totally couldn’t stand the lead character’s voice; dude, clear your throat already! And one of the other main characters had a particularly annoying accent. When you jump in a vehicle or while you’re walking around, you can listen to a pretty wide selection of music, but there are no radio stations or anything. Just one big playlist featuring everything from 70s funk to Rise Against. Needless to say, I found myself hitting the “next track” button quite often. There are a couple gems in there, though. 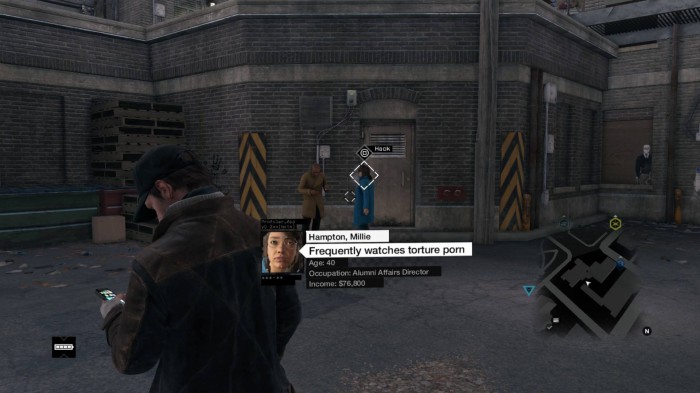 Hacking. The one thing that makes Watch Dogs stand apart from the crowd. It’s neat. You can pull out your phone at any point and “profile” anyone and everyone. As you highlight people, you see a brief overview of their traits and habits. In some cases, you can tap into their bank accounts and steal money. With others, you can eavesdrop on phone calls and text message conversations that will often lead to side missions, such as potential crimes or gang hideouts. But the real fun occurs during missions, when you use security cameras and computers to hack your way through multiple floors of secured buildings, without stepping foot inside. It’s pretty gratifying when you’re able to complete an objective without being detected, and without killing anyone. Which leads me back to something I said previously; Watch Dogs would have been a much better game if they focused entirely on hacking and non-lethal methods of eliminating enemies.

The real star of Watch Dogs is the city of Chicago. I think it’s safe to say, it’s the most lively, realistic feeling virtual city I’ve experienced to date. It really is quite impressive. From the sheer size, to the amount of vehicles and civilians roaming the streets, to the seemingly endless amount of side quests and activities. There are even “hotspots”, where you can check-in, just like Foursquare. Each hotspot even has a mayor, who has visited most in the given week. At first I thought it was silly to have this sort of thing in a game, but when I came across some of the historical locations, my interest was piqued and I found myself seeking out other historical buildings throughout the city.

Two of Watch Dogs’ online modes are directly connected to the single player experience, which only makes sense in a game like this. While you’re playing, you get notifications that an online contract is available. Accepting the contract throws you into a cat-and-mouse type of game mode, where you are either hacking or tailing an opponent. Of course, it works both ways, and you may end up being notified that you’re being hacked and given a time limit to find and eliminate your pursuer. While this is kind of neat, I found it to be more of a distraction from the main story than anything else, and I disabled the online modes after a few hours of play time. There are also some traditional online modes, like races and a capture the flag type mode called Decryption. 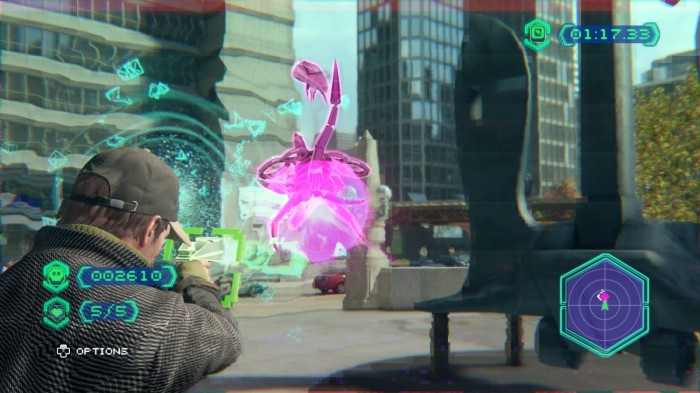 Totally out of left field, are the AR (augmented reality) games and Digital Trips. These are solo games that are straight up wacky. One of the Digital Trips is a zombie driver game, while another has you bouncing on giant flowers, and even stranger still, there’s Spider Tank. Cash Run, one of the AR games, has you chasing after oversized pixellated coins through an obstacle course of sorts. Straight up weird stuff. Given the amount of rough edges this game has, I would have rather seen them smoothed out, than had these silly mini games.

In the end, I can’t say I really enjoyed my time with Watch Dogs. If I had rented it, I probably would have returned it without completing the story. At the 3/4 mark, I was simply going through the motions so I could be done with it and move on to the next game. I didn’t find the story compelling. I straight up didn’t like the protagonist. And the game play, with the exception of the hacking features, felt very generic, and even subpar. If you’re huge into open world games and aren’t sick of the Assassin’s Creed formula, you may have more fun with Watch Dogs than I did. If you’re on the fence about it, wait until the price drops.

All images used in this article were captured via PS4′s Share Button.