It’s been nearly 8 months since Star Wars Battlefront was released, so why am I just writing about it now? Well, it’s been 9 months since I’ve published anything at all, so I missed the boat on a pile of games I played in that time. But more importantly, I’ve been playing Battlefront quite a bit lately, since the Bespin DLC was released, and I find myself wanting to talk about it. So here we are, with a severely overdue Star Wars Battlefront review, but I’m going to touch on the DLC that’s been released to date as well.

What is Star Wars Battlefront?

Star Wars Battlefront is a large scale multiplayer shooter set in the Star Wars universe, that focuses on the most beloved era — the original trilogy, episodes IV – VI. While it does have some single player modes, they’re basically a primer for the many multiplayer modes, or for the odd time you find yourself without an internet connection. It’s not a super deep game, in terms of character progression, but what it lacks in depth it makes up for in action and straight-up fun. It’s a game I find myself playing in short bursts, and not for more than a few days in a row. But every time I sit down to play Battlefront, I have a blast. Battlefront is a bit of a strange game, in that it doesn’t matter how good you become at it… you’re still going to die, probably a lot. It’s not like Call of Duty or Battlefield, where you see people sitting at the top of the leaderboard at the end of a round with 40+ kills and less than 5 deaths. That simply doesn’t happen here. Which, if you think of the films, makes a lot of sense. Stormtroopers aren’t exactly resilient to blaster fire. They go down with a single hit, or a single swipe from a Lightsaber.

Battlefront does come with quite a few game modes out of the box; 9 at launch, and they range from 8 to 40 players. The latter being the beloved Walker Assault, where a pair of Imperial AT-AT Walkers make their way to destroy a rebel base or ship. The Rebels must activate uplinks to call in Y-Wing bombers, while the Imperials try and prevent them from doing so. Walker Assault features ground combat, vehicular combat, and aerial dog-fights. It’s the flagship mode in Battlefront, and for good reason. The maps are huge, the combat is intense, and it truly feels like a massive Star Wars battle. There’s shit going down in every direction you look.

The bigger game modes are the ones I prefer; Walker Assault and Supremacy are typically what I got for. But Fighter Squadron is probably my favourite overall. My only complaint being that the rounds are too short. It’s X-Wings vs Tie Fighters, and it’s glorious! 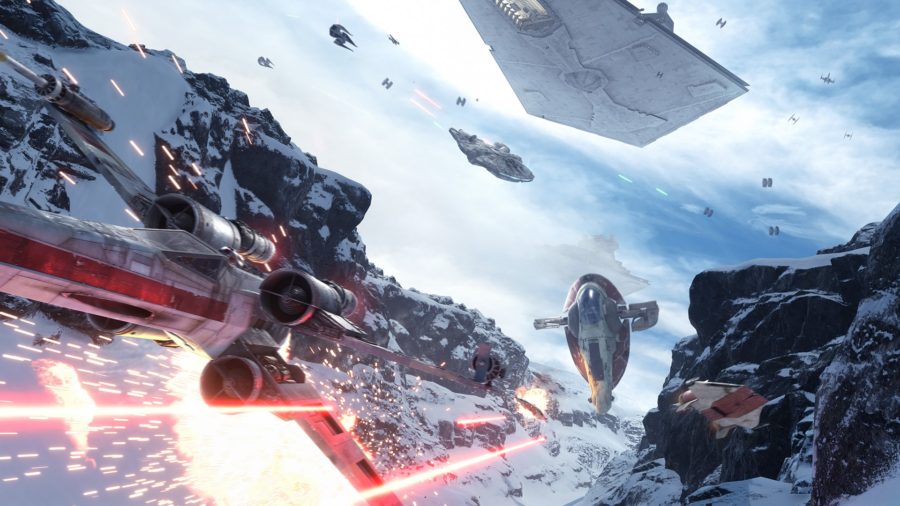 In most game modes, there are hero pick-ups, where a player can assume the role of the franchise’s most beloved heroes or villains. From Luke Skywalker and Han Solo, to Darth Vader and The Emperor, most of them are present and playable. Even in Fighter Squadron, you can pilot the Millennium Falcon or Boba Fett’s Slave I.

Battlefront looks and sounds fantastic. Every pixel is carefully crafted, and the sound effects are second to none. Star Wars fans will have their expectations set high going into this, and they won’t be disappointed. In fact, I’d go as far as to say that Star Wars Battlefront is the best sounding game I’ve ever played. It’s just incredible.

Since its release back in November, we’ve seen 1 minor, and 2 major DLC releases. 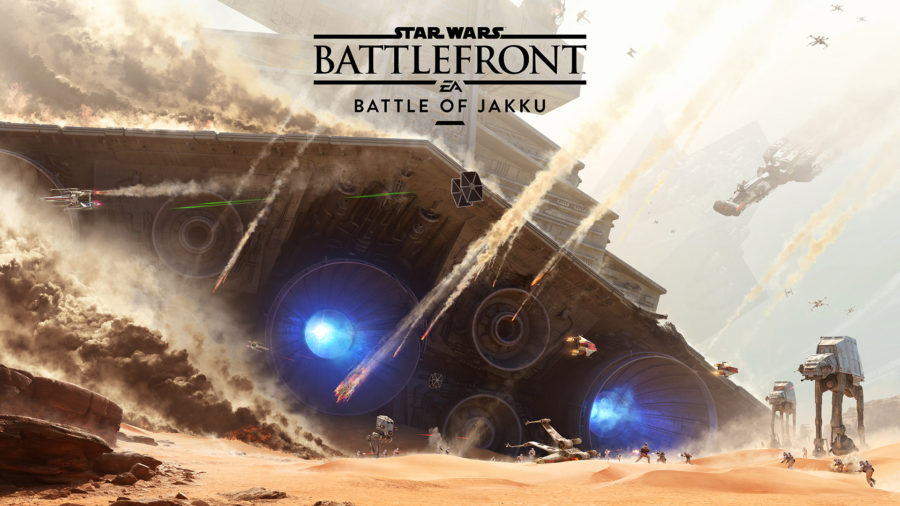 The first batch of DLC was Battle of Jakku. While this was a small (and also free) release, it included a new game mode called Turning Point, and a map featuring the war torn desert planet Jakku, which you should recognize from The Force Awakens. The difference in this version of Jakku being that it takes place during the battle, shortly after the events of Return of the Jedi. Turning Point is one of the more intense modes, as there’s a timer counting down the entire time. The goal is for the rebels to push back Imperial forces and eventually capture their base. To do this, they must capture control points, and continually push the front line back until the stronghold has been reached. 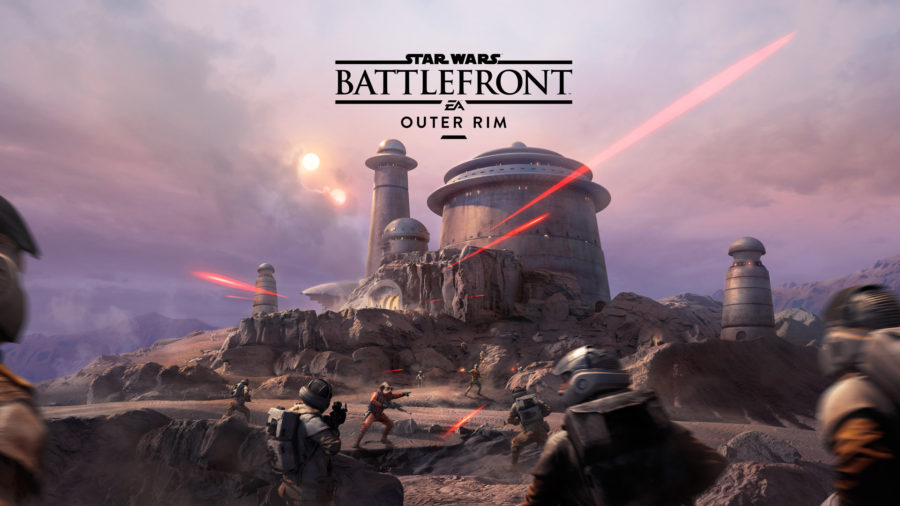 Next up is the Outer Rim DLC, featuring 2 new maps, 2 new heroes, a handful of new star cards, and a new game mode called Extraction. Extraction is pretty fun, as it keeps the action focused on a shipment that is slowly making its way from one end of the map to the other. One of the coolest part of the Outer Rim DLC is running around in Jabba’s palace, and coming across his sail barge in the garage.

Outer Rim also brought Jabba the Hutt into Battlefront. Hutt Contracts can be purchased for credits, and completed for weapons and power-ups. They require you complete goals, like achieve kill streaks with certain weapons, using specific star cards, gaining experience points for completing objectives, etc. This added an extra layer to Battlefront, which makes you think more about your loadout, or how you’re playing in order to complete contracts. 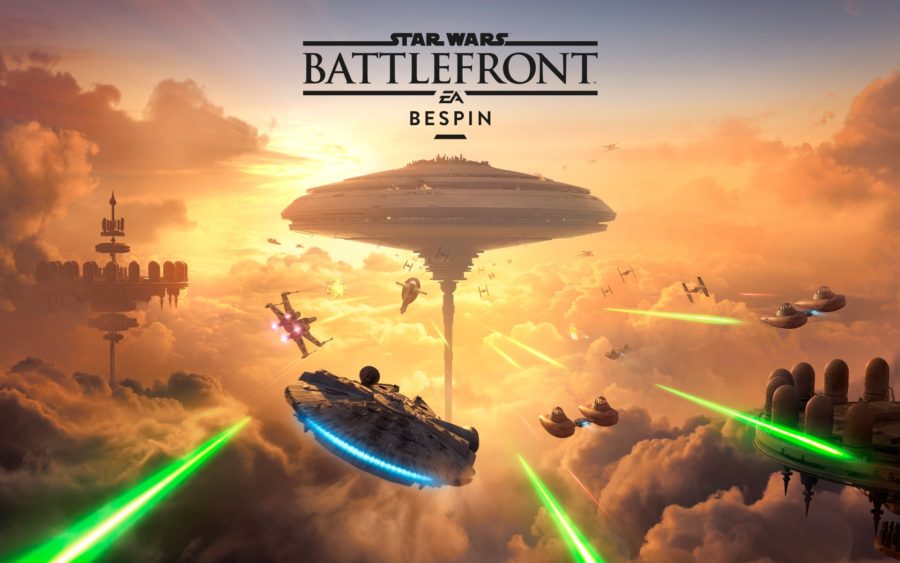 Most recently, we’ve been hit with the Bespin DLC, and it, is, awesome! Bespin comes packed with 5 new maps set in an absolutely beautifully recreation of Cloud City, an extremely action packed new game mode called Sabotage (which is by far my favourite mode to play), a handful of new weapons, additional star cards, and you can now play as Lando!

More than anything, I’m blown away at the details put into the Bespin maps. From the gorgeous skyline, to the eerie carbon freezing chambers, to the gorgeous architecture. A lot of love has gone into these maps, and I for one, appreciate that effort.

At this point, we’re half-way through the DLC cycle. The next batch will feature the Death Star, which is slated for Fall 2016. The final piece, which is yet to be announced, is set for Winter 2016. I have a feeling it’s going to tie into Rogue One, which hits theatres on December 16th.

Is it worth buying?

If you’re a Star Wars fan and enjoy first (or third) person shooters, then yes, absolutely. Consider Battlefront to be more of a casual experience, and something to jump in-and-out of, and you won’t be disappointed.