Microsoft made a some big waves today by releasing the first public beta of Internet Explorer 7. Unlike the previous beta, which was closed to developers. This one features many crucial fixes as far as how it renders pages. Tons of the most notorious CSS bugs have been squashed and some other nice-to-have features been added. Transparent PNG support made it into the first beta, so there’s 2 huge things right there that should make all web designers rejoice. Now [Microsoft], finish this shit up and roll it out to the masses, stat! 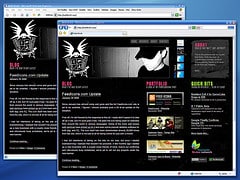 Being a designer and a Windows user, I was obviously anxious to see how IE 7 was coming along. I installed it right away and no surprise, it replaced IE 6. Probably not a big deal for the average user, but I still need IE 6 for testing purposes. I remembered having older versions of IE 5 and 5.5 back in the day and after a quick search made my way back to evolt.org – Browser Archive. Low and behold, in the standalone IE directory, there’s a version of IE 6. I quickly downloaded it, fired it up and sure enough, it works!

Problem solved. Now when I must use IE for things like Windows updates or those [other] ridiculous sites that force you to use the handicapped browser that is Internet Explorer – I can use IE 7 without enduring too much pain.

One down-side though. Firefox plugins such as IE View and IE Tab use IE 7. That’s kind of a bummer since I use them pretty frequently. But I can always toss up a Quick Launch icon or map to one of my many, un-used keyboard shortcut buttons. I think that’s a sacrifice I’m willing to make.

I’m not particularly impressed with 7. It is slimmed down and greatly streamlined, with much better css support, and yet despite this, it still manages to feel, well, chunky.

You’re one of the lucky ones, it seems.

IE7 Beta 2 appears to support the :hover psuedo-class on block level elements. I haven’t done any more testing beyond that.

Otherwise though seems fairly solid, some things are still sketchy, and visually I think IE7 has skitzophrenia going on or something. The GUI, IMHO, is garbage.

Looks like illegitemate child of Flock, Firefox and a bit of Opera thrown in…

Although there is an option to view all your Tabs at one as thumbnails…kinda cool. I don’t know how useful it will be i nthe long run though.

I have Windows Vista Beta, so this is not new to me. But I have to admitt that I do love IE7. This coming from a hardcore Firefox supporter.

And it is about time Windows added tabbed browsing.

Thanks for that link. I, also, downloaded the beta version and it wiped out my old.

I installed the browser yesterday and as a Firefox Hardcorefan, I can say the browser is really nice, IE 7 is understanding better CSS and supporting 24bit alpha .PNG. Now you don’t have to code your site for IE 6 and FF, cause IE7 has nearly the same CSS "Knowledge" as FF 1.5, that makes Blogdesigning alot easier :).

@Gizmo: Wouldn’t it be nice if that were indeed a fact? I was extremely distraught when I discovered yesterday that a new site I had just finished that appears perfect in every browser, except IE 7. It seems my method of clearing a double float by floating its container (as learned in Bulletproof Web Design) doesn’t work in IE 7. Check out that site in IE 7 and see how the bottom section overlaps the top. That’s just fuckin’ awesome! Now we have to make exceptions for IE 6 and IE 7.

What will it take for them to just give up or give in?

Ya, I’d have to agree so far IE7 is still having problems with CSS, sites I have created that work fine in every browser I tested stills break in IE7.

Yes IE7 is an improvements over IE6, is it a standards compliant browser yet? no.

And realistically, as soon as IE7 is final, people are necessarily going to be switching to it immediately, nor will people be moving to Vista any time soon. Some of us still try to take IE5 into consideration, we will still have to design with IE6 in mind

But maybe, just maybe there is light at the end of the tunnel.

Ahh yes you are right Matt B. The IE 7 has some css problems I noticed today in the agency when I coded an clientwork and tested it, thats a bit sad I think. I didnt tested the browser alot but there are still some differences to FF 1.5.

When I installed beta2, it ran as a seperate app from windows explorer, and before I changed my default browser actually launched sites entered in the address bar in firefox…

Did a search for running IE6 and 7 together and came across this site. It is awesome Matt. Well done!

Had a few problems with IE7 myself, particularly the list items of an unordered llist having about 30px gaps between them!

Looking for simultaneous IE 6 and 7 installs. Nice work Matt. Hardcore Firefox fan but it is crashing now and then. Lets try IE 7.

Hey Matt! Just checking in your archives. I’ve been styling with CSS and test it on two major leading browsers that is IE and MOZ. Many designers day that MOZ is better in many ways but it’s easier to style with the new IE7. Specially for a fresh beginner (I’m advanced).

What an awesome discovery, this makes my life oh-so-much easier!