March 30th was a sad day for the Fat Wreck Chords family as we learned about the passing of Derrick Plourde. Derrick played drums on the very first Fat release, Duh, and we consider him one of the founders of the label as well as a great friend. His profound talents can be heard on all of the early Lagwagon albums and also on recordings from Mad Caddies, The Ataris, and Bad Astronaut. Above all, Derrick was a great guy who will be sorely missed and will always remain a member of the Fat family.

Fuck. Next to Derek Grant (of Alkaline Trio and The Suicide Machines fame), Derrick Plourde is my favourite drummer of all time and has been a huge influence on me as a musician. He’s one of the most technical drummers I’ve ever heard and still to this day, I can’t figure out how he pulled off some of the stuff he did on the first 3 Lagwagon records. Simply an incredibly talented musician. Such a shame that he’s gone.

Kris Roe posted a nice little story about some of his memories of Derrick on The Ataris’ site. Here it is in full…

Just found that our friend Derrick Plourde shot and killed himself today. He was our original drummer and was the current drummer of the band Bad Astronaut, along with our cello player Angus Cooke. and our friends Joey Cape and Marko Desantis.

I first met Derrick in 1997 after having had our demo passed along to several drummers, Derrick called me up. I immediately knew that the guy was a complete character, He definitely had a sense of humor like no one else I had ever met before, I mean seriously the guy could get away with the craziest shit, I remember the first time we played the non-for profit D.I.Y. very P.C. “Gilman ST.” in Berkeley and the first thing he said to the kid putting on the show when we showed up in the club was “Who fired the maid?!” If any of you ever went to this club you will know what I’m talking about just look in any early Crimpshrine/Green Day/Fifteen/Op Ivy… L.P. and most of those photos of that completely grafitti covered shit hole was none other than the infamous “924 Gilman ST.”

Derrick would litterally walk up to any random person and be like “Hey are you gonna eat that?” and then fully smack the entire plate of food from their unsuspecting hands, where I came from if you tried any of this shit it would mean a serious ass kicking but somehow this charasmatic, young, individual managed to get away with it all, I could never do him justice, I would reccomend for any of you to go pick up the first Bad Astronaut E.P. entitled “Acrophobe” at the very end of the c.d. there’s around 20 minutes worth of answering machine messages that he repeatedly left on his friend Jeff’s machine just over the period of a couple days, over and over again…

I mean serioulsly this guy was warped, you probably won’t understand alot of the inside jokes but it is funny none the less. (Note: it is only on earlier pressings of the C.D. as it was later removed… to us it was just typical Derrick in his usual form.) In late 1997 after recording our first L.P. Derrick came to Indiana for a few months to live and rehearse with Jasin and I where we all slept on the floor of a 12 x 12 apartment with no heat next to the drum set. Those were great times. Derrick, I am sure that Jasin would also want me to extend his best regards as well on his behalf so I shall do that.

Three months later I moved to Santa Barbara with Derrick, it was through Derrick that I was introduced to Mark Desantis who would soon thereafter become our first bassist and one of my closest friends. One of my fondest memories of Derrick, Marko and I together would have to be a night on our first tour ever. We were in Modesto, CA and Derrick dissapeared, got drunk, completely naked and was later seen walking around the halls of the hotel with a towel wrapped around his head talking in strange foreign tongues… Still makes me smile. Derrick taught me many colorful new words of a foreign language called “Goletian” not known to anyone outside the circle of Goleta, Smile

I would like to extend my love and respect to all of Derrick’s many friends and family, Joanne, Joey, Jessica, Snodgrass, Derrick’s Brother and Father, pretty much everyone in every band in Santa Barbara, just anyone who loved and cared about this guy as much as I did. This is one of those things in the back of your mind you kinda somewhat think could happen anytime then suddenly on the day you get that call it just doesn’t really seem real. We defintely take some things… some friendships for granted while we are alive, and then suddenly they’re gone. Derrick, I can assure you that tonight in Santa Barbara, Goleta and the rest of the world there are many glasses raised in your honor, Be well and we all love you always.

Make sure that when you see Keith Moon and John Bonham up there that you give them plenty of shit and make them laugh like no one else could do… Party.”

Listening to the Duh album as I type this and Bury The Hatchet just came on. God dammit… so good. Gone. 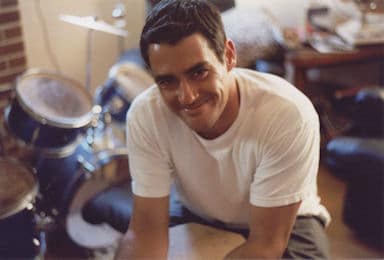 Damn. First (and best) punk drummer I ever heard. This is a shock.

the only word that comes to mind is: sad. suicide is horrible.hope his pain is gone.now.love.

I always said he was the best drummer lagwagon ever had, even hearing "beer goggles" and "mr. cofee" back then on the first album made me say he was great. I feel really sorry for all his family and friends.

His music was intelligent, innovative and creative delivering a perfect clean sound for the drums that this kind of music needed to reach its finest musical level.

His music will stay in my records, RIP…

I got no words to say anything, the only thing i can say is "thanks".

See you next time.

Derrick’s musical potential was devastating.simply one of the best drummer i’ve ever hearded.he doesn’t only follow the beat , he make the drum up front the song.bad astronaut’s last album was recorded with drum tape that derrick recorded before he past away and his friend joey finish the songs into he touching tribute to his dear friends.respect to his friends and familly…..from a lovng fan