Returning to the Pacific in Battlefield 1943

It’s been nearly 7 years since the release of Battlefield 1942, but I often find myself looking back on the countless hours I spent playing that game with fond memories. It was not only a blast to play, but also quite influential in that it paved the way for many online conquest style games to follow. Needless to say, I was just a little excited when I caught wind of Battlefield 1943 – a pseudo remake of this classic game. Now it’s here, in our hands, and it’s bloody brilliant!

It’s hard to call Battlefield 1943 a stripped-down version of the original game, but I guess technically it is. There are only 3 maps (while a forth map, Coral Sea will be unlocked once a community goal of 43,000 kills is reached) and 3 classes. But what it’s lacking in content, it more than makes up for in gameplay.

Battlefield: Bad Company was one of last year’s great shooters. With destructible environments, a fun single player campaign, and awesome online play, it had a lot to offer. BF1943 borrows heavily from Bad Company and brings much of the awesomeness to the Pacific theater.

A single click from the main menu will land you in a game. Since there’s only one game type, there’s no need for a custom game option. But there a couple quick ways to bring your friends along with you. I love the “Invite Xbox Live Party”, which sends an invite to everyone you’re currently partied up with, instead of having to send them all manually yourself. Once you’re in a game, you pick one of the 3 main classes and the game will select the most appropriate spawn point for you, or you can choose yourself. Either way, it’s not long before your dodging bullets and debris.

One thing I loved about Bad Company was the award/badge system. Achievements are great, but you can only earn an Achievement once. The awards in BF1943 can be earned over-and-over-again. Just like in Bad Company, the award will fall from the top of the screen with the title and a nice little musical ditty when acquired. It’s quite satisfying!

The action in BF1943 is frantic, constant, and unforgettable! I don’t recall BF1942 being so intense and incredible to witness and be a part of. I had so many “moments” while playing last night, that I didn’t know where to start when telling my wife what an awesome time I had. This is one game that warrants a spectator mode, but sadly doesn’t support one.

As you would expect from a Battlefield game, the vehicles are in tact. Flying an airplane is just as tricky as it was in BF1942, but that makes it so much more rewarding when you successfully dive-bomb a moving tank, or avoid being shot down during an intense dogfight. 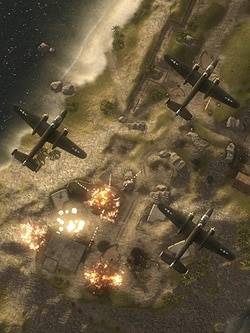 There’s a new gameplay mechanic that’s been added to BF1943 that adds a level of panic and excitement like no other – air raids. There’s one air raid tower on each map, and only the team that controls the flag it’s near can make use of it. When you call an air strike, you switch to a chase camera behind 3 bombers slowly approaching the island. You can guide them to the spot you want to hit, then switch the camera mode so you’re looking straight down from the belly of the lead bomber, and pull the trigger to unleash hell. When someone has summoned an air raid, sirens go off across the island, so you know to look to the horizon for the in-coming bombers. I actually find myself getting excited when I see red, which means they’re enemy bombers, and quickly scramble to the nearest AA flak cannon or head in their direction to intercept if I’m in a plane. So. Much. Fun!

Just as BF1942 did for WWII themed and conquest games back in the day, BF1943 has set a new standard for downloadable games. It’s not massive and feature rich, but it’s definitely carefully constructed and perfectly executed for the platform. It delivers undeniable fun at a low cost, and is a game I see myself playing for many months to come. 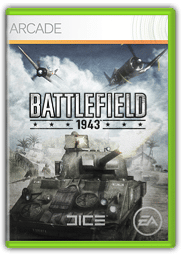 Looks awesome, wish I had an XBOX 360. I’ve only played BF2 for PC, but seeing Wake Island in the first screenshot had me recalling fond memories.

If you still have a gaming PC, it’ll be release for PC in September. In the mean time, it’s out on XBLA and PSN.

I couldn’t agree more. That game is perfectly balanced with enough content to keep me coming back for more.

I was actually surprised how well are all the maps designed. All the flags can be captured at any time, even when heavily fortified by enemy.

Well played by EA and I keep my fingers crossed for more maps via DLC! 😀

It sure is a lot of fun, for such a small package – 3 of everything, as you mentioned.

I’m hoping that the success of BF1943 warrants some DLC in the form of additional maps. There were 3 expansion packs for BF1942, so plenty to choose from. Hell, I think this warrants an entire remake of BF1942!

As you know I’m a HUGE fan of Bad Company and have played it till my eyes swelled. Knowing that BF1943 was coming out was like anticipating Transformers 2, it was excitement overload all over again!

I’ve only played it once mind, the night it came out and the servers were having various issues. I’ll be putting more time in tomorrow and can’t wait.

So now to put many an hour into BF1943 and look forward to Bad Company 2.

Hoorah for EA keeping it the way it should be!

I was pretty damn excited about this game, too! More so than most of the big titles that are headed our way this holiday. Probably because I have such fond memories of BF1942 and still love that sort of gameplay.

Yeah, now I’ve played more of the game it’s so much like BF1942! It’s amazing how you don’t really get bored of the three maps because they’re so action packed. I’ve managed to nail down the controls for flying already as I played so much BF2 in the pilot role.

The game is seriously all kinds of awesome!

Never played 1942 and my copy of Bad Company is still on the shelf sealed, but after all the hooplah about this game’s release, I decided to give it a shot and grab it. So addicting, and the way one game just rolls into another doesn’t help things either. Now if only I could stop crashing my plane into the ground… 🙂

Definitely spend some time practicing flying in the tutorial. I use the planes quite a bit for quick transport pretty often. A solid tactic I picked up, is jumping in a plane and doing a quick fly-over the entire island scoping out the flags. Find an enemy flag that’s not being watched and parachute in for a quick capture. Good for the XP.

I love this fuckin’ game.

I was first introduced to the Battlefield franchise by Battlefield 2: Modern Combat on PS2. After blowing so many hours perfecting my chopper flying skills I learned that DICE was making a revamped version for the Xbox 360. I told myself that I needed an optimized version of the game I came to adore. So that was the reason of my 360 purchase.

Flash forward four years later and here I am enjoying the Battlefield franchise on the PSN.

It’s incredibly engaging and I hope that any Battlefield newcomers will shut down their Call of Duty for a little while to see what this franchise has to offer. I consider myself a BF veteran even though I’ve never played 1942. Having said that, everyone should check out the game and franchise as it’s worth it. 🙂

The flying vehicles really are the strong points of the BF series. Vietnam had choppers as well, and I spent so many hours playing single player so I could practice. It was a lot harder then, not only due to using a mouse and keyboard, but they gave you much more control over the bird. There was no auto-correcting pitch like there was in BC:MC.

BF42 was my first experience of online gaming and now I can’t wait to play this game. Every review has said it is all kinds of awesome.

Will be buying/downloading this today for the PS3.

I downloaded this on release night and was pretty disappointed with the screen resolution. I’m an old schooler and have a CRT, so the whole game looked pretty bad on my end. I couldn’t see for beans…will eventually have to get myself an HDTV. D:

As for the gameplay, it was definitely a challenge since I’m more used to the Call of Duty games. The land, air and sea were fun to play around with.

I saw some people complaining about the small text and icons on the official forums. That’s too bad. But it seems most developers are catering specifically to the HD crowd these days. This isn’t the first game to suffer this sort of problem either. I recall quite a few, starting with Dead Rising quite a ways back.

Picked it up on PS3 and love it. Thanks for the article, EA should dish you some cash for the kind words.

Nah, I don’t want review copies of games. That means I’m more-so obligated to review games, where as I much prefer doing this on a casual basis. I don’t want to have to review games, you know? I rented and played Prototype – hated it, and returned it within a couple days. If I received a review copy, I would have had to play it through anyway in order to review it. Not my thing.

Finally had a chance to play this last night….and it’s awesome! Such a fun game on Live.

The only thing that’s disappointing (as with all games on Live) is the number of nut cases out there! I literally cannot turn on my headset without hearing some random insults, cursing, racist comments, etc.

If anything, it’s gotten worse lately – and that’s really saying something!

Anyway, back to Battlefield – it’s a great game and I’m glad I bought it : )

Great job on the new Article / Comments toggle. Like the animation. JQuery?

You know what the worst part of the trash talk on Xbox Live is? The inability to block it out. Why is there no option in games to mute voice chat? If I don’t want to hear assholes talking shit, I have to turn my headset on and leave it sitting beside me on the couch. Otherwise, the voices come through my home theater speakers, which is not acceptable considering I have 2 children.

Great job on the new Article / Comments toggle. Like the animation. JQuery?

Oh, I know! It’s awful. I always keep my headset plugged into my controller and muted completely, so I don’t hear the nasty language coming from my TV. The only time I’ll use my mic is when I’m playing with some friends or whatnot.

I’d never played a Battlefield title until now, gave the trial a spin, got hooked and now the only place you’ll find me this summer is in the sunny Pacific!

[…] all now online and you’re more than welcome to wander on over and check them out.Ã‚Â  There are five, four, three, and two star illustrations. No one star though, apparently he’s too good for […]