Shortly after I decided to spend my Friday night getting myself ahead on some of the projects I’ve got on the go, an email landed in my inbox that changed everything. I saw a Growl notification out of the corner of my eye that read, “Subject: Halo 3 Beta – advance code & assets” and I swear my heart sank as my eyes popped out of my skull. Early this evening I spent about half an hour watching some dudes at GameSpot play the multiplayer beta live. Then 2 of my friends appeared on Xbox Live also playing it. I quickly filled with jealousy and suddenly the awesome Crackdown DLC that I was rocking earlier and Command & Conquer 3 (which I rented 2 days ago and only go to tonight) were rendered obsolete. I still can’t get over how this all panned out and I can’t express in words how fucking excited I was when I received that email. 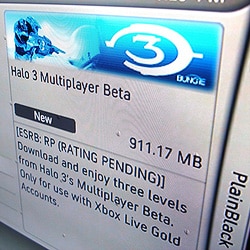 It didn’t take long for the near 1gb download to finish. I quickly customized my Spartan and jumped into a game of Slayer. I finished dead last, which I fully expected having spent a very small percentage of my time gaming online over the past year. But I experienced some of the new hotness right off the bat. In fact, one of the first dudes I came up against used one of those orb shields as seen in the first TV spot trailer. After getting pwned pretty bad, I switched it up to team based games. I still sucked, but I had more fun in the process. The map was very familiar, but way more beautiful than anything we’ve seen to date from a Halo game. There was a giant waterfall on one end that looked fantastic and a stream that cuts through the middle that was also pretty nice to look at. As I was wandering around enjoying the scenery, I stumbled across my first Mongoose – a little ATV that is ridiculous fun! I booted around on that for quite a while, running down a couple dudes in the process. That thing is a good time! There was also a Warthog in the map that I later grenaded the shit out of while a dude was on the turret spawn camping. I could probably go on forever and I’ve only played like 4 matches. 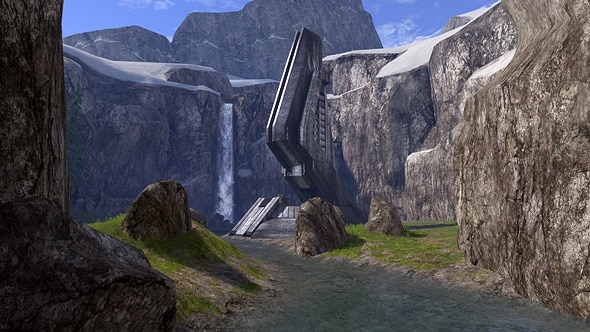 The interface and the way the matchmaking works is pretty awesome. They’ve taken it all a step further, even more so than what Xbox Live is currently doing with Xbox 360 games. One thing that’s really neat, though – is your File Share. Each person has their own little storage locker where you can save and share gameplay videos. After a match is done, you have the option to save it. I’m pretty sure you can save as many as you’re HDD can store, but you can only share a limited amount (I believe it was 9). I saved a couple, but I won’t be sharing them. 😉

I’m going to look into the terms of the beta, but if possible, I’ll get some video online. It should be a lot easier since I don’t have to record while I’m playing.

Any other lucky bastards out there?

No H3 for me until it’s realease, but congrats on getting in early!

I am so jealous! I saw you and David playing on my friends list and wished I could jump in. Provided there are no delays, I’ll be joining you guys on Wednesday when my beta key arrives.

No Halo for me either until Wednesday. Enjoy the early release over the weekend.

You lucky bastard. I’m so jealous right now. Just out of curiosity how did you get an early invite?

I will be playing wednesday! Woohoo!

I can can’t wait to get my hands on it! My Crackdown disk is already in my console (I am playing it of course) and waiting for the magic moment when I can use it for Halo 3!

Thanks for sharing you expereince with us!

Hi to everyone from Italy, i’m waiting for the activation of my account to play halo 3 beta,hope that we italians we haven’t to wait tooo long for the halo beta! my gamertag is lorix, hope to play some deathmatch with you very soon, congratulations for your blog, one of the best i ever seen! ciao

That is freakin’ sweet! So jealous : )

It seems like matchmaking and parties, etc. is fully operational. So it should be fun once everyone gets access to it next Wednesday. Last night there was just over 1000 people playing. I’m sure that number will sky rocket in a few days.

As I told you, Halo2 has left a VERY sour taste in my mouth. At first I played it non-stop but if I go back and play now, I really only last a match before I just can’t play it. Maybe Gears of War has spoiled me. But more so I think the community of glitchers and annoying kids in Halo2 ruined it for me, along with some serious balancing issues and from what I’ve read on impressions and interviews, those balancing issues really hasn’t changed. I read an interview with Frankie from Bungie who said that Halo3 is a mix of good things from Halo1+2. I’m just not sold on this. I’ll be checking out the beta for sure but I really don’t plan to rush out and preorder, especially with the onslaught of good games coming out this fall (Metroid 3, PGR4?, Smash Brothers, etc etc etc)

The new Crackdown DLC IS AWESOME! Seriously, the Harpoon gun is the best gun ever!!!! And Don’t get me started on Forza2. I’ve been DYING for this game ever since it was announced (being a huge Forza1 fan).

I love the Mongoose. I fear the Spartan Laser. The water in this game is incredible.

Halo 3 is exactly what I was hoping it would be.

Let me know what time you are going to play today or tomorrow and I’ll see you online.

I kinda hate you right now haha. Lucky bastard. Well well, nothing I can do about it. Have fun! 🙂

I’m already looking forward to spending Wen night playing once the beta opens up for us Crackdown owners.

I never was a big Halo player but I think I might have to get into more after Wednesday, don’t the people on my friends list kicking my arse too much.

I’m finding the gameplay in HALO 3 to be practically like that of HALO 2. The jump from HALO 1 to HALO 2 was huge. The jump between HALO 3 and HALO 2 is very small.

In fact, I think that the gameplay is mostly the same. The changes in H3 over H2 are more graphical and user interface related.

You lucky bastard. I heard a rumor that this beta key was included in copies of Crackdown, is that true? If so I think I’m gonna go ahead and make my way to Best Buy to pick it up.

OMG… I never played HALO 1 or 2 on the Xbox… but saw some movies and really want to check it out.

Don’t think it’s all my kind of game… but worth checking out – especially ’cause I own Crackdown.

omg i’m so freaking jealous dude, i’m ripping my hair out now lol. Hey my gamertag is NarcolepticGnat. add me and we’ll play on wednesday ^_^ grats on getting your beta early.

I’ve got the Halo 3 Beta … so feel free to add me to your friends list if looking for someone to blast with the Spartan Laser.