At first glance they’re just a bunch of numbers. But then one relates to another and all of the sudden it all makes perfect sense.

It’s amazing how much you can find out about your visitors by analyzing stats. It’s only been a couple weeks since I installed Mint and I’m already seeing a direct relation between user agent (browser and platform info.) and search referrals. 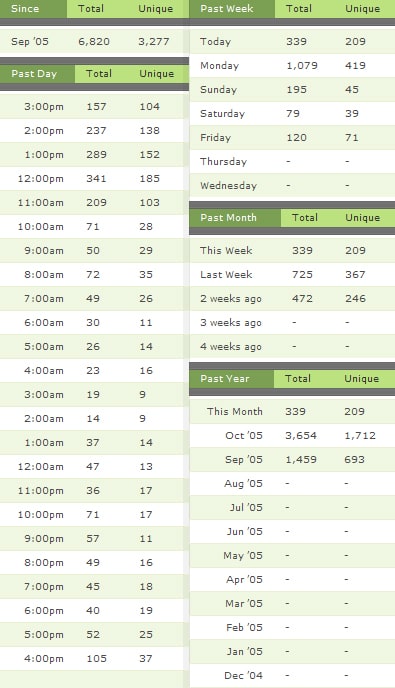 I grew a little more distraught each day when I’d check my stats to find Internet Explorer’s usage rising continuously over Firefox. Then I started paying more attention to common search queries that are helping users find my site. At the top of that list, by a long shot are strings to do with MySpace customization. Back in April I wrote a little rant after trying to customize a MySpace profile for a client. Since then I’ve received tons of referrals from Yahoo!, MSN, Google and FoolFind (who I had not heard of until I started seeing referrals).

So what is to be made of this connection? I think it’s safe to say that those that are still using IE as their primary browser fall into the internet novice category. That’s not to say they don’t know what they’re doing. More along the lines of – they have a browser that shows them webpages, that’s all they need. Where as the more intermediate to advanced users care how those webpages are displayed and care even more about the shit that is being dumped on their computer behind their back. And in turn, make up for the remaining 40-odd-percent.

As a test, I have been thinking about deleting the MySpace Is Garbage post to see how those numbers change. But then again, maybe I shouldn’t go deleting one of my most popular posts. Maybe when/if I actually have some decent traffic I’ll play games like that.