Hey Nintendo, Where are the Wii Accessories?

The Wii’s been getting a fair amount of use since I picked it up nearly 2 weeks ago. Admittedly, a bit less recently since GRAW 2 has pretty much completely stolen the thunder. None the less, we’ve just about worn down the batteries in one of the Wiimotes. On my lunch break the other day I took a trip down to the local Best Buy to grab a couple rechargeable battery packs. To my surprise, aside from the Wifi USB adapter and the different controllers and cables, Nintendo has no accessories available. However, they were stocked with third party accessories covering everything from replacement wrist straps to battery packs and even a docking station for Wiimotes.

Most of the accessories were made by a company called ASiD Tech, who I had not heard of until now. I was disappointed as I normally prefer to stick to first party or “official” accessories as the quality is generally top notch, or at the very least, equal to that of the hardware. Since I didn’t have any options and wasn’t stoked on the idea of having to have an endless supply of batteries on hand, I grabbed a 2 pack of the ASiD Tech rechargeable battery packs. 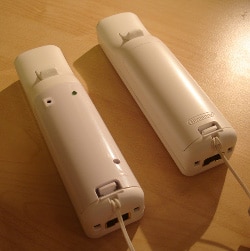 When I removed them from the packaging, the first thing I noticed was the shiny surface. The top of the Wiimote is indeed glossy, but the bottom is matte. I popped it in and barfed a little in my mouth. You know how you can spot a car that drives by that has a replacement door they picked up from the wrecker’s? Pretty same idea here. Not only does it have a different finish – it’s a completely different white and doesn’t match the Wiimote at all. Suddenly, my sleek and sexy Nintendo Wii looks like a mix-matched beater. Not impressed.

But to make matters worse, I held the remote in my hand as I would when playing and felt a couple nubby things against my middle finger. It seems someone thought it was a good idea to put the cable input and a little green light right under where your finger naturally lies. Perfect! I’m sure after a few hours of playing, the sharp edge of the input would cause a nice blister from rubbing.

Needless to say, I’m returning this garbage and getting my money back. I’m really disappointed and totally shocked that Nintendo doesn’t have a solution for recharging the Wiimotes at this point. In my opinion, they shouldn’t have launched without one. Hopefully they’ll clue in sooner than later and get some accessories out there. In the mean time, based on this experience, I’d advise those with a Wii to hold out until then. Not only are the third party accessories cheap looking and ugly, they have a pretty high price point. It cost me $30 CDN for the 2 battery packs.

Well, at least Nintendo has an official carrying case for the Wii..

That’s exactly why I am not using the rechargeable battery pack–I couldn’t stand the colors not matching up exactly.

But it also conflicts with the WiiSkins I have added on to the Wiimotes. All of mine have the silicon covers on them, and they’re a bit annoying to deal with even when just changing the batteries occasionally.. Don’t think I’d be able to handle swooshing them up and down after charging ’em. Or maybe I’m just lazy.

I’ve been scouring the internet for accessories that are more "true" even though they’re not official gear.

That’s more or less the reason I opted for a set of rechargeable AA’s. 4 AA’s came with a charger for about $20USD, with another set of 4 spare AA’s for another $12USD. Not a bad deal overall, considering I’ve got enough batteries to power 4 wiimotes at any given time. Not as convenient as battery packs fitted for the wiimote, but totally unobtrusive to the asthetics.

But then, I’ve also got a stockpile of cheap disposable AA’s in the event of an emergency. Those are leftover from a sale at IKEA. 12 packs for 99cents. w00t!

@andre: Yeah, I’ve seen the carrying case. But I was thinking things that are more practical and useful. I mean, the Wii isn’t a portable console in the least. But it does require batteries for use. It would be nice if Nintendo got their priorities straight. But then again, they should probably be worrying about actually getting some Wiis in store over everything else. 😛

@Jordan: I have debated those WiiSkins – primarily for my daughter. I know she’d like the pink one. But I figured they’d be a pain in the ass to change the batteries so I didn’t bother.

@Jake: I think I’ll be doing the same for the time being. I’ve got a charger lying around somewhere. Just have to pick up a couple more batteries.

I’m still trying to get over the fact that you have a Wii and I don’t. In all seriousness though, Nintendo should have some kind of ‘checklist’ that third party hardware manufacturers have to send their products through.

I would do the same thing. Chuck the trash and get the green back.

Hi Matt… First time post here but been lurking for a while.

My solution is to use these usb batteries. Once they run out you just pop the cap off them, stick one in the back of the Wii and the other in your computer (or where ever takes your fancy). I’m in the UK though, not sure if you can these in the States yet?

At least your shops sell accessories. Here (in the Netherlands) all the accessories are sold out.

We bought a Wii at my work, but we can’t get a second controller.

I ordered a controller, but have to wait 2-3 weeks 🙂

I’m sure Nintendo will bring out more accessories for the Wii, there just a bit busy at the moment I suppose.

I’m sure Nintendo will get one out there eventually, but the accessories out now do suck. That thing BlackPlastic suggested looks great, might have to get some of them myself.

btw nice wallpaper on your iMac there, I’m using the same one 😛

Although I can think of a couple of reasons for the different colour and finish of this thing, the price tag negates that in my opinion.

As for the nicely placed, nicely sharpened cable input… I am truly amazed!

I can’t understand why any company, even… maybe especially a small one, would sell something like that without actually testing it.