Leading up to its release, I had very little interest in GTA V. Mostly due to the fact that I’ve never completed a GTA game, despite having played all of the previous titles. I always reached a point of endless frustration that nearly lead me to throw my controller at the TV. In GTA IV that was due to obscenely long missions with very few (or no) checkpoints. Thankfully, I had no such beefs with GTA V, and throughly enjoyed the 30+ hours it took me to get through the story.

In a word, Grand Theft Auto V is massive. Everything about it. The world itself, the amount of story missions (69), the amount of side quests, the amount of activities, etc. There is just so much content here, and it’s all top quality stuff. Nothing feels tacked on or incomplete, and the most impressive thing about it, is that it’s not overwhelming. I never once felt like I was being pulled in a million directions, or that I didn’t or wouldn’t have enough time to complete the things I wanted to. You’re free to move at your own pace, and there’s no one pushing or pulling you in directions you don’t want to go. Personally, I enjoy taking care of the main story first, and only embark on the odd side quest. This is how I approached GTA V, and now that I’ve completed the story, I’ve spent several hours exploring Los Santos and the surrounding areas and getting to know some of the locals. 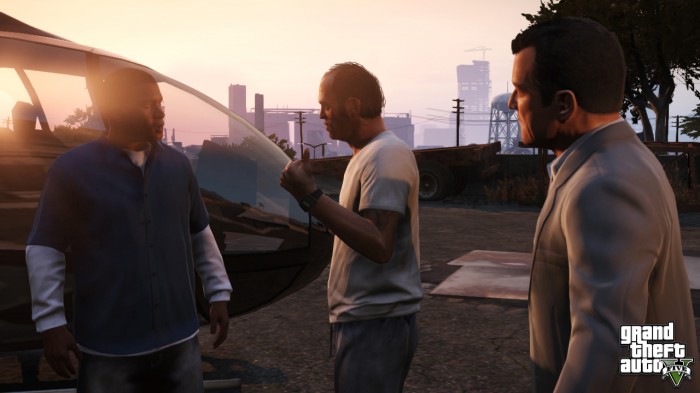 Unlike previous GTA titles, you assume the role of three very different characters. Michael; a retired bank robber, living wealthy in the hills of Los Santos with his family, who pretty much hate him. Franklin; a gangbanger from the ghetto who spends his days repo’ing cars for a crooked sales man, small time drug deals, etc. And Trevor; a psychotic redneck asshole who’s into everything he can get his hands on, from running guns to Cuba, to cooking meth for the locals. Each character has their own missions, which cater to their specific lifestyles, and their paths cross in some very interesting ways. Eventually, they end up working together, more or less, to perform some larger scale criminal activities.

The biggest missions in the game, are heists which involve not only the cooperation of all three of the protagonists, but also a few hand-picked specialists. Before each heist, you’re given a couple choices; how you want to handle the heist (an A, B choice), and who makes up the team. There’s usually a few setup missions before you can embark on the heist, which really makes them feel much more significant than other story missions. The best part about the heists, is that they are multi-stage, and have you swapping between characters through-out. Usually in a dramatic or cinematic fashion, which make for some of the most memorable moments in the game. 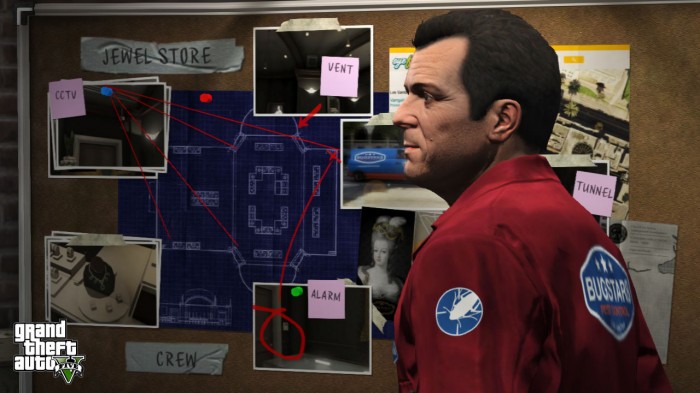 The map is said to be bigger than San Andreas, GTA IV, and Red Dead Redemption combined, but it honestly didn’t feel that big. GTA IV’s Liberty City felt absolutely huge to me, with its three islands. None the less, it’s an impressive space to wreak havoc, and quite beautiful in spots. There’s plenty to explore, and good reason to go off the beaten paths. Even nearing 40 hours of game time, I still have some large holes on the map.

Gameplay wise, I felt quite at home with GTA V, which is more than I can say for its predecessors. The cover system is much improved over GTA IV, and everything else feels pretty effortless once you get the hang of the controls, which are fairly standard for a third person shooter. Each character has a special ability, which can tip the scales in your favour, depending on the situation you’re in. Michael has bullet time, Franklin has bullet time while driving, and Trevor has “rage”, which increases damage dealt to enemies.

The story itself isn’t spectacular, but it leaves you never really knowing who’s in control, and if things are going to go as planned. There are plenty of bumps in the road which steer the trio in different directions, and some history between Michael and Trevor that’s dug up later in the game. In the end, a player choice decides which of the three possible outcomes will occur before the credits roll. 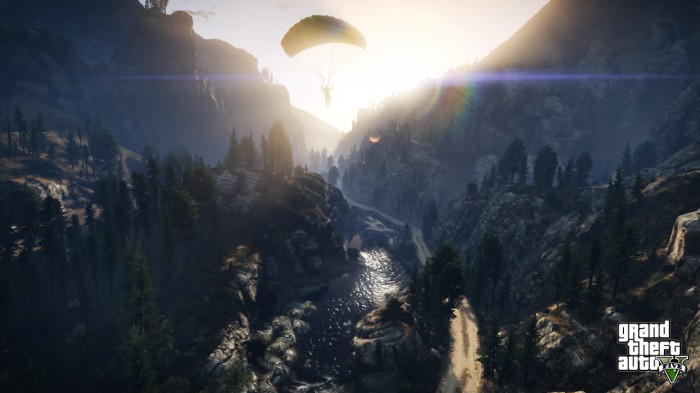 Alongside the story, are countless side quests. Some specific to individual characters, others random events that anyone can stumble upon. These includes things like sky diving and base jumping with an adrenaline junky, helping out friends in need with their every day tasks, gun runs, hijacking vehicles, and so on. There are activities which can increase player skill levels, like foot and bicycle races, shooting ranges, flying lessons, etc. And finally, if you just want to hang out and have fun with some friends, you can pull out your phone and call any of your contacts and invite them. Golf, tennis, darts, yoga, watch television, go to a movie, drinks at the bar, lap dances at the strip club… there’s plenty to choose from.

Then there’s GTA Online, a completely separate entity that shipped with GTA V and is free to play. It launched a couple weeks after the release date, and had a pretty rough start, but I hear things have smoothed out now, and GTA Online is said to be a lot of fun with a group of friends. I haven’t played it myself.

In the end, I’m blown away by the quality and sheer size of GTA V. To me, it feels like it has more substance than any of the previous games, and the violence and coarse language doesn’t feel so forced. Or maybe I’m just used to it now? In any case, I’m certainly glad I gave into the hype and picked up this game. It’s definitely money well spent, and despite having already sunk close to 40 hours into it, I anticipate several more before I’m done with it.

One unexpected side effect to playing GTA V, is that it made me despise Assassin’s Creed III a little bit more than I already did. It proves that it’s possible to create an absolutely massive open world game, without having to sacrifice quality. I firmly believe ACIII suffered due to hitting the yearly release window, and hope Ubisoft doesn’t make the same mistake with ACIV, which is due out in a few short weeks. Great review as always, I just played like 5% of the game ’cause my PS3 got the YLOD, but I was amazed at this game. I’m just curious of why you bought the PS3 version instead of the XB360 this time?

Sorry to hear about your PS3.

I ended up getting the PS3 version simply because it was the only copy left on the shelf at my local rental store. I would have grabbed Xbox 360 otherwise. I did end up buying the game, but having already put around 20 hours into it, I wasn’t keen on starting over, so I just stuck with PS3.

Excellent review on GTA V. I myself have a lot of positive things to say about this game, and the truth is that Rockstar has surpassed my expectations with this installment. The only disappointment was with the GTA V online launch delays, but thank goodness that is now all over and we can all enjoy the epic multiplayer mode as well.