I’ve always enjoyed racing games. Dating back to my first console, the Nintendo Entertainment System, R.C. Pro Am was a game that I sank a huge amount of hours into. Through the console generations, racing and driving games have evolved into full-blown simulations. Hell, we even play them with realistic wheels and pedals for the closest possible experience to being in an actual vehicle. Personally, I get more enjoyment out of a game that lets me drive cars that I otherwise wouldn’t have the chance to, and on roads that will likely never be beneath me. I’ve played my share of racing games over the years, but none have nailed the experience I’m after as well as Forza Motorsport, and the fourth iteration is no exception. 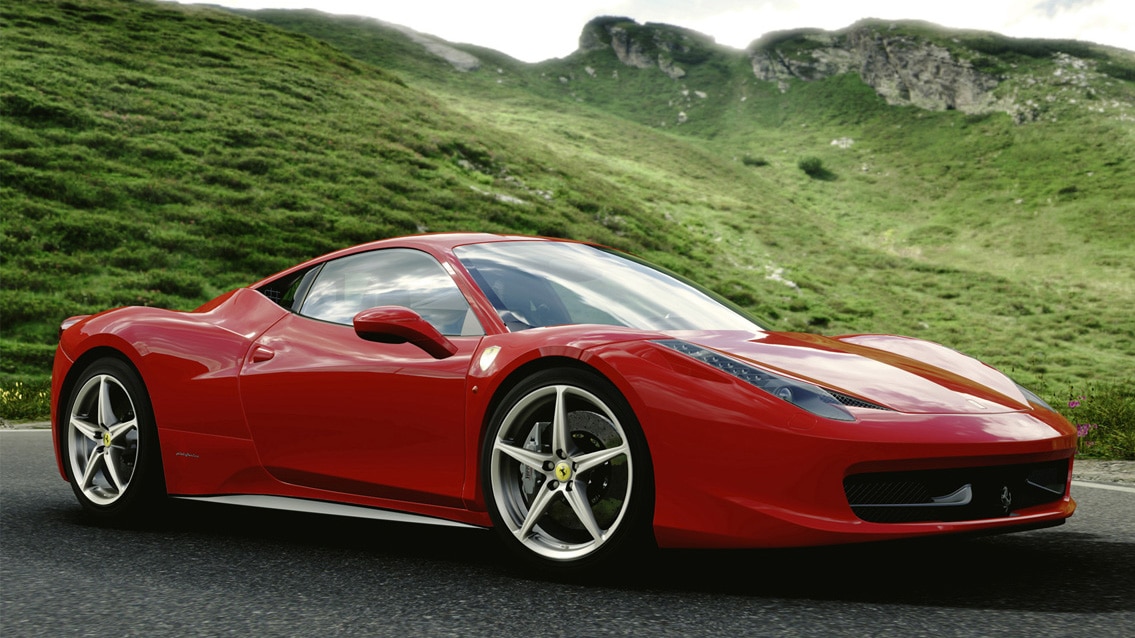 Believe it or not, but the car models really do look this good.

When Shift 2: Unleashed (AKA Need for Speed: Shift 2) was released back in March, I rented it hoping for a similar experience to its predecessor, which I quite enjoyed. But an hour into the game, I was ready to call it quits. It lacked the excitement of the previous game and was forcing me to race D and E class cars with no modifications repeatedly. I understand that you need to climb the ladder and gain experience, but how many times are we supposed to start from the ground up and play these boring low class events before it becomes tedious? Hint; we’re already there.

The MotorStorm franchise is a weird one. There’s absolutely nothing “simulation” about it, but it can be a lot of fun at times. Or at least, I had some fun playing the first two games in short bursts. The third game in the series, MotorStorm: Apocalypse is utter shit. Instead of focusing on the fact that you have monster trucks and dirt bikes (and everything in between) racing down mountains and through rain forests, they tried to jam this awful story into it. Tied together with un-skippable cut-scenes featuring awful characters and horrendous voice acting, it was nothing short of an atrocity. To top it off, the first dozen or so races are so insanely easy that it feels like you’re doing time trials. Needless to say, I couldn’t stomach this game for more than a few hours.

So as you can see, my experience with racing games as of late has not been enjoyable. With the onslaught of games on the horizon, I wasn’t counting on playing Forza 4 until I had a chance to get through some of the other “high priority” games.  But when I saw mentions of it on Twitter through-out release day, it got the better of me and I raced (pun intended) out to my local video store to rent a copy. Not even 5 minutes in, I find myself sitting on the edge of my seat, with a smile from ear-to-ear. 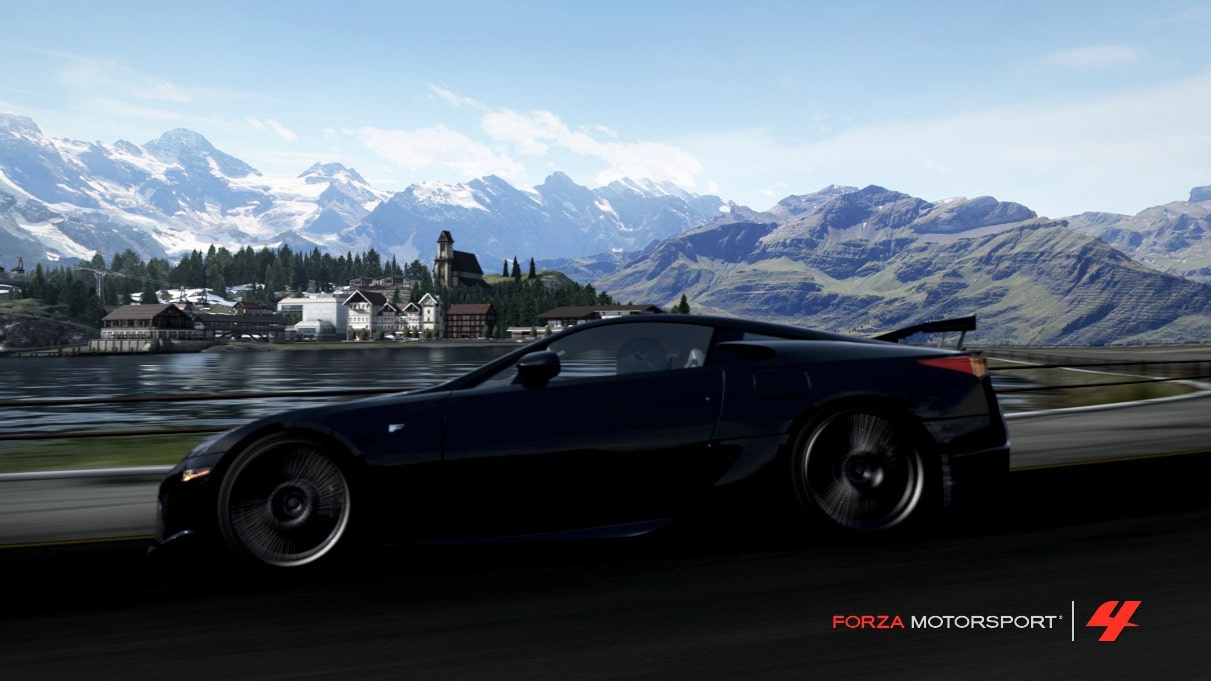 When it comes to video games, the first impression is of the utmost importance. That first hour better be a good one, if people you want people to sink another 8, 10, 20+ hours into it. Forget about the first hour, in the first 5 minutes of Forza 4 I had watched an enthralling intro movie (below), raced a Ferrari through the Bernese Alps, and received some bonus credits and cars for importing my Forza 3 profile. That is how you get people stoked on your game.

I’m only a few hours into Forza 4 and just reached driver level 10, but I can see that I’ll need to pick up a copy of this game, as it’s definitely followed in its predecessor’s footsteps and built on the incredible foundation laid by Forza 3. As Rock Band 3 is to rhythm games, Forza 4 could very well be the definitive racing game of this console generation.

It’s been a long time since I’ve picked up a race game, as I seem to tire of them after the first few hours of playing. I’ve heard a lot of good things about this game and am looking forward to renting it and giving it a spin for myself.

I’ve had the same relationship with racing games over the past couple years. I’ve played so many, starting from the bottom and having to race sucky low-end cars for hours on end simply does not appeal to me anymore. Thankfully, Forza keeps things interesting and never forces you to remain in a given class.

Due to a number of erroneous "choices" made, let alone the ridiculous amount of time spent developing it, I was convinced Gran Turismo 5 would turn out to be somewhat of a failure. Obviously, that’s just my personal take on Sony’s exclusive, but reading this, in addition to hundreds of other opinions on the matter, only reassures me that my gut feeling spared me the cost of a game I wouldn’t have played beyond that first hour.

In my opinion, Forza Motorsport has always been the better and more fun racer between the two, and by the looks of it, Forza 4 makes sure the situation stays that way.

I definitely agree. Forza is a modern racing game and sets the bar with every new release. Most others are stuck in their ways (Gran Turismo), or are playing catch-up.

I’ve always been one who enjoys racing games and have been a staunch fan of the Gran Turismo series, the latest version of which I personally find really enjoyable. Whilst I agree that in some instances with games, forcing the player to race low level races in terrible cars is quite tedious, there are many aspects of the game that make it work and keep you playing for hours.

Having only seen the Forza 4 advert on TV so far, I’m already massively intrigued. The graphics look stunning, the game-play looks realistic and from the reviews I’ve read, it seems like a game that has the staying power of the best around.

Just out of interest though, what is it about the Forza series that makes it stand out from the Gran Turismo one as Sebastian certainly isn’t the first person I’ve heard say that.

If you’re coming from a history with Gran Turismo, you’re in for a real treat! I’ve always felt that the GT games were behind the curve in terms how they lay out the career mode, and often felt very tedious. I could never stand the fixed rear camera, either.

Forza is all about pleasure. You play the game however you want. Doing the events of your choosing, with the cars that you want to race. You’re never forced to drive a certain car, or even locked into a given class. You can change from event-to-event, so the monotony of having to drive an E class car for an hour before you can upgrade to D (which is still dull), doesn’t even exist. As I mentioned in my review, the first race you do in Forza 4 is in a Ferrari.

As you’ve come to expect, Forza 4 packs a huge amount of content and will consume hours and hours of your life, if you let it.

Nice review, I haven’t had much to do with any racing games on consoles for a long time.

If you really enjoy racing simulators, by far the best is iRacing. iRacing is a web based service and has some great features. It’s all online racing, and it’s scheduled races. Also has a rating system that you need to work through before you can race cars in official sessions, and also has a safety system which means if you keep crashing in to guys, you’ll drop your licence level. Oh and there’s stewards too which can ban members for weeks at a time for driving irresponsibly.

It’s tough competition, but if you’re in to racing, check it out for sure!
http://www.iracing.com