Similar to Dishonored, Far Cry 3 pretty much snuck right past me. I mean, I knew it was on the horizon and had heard lots of people mention it on Twitter and such, but hadn’t even watched so much as a trailer before its release. Once it was in the hands of gamers across the globe, the good word quickly spread, and Far Cry 3 was pushed to the top of my “do not miss” list.

Why wasn’t I paying attention to begin with? Well, that all comes down to my history with the franchise. I recall picking up the original Far Cry (or, FarCry as it was called back then) for PC on release day. I had played the demo countless times, and was anxiously awaiting the full game. I don’t remember exactly why, but at some point it flat out stopped being fun to play, and I threw in the towel. The same happened with Far Cry 2 just a few years back, and I know that was all to do with tedious travelling. So while I played the previous games, I reached a point where I no longer wanted to continue playing, and never completed them. Thankfully, the pattern was broken with Far Cry 3, and I enjoyed every single second of the campaign. Minus being mauled by a tiger, or two. 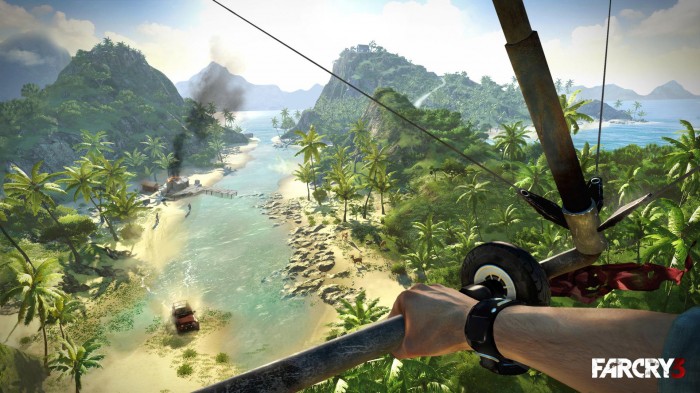 Travel by air, land, or sea.

One of the neat things about the Far Cry games, is that they’re not a continuation of the previous game, in any sense. New location, new lead character, new story. One thing these games share in common though, is the beautifully rich jungle setting. It’s become a staple of the franchise, and the environment in Far Cry 3 is the most impressive yet.

There’s competitive multiplayer and 2-4 player co-op missions, but all I was interested in was the single player campaign, and it did not disappoint! It has one of the best intro sequences in a game that I’ve played in recent months. After a short scene, the stage is set and your thrown into a hostile environment, trying to stay alive. Without spoiling too much; you play a dude named Jason Brody, who is on this tropical island vacationing with his two brothers, girlfriend, and a couple others. They’re kidnapped for ransom, and of course, things go from bad to worse. Jason manages to escape, sets out to find his friends and get the fuck out of dodge. Along the way, he’s taken in by a tribe of natives who claim he is a warrior within, and brand him with their tattoos (or tatau, as they call them). His tattoo eventually turns into a half sleeve on his left arm, and with each new piece, a new ability is learned. Skill points are awarded as you progress, which are then spent on abilities (perks). 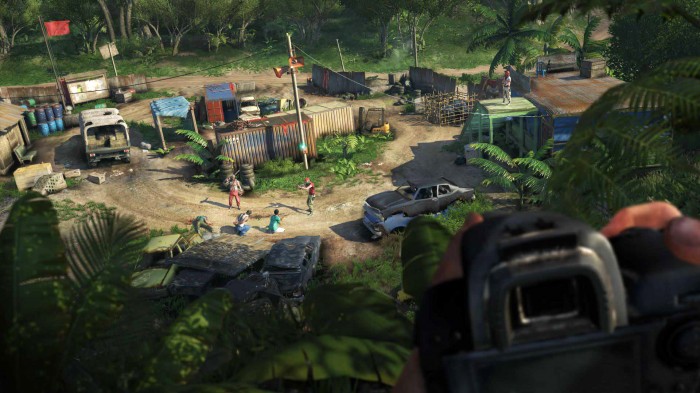 The camera is used to “tag” enemies and track their movements. Handy for planning an attack on an outpost.

The island itself is huge, and similar to Assassin’s Creed, the map is revealed in segments as you capture radio towers. There are countless activities to keep you busy long after the campaign is complete, or along side the main story. Such as; liberating enemy outposts, running supplies in timed point-to-point races, hunting challenges, assassination contracts, and other miscellaneous tasks for the locals. As you would expect in an open world game, there are plenty of collectibles to be found as well. Relics, lost letters from fallen world war 2 soldiers, loot crates, and memory cards taken from enemy laptops.

Citra, leader of the Rakyat tribe.

The story itself is pretty interesting, and delivers some nice plot twists. Character models, particularly the eyes, are pretty incredible. The game is played entirely first person; even during cut-scenes, you are always viewing the events through the eyes of Jason Brody. When characters are speaking to you, they truly feel like they’re speaking to you. Full eye contact, lots of emotion in their facial expressions, and top notch voice acting really bring these characters to life.

While you can play however you’d like; guns blazing, up-close and personal stealth kills, or long-range sniper action, the game puts an emphasis on stealth, and it’s actually required on more than one occasion. Once I unlocked all four of the weapon carrying spots, I was typically packing an assault rifle, sniper rifle with a silencer attachment, flamethrower, and grenade launcher. You always have a knife at the ready for stealth kills, so that’s 5 weapons, plus explosives (grenades, molotovs, mines, and c4 with detonator).

In the jungle, you’d expect to find a wide range of plants and animals. And this is true in Far Cry 3. But they’re not just there to be observed. The tribe teaches you to craft items that will aid you along the way from them. For example, leaves from different plants can be used to craft syringes that will give you health, or enhance hunting and combat abilities for a short time. Animal skins can be used to make weapon holsters, wallets, pouches for carrying items, etc. Once I acquired a sniper rifle, I went on a hunting spree and upgraded my gear so I was able to carry loads of items and weapons.

I don’t have many beefs with Far Cry 3. If anything, there could have been more checkpoints during some of the longer missions. Dying, and having to replay a 3 or 4 part sequence was kind of a bummer. Load times are super long, and not just the initial load. Even when you’re retrying a mission after dying, it can feel like an eternity at times. But given that there is no intermittent loading once you’re on the island, it’s really nothing to complain about. I’m just looking for negatives now, and not finding much worth bringing up.

Of all the games I played over the past year, I’d say Far Cry 3 is near the top, if not at the top of my most favourite list. It’s technically impressive, delivers an entertaining and engaging story, and is simply a hell of a lot of fun to play! The jungle setting of Far Cry 3 is the best I’ve played so far, even better than Crysis. I like the physics of the game; Tigers hunting deers, bears chasing and mauling people, NPCs interacting with each other. The only thing I don’t like is the lack of cool weapons and you would find it obsolete to acquire money once you have bought all the weapons and completed the skill trees. However, the challenge is still there and perhaps you might need to check this Far Cry guide: http://www.cheatmasters.com/cheats/37799/Far_Cry_3_cheats.html . Sorry for the spoilers, by the way.