It’s been months since I’ve written anything remotely personal. I think my daily use of Twitter and Flickr have had a lot to do with that. I do get all of that out there, but never much at a time given Twitter’s 140 character limit, and all. There’s a lot going on in my life right now and things be a-changing. Of course, this is to be expected when you’re bringing a baby into the world.

How Our Baby is Doing 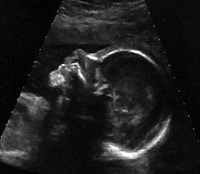 Last week we had our final ultrasound with a sonographer downtown Toronto. This was our 8th ultrasound, 6th medical – we did a couple 3D ultrasounds a few weeks back (the second being to verify the sex), but they were purely for our amusement. The reason we had so many, was due to the technician at our local hospital claiming there was reason to be concerned regarding the growth of our baby’s head. After the 3rd ultrasound with her, we received a call from her superior informing us that the technician wasn’t overly qualified to be making these calls and she wanted us to head downtown to see someone who actually knows what they’re doing. Long story short, the sonographer in Toronto assured us that everything is a-ok. In fact, he used the word “perfect” numerous times through-out the ultrasound. So after weeks of having this terrible feeling that something could be wrong with our baby kicking around in the back of our minds, we’ve been assured that we’re in the clear. Phew!

You might be wondering why we were going in for so many ultrasounds in the first place. Back at the beginning of this year, we had a miscarriage due to a chromosome abnormality. When this sort of thing happens, they tend to keep an eye on you the next time you’re pregnant and run extra tests and screens to try and detect any potential problems early on. 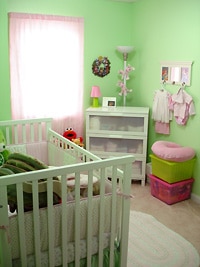 We’ve only got about 3 months to go now, and with Christmas followed by “the broke season”, we thought we should get a jump on things instead of leaving it all to the last minute. Deanna had been doing some price checking from Canadian stores and comparing to some online retailers in the US. She quickly discovered that there was a lot of money to be saved if we could buy things in the States. Most US retailers don’t ship internationally, but luckily my Mom is in Michigan so we had things delivered to her place. We went for a visit a couple weeks back and were able to bring it all back with us. In total, we saved around $400 by doing this on the few big things we got. While it might appear that we’ve got everything we could possibly need, this isn’t the case at all. We still have a lengthy list (which is terrifying!) of necessities and other fun things we’d like.

My 2001 Grand AM has served us well, but it’s been costing me roughly $1000 a month for the past few in-a-row, so I figured it would be a good time to get rd of it. Not to mention, when the baby comes, all of the sites are taken. So when Deanna’s Mom comes to visit or Hannah has a friend over, we’re pretty much screwed. It didn’t take long for the Mazda5 to catch my eye. It has 3 rows of 2 seats, sliding doors and a rear door like a van, but it’s just a little bigger than a typical car and looks like an over-sized hatch-back. I picked up my first new car last Wednesday – a pearlescent white 2007 Mazda5 GT! Needless to say, I’m crazy excited about it and absolutely loving my new wheels. Not only is it not a minivan, but it’s received all sorts of praise when it comes to safety (the GT came with side-impact airbags), which is obviously important. It’s also pretty decent looking, considering it’s technically a stationwagon. Clearly, not the vehicle I would buy if I only had myself to worry about. But given that I’ll be driving around our family of four in no time, it seemed like the right choice.

We’re in the midst of re-arranging our living room now. The couches we’ve had for the past few years were simply not comfortable… at all. Ever had your asshole “fall asleep” on you? Cop a squat on one of those couches for a few minutes and you’re guaranteed it will happen. Worst! Needless to say, they were the first things to go. Our wrought iron, glass-top table went at the same time and we replaced both over this past weekend. Man, is it ever nice having a couch that has some give to it. I’m still pushing to upgrade our cramped little entertainment unit, but not sure if that’ll happen before the baby arrives.

I think you should get some wallpaper with XHTML all over it for the baby’s room. That way she’ll be coding before she can talk!

Wait… by the time she gets older XHTML will be obsolete.

Very nice set of new wheels, and props for paying the extra $ and getting the GT with side-impact airbags.

I’ve heard many of my friends and relations say that no matter how much you **think** you’re prepared for a new arrival, when the time comes you just aren’t.

Full-scale military operations ain’t got shit on planning for a baby.

Congrats and best of luck.

Glad to hear that everything is going well with the pregnancy!

We’ve been practicing tons and should be ready to baby make in the spring.

I was signed in as Matt before, lets try this again!

Ptown I seriously laughed out loud. Keep up the good work 😉

I have two boys and they are a blessing and a pain all in the same sweet little package.

I just had my first kid 6 months ago (gave his nursery a good makeover Super Mario Bros 3 style!) and we we had the same experience you did with somebody telling us we should be worried about his head size.

We got really worried since I guess head size markers are an indication of autism and stuff (I think) but happy to say that after we got it rechecked, everything was "perfect", and we got a super smart great little guy.

I don’t check your site as much as I should Matt, but best of luck to you and yours!

(And I hope you get a good kid like I did, slept through the night almost IMMEDIATELY)

Thanks for the kind words and congrats and all that. Much appreciated. 🙂

@Stephen Davies: Dude, we’re prepared. I’m usually one of those people who never thinks they’re prepared but really is. This time, I know we’re set. Deanna’s made sure of it.

@Bush Mackel: Sounds like you lucked out! Sorry to hear you went through the same constant worries that we have. But glad it all worked out in the end.

I’m super stoked that everything has worked out for you guys. It looks like you’ve got it all sorted out. So much better than scrambling at the last minute. Congrats again!

[…] I decided to start winding down my presence and involvement on the internets. Simply because I knew we had a baby on the way (due within a week!) and free time was sparse already. The traffic coming into my inbox has slowed […]