Having spent nearly 50 hours with Destiny (not counting the alpha and beta tests), I feel like I finally have enough experience to review it. I probably could have sat down to write about it some time ago, but any time it came to mind, the urge to play out-weighed my desire to write. Destiny has had a firm grip on me since the alpha back in June, with no intentions on loosening.

Easily one of the most anticipated games of 2014, Destiny was met with mixed reviews from critics and gamers alike. And while some of their negative points are fully justified, Destiny is a different type of game, and I feel like a lot of people flat out misunderstood what Bungie has set out to do. It’s not an awesome single player game, or an incredible multiplayer game, or an epic RPG, or… you get my point. Destiny to me, feels like a framework for a franchise that will be around for years to come. Bungie has laid the ground work for something truly epic, and we’ve just scratched the surface. Destiny isn’t any one thing. But when you factor all that it has to offer together, you end up with something pretty incredible.

I don’t think it’s possible to write about Destiny without comparing it directly to Halo, however unfair to Bungie that may be. But come on, Halo is all they’ve done for over a decade, and it shows. From the enemy types, to the floaty jump, to the absolutely beautiful musical score; Destiny is definitely a Bungie game. And that’s not a bad thing. Unless of course, you’re not a fan of Halo.

Although there is a huge amount of things to do in Destiny, your course is one directional at the start. When you first fire the game up, you create your Guardian, then the campaign starts. There’s no option to jump into multiplayer, as it’s not a separate component, as with most other games these days. In Destiny, you have to reach level 5 before you can even enter The Crucible (multiplayer). Furthermore, when you start to explore The Tower (a type of hub for players), you find several characters offering weapons and armour in exchange for vanguard and crucible points, which also require a certain level of each to be reached before you can purchase. You don’t even start earning points until you reach level 18, and things really only start getting interesting at that point. In short, Destiny is a long term game. You’re looking at spending dozens and dozens of hours, if you plan on reaching the absolute level cap, 30.

Typically, I’m a single player guy. I like to jump into a game, and play it through to the end on my own. Then I usually move onto the next game, and rinse and repeat. Destiny’s story is such a minor part of the overall experience, that I believe this is why so many people have been turned off. But completing the story is really just the beginning. By the time you’re done with it, your character is right around level 18-20, which is when the game really opens up and shows you all that it has to offer. Through-out the story, you’re taken to Earth, Earth’s moon, Venus, and Mars. Each planet offering a new alien species, with varying abilities and increasing in strength. The gameplay doesn’t change much, but the scenery and enemies sure do. 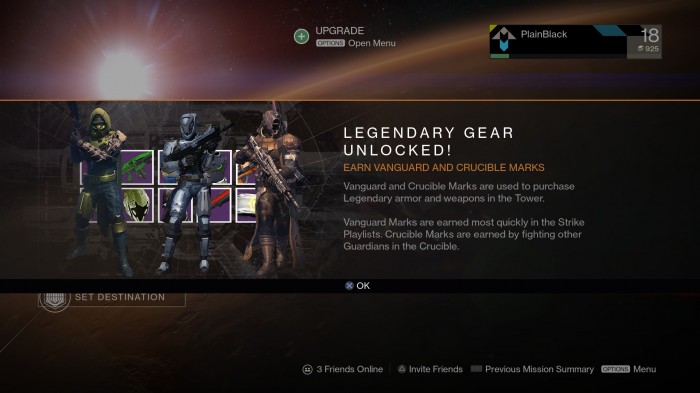 Aside from your weapons, each Guardian class has two sub-classes, each with their own sets of abilities and a super power. These too, are unlocked and upgraded over time. Once I completed my primary sub-class, I moved onto the secondary sub-class and only used it while doing patrol missions and replaying story missions. When I venture into the Crucible, I switch back to my primary sub-class, to ensure I have maximum abilities. 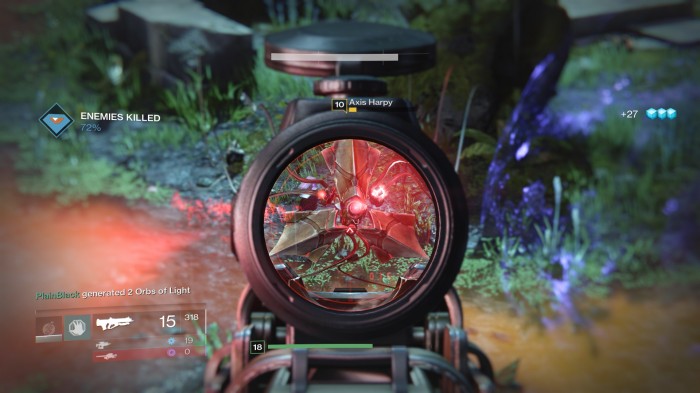 Character customization is pretty sweet in Destiny. When you start off, pick a class, gender, and design your character. From then on, you can’t make any changes to your character itself, but you are forever finding new gear and shaders which can alter the colour scheme of your armour. Similar to weapons, armour can also be upgraded, and new upgrades become available as you wear each piece of armour. Common gear only requires glimmer (the game’s main currency) and common materials to upgrade. But Legendary armour will have you scouring planets for more rare materials and even artifacts in order to upgrade.

Once you’ve complete the intro missions, you’re able to buddy-up and play the remainder of the game co-op, regardless of the level your friends are at. Mind you, playing early missions with a friend who’s above level 20 won’t be as much fun for you, as they’ll be dropping enemies like flies, while you’re be unloading full clips on them. The story itself feels pretty flat. It starts out as this grand adventure, spanning our entire galaxy and affecting every living being in it. But you only end up visiting Venus, Mars, and Earth’s Moon by the time it’s all said and done. Having finished the campaign a few weeks ago, I have a hard remembering exactly what went on, but I could tell you every little detail of the Mass Effect games.

Each planet has its own set of missions, and you can jump into Patrol at any point, which is basically online free-roam with side-quests. Patrol missions range from clearing an area of bad guys, to fetching items for folks back in the Tower, to scanning environments. Nothing super exciting, but this is how you earn Vanguard and faction experience in order to get your rank up. There are also collectable items unique to each planet, which can be traded in for XP and points, or used for upgrading legendary weapons and armour.

Though I’m yet to play one, Raid missions are said to be the most challenging aspect of Destiny. At the time of writing, Vault of Glass is the only one to be released, and I’ve read that only 1/4 of players actually finish it. As you might expect, the stakes are higher, as are the pay-outs. With rare materials and gear being awarded, there are plenty of reasons to embark on this raid. Personally, I just reached level 26, which is the difficulty level of Vault of Glass, so I’ll be attempting it soon.

“The Crucible is no place for mercy.” You can say that again! After playing co-op missions for a while, the Crucible can take some getting used to. Other players are fast, far more agile, and have way more effective weapons than typical enemies. This is because, like you, they’ve been spending hours upon hours collecting gear and weapons, and upgrading every last bit of it. But in most modes of the Crucible, gear and weapons strength is zeroed out to deliver a more balanced experience. Other perks such as increased stability, faster reloading, etc. still apply.

Then there’s the Iron Banner; a limited time multiplayer mode which takes all of those upgrades into account, and is the ultimate test of skill. In other words, if you’re not a high level player with heavily upgraded gear, you’ll want to steer clear of the Iron Banner. 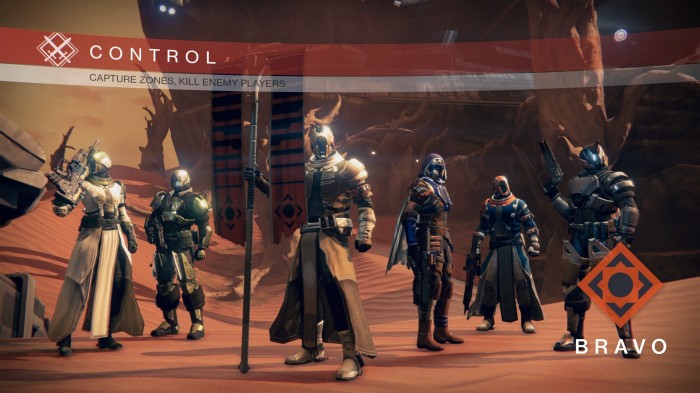 Game modes are pretty standard here; free-for-all, team deathmatch, and capture and hold. Control (capture and hold) is my favourite game mode, as it gives you an objective aside from killing other players, and keeps the fighting centralized around each control point. Some maps are large enough to warrant vehicles, but most are medium sized, and the maximum amounts of players for a game is 12.

I really wasn’t a fan of the Crucible during the alpha and beta, but it’s really grown on me. I love how it’s part of the core game, and all of the gear you’ve collected/earned goes with you.

The make or break point for Destiny isn’t its story, or its competitive multiplayer. It’s the gameplay itself. In the end, all you’re doing is running around shooting things. So if you don’t enjoy Destiny’s gun-play, you will grow tired of it very quickly. I for one, absolutely love it. Whether I’m fighting low-level drones, or hulking high-level captains, or head-to-head with other players in the Crucible, I’m having a great time and enjoying (nearly) every second of it. When my friends start ragging on the game, whether it be the “short” storyline or “limited” gameplay types, I find myself constantly going back to my belief that what we’ve seen is only a few chapters of a much larger title. It’s like Game of Thrones/Song of Fire and Ice where simply reading book one doesn’t give you anything – you jump in during the middle of something big with tidbits of backstory and no true conclusion at the end of the book.

Your alpha/beta impressions won me over to get a PS4, especially to be able to play Destiny in it’s full glory. Bought Destiny on launch day and still playing it. I have the same ‘mixed’ feelings. I enjoy every second, the shooting is superb, the gameplay/gunplay feels awesome and I just can’t get enough of it. Sometimes I just wander Earth (my favorite environment) in Patrol and kill low-level enemies and hunt for the Public Events. And still have a great time.

I would love to play the Raid, just turned lvl 26 as well, but I know I can’t dedicate more than 2 hours on some evenings to playing. And I don’t have 5 friends to play with :S

I agree, the story was not something memorable. I haven’t even played all missions on Mars yet, it’s just not very compelling.

But that being said, I start to notice I want something more/different to play. Can’t wait for their DLC, but probably will get the new Call of Duty to fill the gap.