It’s as good as I expected, and then some. If you played and loved the original series – get Call of Duty 2 without thinking twice.

The Good: Same old super intense gameplay we’ve come to love from the COD franchise. No health meter leaves you focused on the gameplay instead of hunting for med packs. Grenade indicator a nice touch for single player campaign.

The Bad: Slow downs when lots of action on screen.

This time, there have been some changes made to the gameplay and campaign structure which are all for the better. The Russian campaign is first up, but instead of playing it all the way through to get to the next – you unlock the British campaign part way through and are given the choice to continue on the Russian trail, or switch to that of the British. Similarly, the American campaign is the last to be unlocked and is only done so after you’ve completed about 2/3s of the British campaign. But it is well worth the wait…

The American campaign starts out with the D-Day landing at Pointe Du Hoc, which was nice for a change of pace. The objective is to scale the cliff side and take out the German artillery that is beating down on Omaha Beach. As expected, it’s insanely intense with gun fire and grenades coming from all directions as you make your way through the trenches to destroy the beach heads. Perhaps the most memorable and satisfying mission in the game.

As I have with the previous COD games, I enjoyed the Russian campaign the most. It is once again, the most frantic and has some of the best gun battles I’ve ever experienced in a game. There’s one mission where you have to hold a large building as German troops storm the town. If you don’t take them out before they reach the building, they’ll come in one of the many entrances and sneak up behind you. Makes for a nerve racking experience as you’re constantly looking back.

Visually, COD2 is an improvement on many levels over the original series. The models are far more detailed, building architecture looks incredible and the newly added clouds of smoke are surprisingly realistic in their appearance and behaviour. You’re equipped with smoke grenades which come in handy when you’re pinned down or need to cross an occupied street, but can also lead to a quick death if you’re met by an enemy as you emerge from the opposite end of the cloud.

The soundtrack is good, but not as thrilling and noticeably present as that of the original. Unfortunately, Michael Giacchino didn’t score COD 2. He’s one of my favourite composers and is responsible for the likes of the Medal Of Honor series (up until Pacific Assault), the original COD and United Offensive expansion as well as Mercenaries. He’s also done many movies and tv series including The Incredibles and Lost. His list of credits is pretty impressive, to say the least.

There’s one drastic change in COD2 – and that’s the health system. There isn’t one. There’s no health bar or icon to show how you’re doing. If you get shot repeatedly, you will die. If you get shot a couple times, you’ll see some blood splatter around the edge of the screen. If you fall back to cover for about 10 seconds, you’ll be good-to-go. At first, I didn’t really like the re-generating health. Felt too “Halo”. But after playing a few missions and not having to leave a battle to go and find a magic box with a cross on it to make me all better, I realized why they made the decision to switch it up.

COD2 runs pretty well on my machine at medium detail with 2x anti-aliasing. Although, the frame rate leaves a little to be desired. This is nothing new if you’ve played previous COD games. The gameplay video definitely has some slow downs, but you have to consider that my machine is capturing at the same time it’s trying to render all the on screen madness.

Conclusion: It’s as good as I expected, and then some. If you played and loved the original series – get Call of Duty 2 without thinking twice. 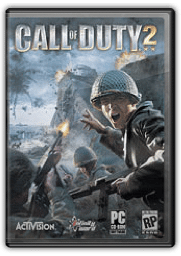 I don’t know how you get any work done with those games sitting on your HD:P

Damnit.. There is just not enough time in the day for this.!

Great stuff, i love the whole detail of everything, and the missions look amazing, i cant wait to play this game. I loved how you followed the bodies falling down in that american mission. The British desert battles look great and intense aswell, and the tank battles, haha great stuff.

Thanks for the video.

I should of checked this earlier instead of buying that damn Javascript book. Ok, this game has to be my next purchase. That video was a great selling point. 🙂

My favourite WW shooter has to be Medal Of Honour: Allied Assult, but I am yet to play Call of Duty, so that might change.

Andrew: I have incredible will power. 😉 I actually spent a significant part of my weekend reinstalling Windows on two partitions – one for work and one for play.

Josh: Nice, glad you enjoyed the video. The British missions get pretty crazy. There were a few times I was ambushed – never actually felt vulnerable in a game before. Super intense.

Trovster: That will most definitely change. I haven’t been able to play any of the MOH games, including Pacific Assault since playing COD. They just don’t compare.

OK! my opinions on MOH and COD. I played HEAPS of MOH:AA befor e COD came out. Then i got addicted to playing MOH:AA online, man its so much fun. I still play it everynow and then online. I love COD single player, but couldnt get used to COD multiplayer online. I want to get into it more though.

Josh: You’re a brave man! And I agree that the COD multiplayer has never felt all there. The first one wasn’t bad, but I hardly played it. I thought COD:UO would be great since they added vehicles, but I didn’t like it at all. Still love BF1942 for WWII multiplayer – and Day of Defeat: Source is also up there.

The game is cool, I had to buy a new cpu, a new graphics card, new sound card and 1extra gb of ram. It was worth the money, the American Campaign was more then my old computer could handle and becasue I was hooked already, I had to upgrade everything.

With all my fingers crosse this will be one of the games that I pick up with my 360 on Dec 2nd.

It’s been a toss up between this and Perfect Dark since the beginning – and I still haven’t seen any compelling reasons for PD:0

Maybe online play, but I dunno

You do realise this is a PC review 😛

it could be wayyyy different on console.

Think it’s a safe bet on the 360. GameSpot’s review is really positive and gave it the same rating they did the PC version.

On the Xbox 360, this first-rate WWII first-person shooter is every bit as intense and hard-hitting as the PC version of the game.

Well i finally picked up a copy, and its great!! woohoooo

I lied the oringal CoD and this game reinforced the best parts of the oringinal, a great game to play! (esp if u like CoD or other WW2 FPS games)

I am finally upgrading my rig next week and hae waited too long for a capable pc just to play this game. Great review!

[…] well, it’s bringing a level of intensity to battles like no other. I remember playing through Call of Duty 2 for the first time and quite literally working up a sweat. Obviously, I’ve never been in the […]