Battlestar Galactica is the Best TV Series Ever

First of all, if you’re snickering to yourself and about to leave an inflammatory comment, go and rent the first disc of season 1 (which is actually the miniseries) then come back and talk to me. Now that we’ve got that out of the way, how fucking incredible was this week’s episode (3×04, Exodus Part 2)? I’ve watched up until the end of Season 2 with my wife at least 3 times in its entirety and we thought we had seen “the best episode” a few times already. Well, I do believe Exodus Part 2 takes that crown, at least for now. For those that haven’t seen it or aren’t up to speed in Season 3, there are serious spoilers ahead. You’ve been warned. 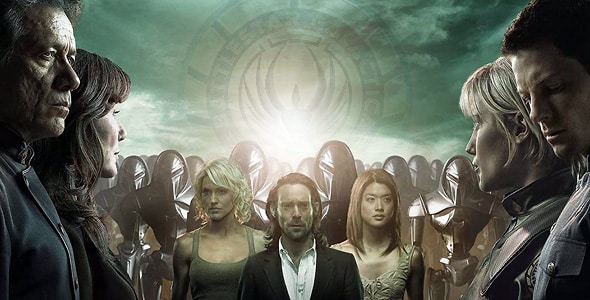 When season 2 ended, I was upset, angry, disappointed, frustrated… I couldn’t believe they would leave off with the human race being beat down so badly when it finally seemed like they were going to find a way out. I thought for sure they would back-pedal and find a way to ensure Baltar doesn’t become president. But season 3 picked up right where they left off. With 40,000-odd under Cylon control on New Caprica and a couple thousand scattered across the fleet who had jumped away. Just when it looked like all of season 3 would take place on the concentration camp that is New Caprica, a plan was set in motion to evac the barren planet and rescue the entire population.

I really had no idea what was going to go down, but I knew it was going to be a great episode. There were so many incredible moments I don’t even know where to start. But when I saw Galactica jump into the atmosphere, barreling toward the ground while deploying Vipers, I nearly shat myself. I think that could have been the single greatest moment in the show’s history. And then to see the damage they took because of it and the pounding they received from the Base Ships, man… it was just beyond anything I could have imagined.

I absolutely love the emotional, tear-jerker endings as well. They’re few and far between, but they always seem so well deserved. Like when Lee returned his grandfather’s lighter and Starbuck just grabbed the President and hugged her after the Tillium Refinery assault mission. Or the unveiling of the Blackbird stealth ship. I just wish they hadn’t focused so much on Tigh. I hate that man and really enjoyed seeing him suffer. Having to kill his own wife was something that seemed so appropriate, for both of them.

I’ve never been into any TV/film series as I am with BSG. I’m super glad that my faith has been restored so quickly (I was actually hooked again after episode 3×01 aired) and BSG is back to it’s old greatness… not that it ever departed from it for long. There were a couple obvious “filler” episodes in season 2, but aside from them…

Now that I’ve laid my inner-geek on the table for you all to poke and prod, anyone else want to share their love for BSG? I know I’m not alone. 🙂

Yea tonights episode was incredible. I think that show has great writing but also great chemestry between the actors. Odama and Lee’s moments are "Field of Dreams" style good.

Can’t get enough – I just hope they never "Jump the Shark" (read wikipedia for that) with this show.

The episode was AWESOME! Unfortunately my wife isn’t into the series so I was trying to tell her how cool it was but getting no where. I called my brother in the middle of dinner just to see if he’d seen it . No Dice. It’s great to hear someone else thought the Galactica Jumping in was KICK ASS!

Thanks for making me feel less alone 😉

How can you not like Tie? So far this season he’s been one of the strongest Characters!

I’m avoiding reading this post because I haven’t seen any of the third season yet, but I agree that it’s the best TV show I’ve seen in a very long time, and I’m addicted to it.

By the way, in the spirit of Halloween and BSG, have you seen the Cylon Jack-O-Lantern yet?

Absolutely spot on – I don’t think there’s been a single episode that hasn’t had me gripped from start to finish, and Exodus pt 2 was incredible; you’re right, when Galactica jumped straight into the atmosphere…ooh, it made me go all shivery.

But what I like even more is that it’s such a human drama as well. Yes, the battles and effects are very well done, but the look on Starbuck’s face when Casey was taken away from her…and Ti killing his wife, and then walking away from the post-battle celebrations…it’s all just brilliant.

It is most definitely the best show (Lost isn’t far behind in my books, but BSG still takes the cake by a large margin, SG doesn’t even fall in remotely the same category any more. BSG is pure SCI-FI). I like the episode so much I’m currently wathcing the original 30 year old episodes while I’m waiting for the new ones 🙂

I honestly didn’t belive they would make the escape from New Caprica in just one episode. Even better, ’cause now they can continue where they left of in season 2.

Btw, Matt where did you get those snazy looking Colonial Raptor and Viper models? I want one ^^

I did not read your entire post because I still have to watch that last episode. Hope that I will remember coming back here to read the rest of your writing 🙂

BSG is currently one of my favorite TV-Shows!

Ahh! So far they’ve only showed season 1 over here, so I might have to go off and buy the dvds. I have loved everything so far, every episode justs gets better IMO.

BSG is one of my favourite shows, and I just think how everybody online was shitting themselves about news of this "remake" and how it wouldn’t live up to the old series

well I think they’re all choking on their typed words now, and are probably avid watchers.

that bit with the BS jumping into the atmosphere and releasing the vipers, was insane, as well as the following battle sequence and death of the pegasus, stands as one of the most original and gripping sci-fi moments that I have ever seen

Plus, Tie rules! His character has had more development in these 4 new eps then in the past two series. Im really looking forward to whats happening with him in the upcoming eps!!

also Baltar!? what happened to him? did he go with the Cylons or the colonists?

I just started tuning in to BSG and I’m hooked!

@Dan: You sir, are half the reason I wrote this post. As much as I wanted to tell everyone how much I love this series, I was hoping to attract others who share this love so we can all geek out. 😛

@Miha: I picked them up at a comic/toy shop in Toronto. You can get them all over the place online. I really want a Viper Mark II, but they’re sold out and going for ridiculous prices on eBay.

@Kyle: Thanks for the correction. I forgot the first episode was actually 1 and 2.

@roraz: Baltar was left with "Caprica" Six – so I’m assuming he left with the Cylons. Clearly, he couldn’t return to Galactica.

As for Tigh (correct spelling, I looked it up and corrected mine), I can’t get over the mess he made when Adama was out of commission. And all of the Ellen-influenced mistakes… simply unforgivable. Bill is far too lenient. 😛

I just love this bit

One word: Awesome! That last episode was great! Loved it and that just proved why I am a fan of this series.

I agree with you Matt, BSG is awesome! Although I must say that Firefly still is closest to my heart. Damn, I miss that serie…

I must say I cannot recall ever being so gripped and blown away by a visual medium, either small or big screen, than I was by that BSG S3 episode four! It is certainly the best show ever.

As you know, I have yet to see a single episode. But my brother-in-law told me about the scene with the Galactica entering Earth’s orbit – so I watched it on YouTube to see what all the fuss was about. I didn’t think it as special as I thought it would be – perhaps it was over hyped with all the comments like "Best show ever" and "best scene in TV history, etc".

I think I will have to watch BSG from the beginning to get accostumed to all involved, so that I can now how truly bad ass that move was.

Now, I agree with you that its a great show. But, for me, I don’t think anything can surpass Buffy the Vampire Slayer as best TV show ever.

Come on! SMG, vampires, , werewolves, demons, ghosts, lesbian witches..does it really get better than that?

I was really starting to question the show with the first couple of episodes of S03. First we get Tigh going all al-Queda on us, then there was the B.S. revisionism when we returned to the Rescue of Cally at the Cylon firing line (when the episode prior ended, we saw her running and she flinched when the gunfire began, but was definitely still on her feet… When the show picked up just before it ostensibly left off, we have the Chief rescuing her so that the gunfire can *start*, and then there’s the bulletheads’ unnaturally long pause before firing, to give the Chief time for his heroics — and the civilian targets time to panic and scatter, while the bulletheads stood there with their guns fixed doing nothing… c’mon.)

But S03E04 restored my faith. Two of the best quotes so far, this season or any: "All hands, brace for turbulence." "Well, this should be different."

Colin, you definitely have to start watching the show. Grab seasons 1&2 somewhere and download the 4 episodes of season 3.

For heaven’s sake! It’s absolutely jaw-to-floor one. I must say – one of the best currently aired! Can’t wait for season 4…