When it’s working, Battlefield 4 is an absolute blast! Sadly, EA/DICE have let us down yet again, with what could quite possibly be the rockiest Battlefield launch to date. It’s hard to believe, but I wrote about EA ruining the Battlefield franchise back in 2006, and it seems that not a whole lot has changed. Battlefield 4 shipped with a huge list of glaring bugs, frequent crashes, and even single player save game corruption issue. Thankfully now, six weeks post launch, things are a heck of a lot more stable than they were, but there’s still quite a ways to go. The most tragic part of this whole ordeal, is that Battlefield 4 is a really, really great game! Its competitive multiplayer is the best it’s ever been, and the single player campaign, while far from perfect, still provides half a dozen hours of fun.

Typically, I write about the single player experience first, then spend a paragraph or two covering the multiplayer, if I’ve spent any time playing it. In Battlefield 4’s case, multiplayer is king, and the real reason anyone would want to get their hands on this game. Keep in mind, I played Battlefield 4 on PS4, so my experience may differ from last-gen consoles, as things like player count are different. 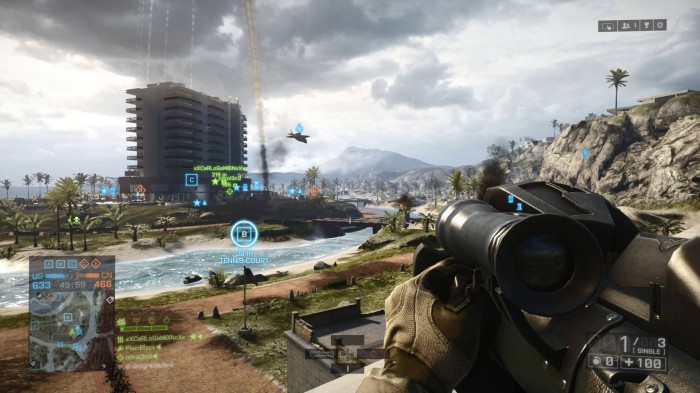 I was eager to jump into a 64 player game of conquest, but unfortunately the servers were shit within the first week of the PS4’s launch. In that time, I played through most of the campaign, as the game was constantly crashing whenever I tried to play online. Not the best start, but I feel like it made the online experience even better when things finally stabilized, as I was truly blown away by the scale of these matches. In the grand scheme, 32 vs 32 doesn’t sound like a big game. But when you have dozens of soldiers on the ground, a pile of tanks and APCs tearing through the landscape, jets and helicopters battling overhead, and gun boats making sure that even the surrounding water is deadly, it really does feel like you’re in the middle of a battle.

As you would expect, and as is fully necessary, the maps are huge. But given the amount of players, frustrating moments spent looking for players to shoot or squad up with are few and far between. For starters, you can spawn on your squad members instead of a capture point, which is great for quickly getting back into the action, or supporting a squad member who’s under fire. Even if they’re in a vehicle, as long as there’s an extra seat, you can hop in. There are bonus points given to those that have someone spawn on them, and additional points if you help a squad (or even team) member by supporting, avenging their death, reviving, supplying with ammo, etc.

One of my favourite things about Battlefield’s online play over other conventional shooters, is that there isn’t a huge emphasis on your kill/death ratio. And not just because I’m rarely in the top 10, but because there are so many other things you can do to earn points, that it’s not just about killing people. As I mentioned previously, acting as a team player will net you points, along with other simple tasks like spotting enemies, repairing vehicles (with the engineer kit), and so on. In objective based games, the biggest points are typically awarded for completing objectives. It’s quite easy to rack up a few thousand points in a round while maintaining a very low kill count by focusing on objectives.

Similar to previous games in the franchise, Battlefield 4 allows you to choose what type of soldier you’d like to be, and fully customize your loadout. Weapons, equipment, gadgets, abilities, and vehicle upgrades are unlocked as you progress, and I found that after every couple rounds I would have something new to play with. My only beef with this system, is that there isn’t a way to customize your kits outside of a game. If you’re constantly switching between kits and unlocking things across the board, it can take some time to go through it all, and determine what you want to roll with. Since you can only do this in game, you lose out on actual game time, and your team loses out on a fellow soldier while you’re customizing your kits. Hopefully this is addressed in a patch down the road, but I know DICE have their hands full fixing bugs at the moment. 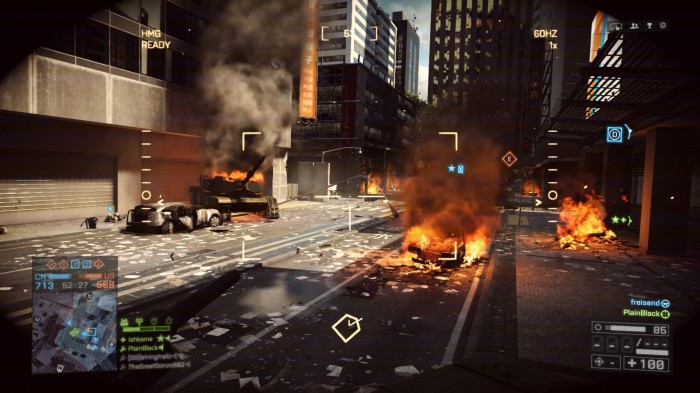 The level of destruction in Battlefield 4 is astounding. I’m sure you’ve seen the “levolution” trailer, where a skyscraper comes tumbling down, a battleship steams toward a small island, and a dam breaks, flooding the entire town. While those moments where a huge chunk of the map’s landscape is instantly changed are fantastic, it’s everything else that’s really impressive. When you’re on the ground and a tank rolls up on you; there’s really nowhere to hide. I learned early on, that if you don’t have an anti-tank RPG or some C4 on hand and a tank is approaching, turn tail and run… but not before you “spot” it.

Now, the single player campaign; it’s relatively short, the story is totally predictable and super cheesy at times, and it’s hard to take it seriously when you have points and awards popping up on screen the entire time. I do like that they have the multiplayer points system in the campaign, but it totally makes it feel more like a shooting gallery than anything else. One great thing about it, is that one of the main characters (a black dude named Irish, what?) is voiced by Michael K. Williams, AKA Chalky White from Boardwalk Empire. A huge improvement over Battlefield 3, is the music. It’s still on the heavy electronic side, but it’s not flat out aggravating, and there are some nice hints of the original Battlefield theme through-out. 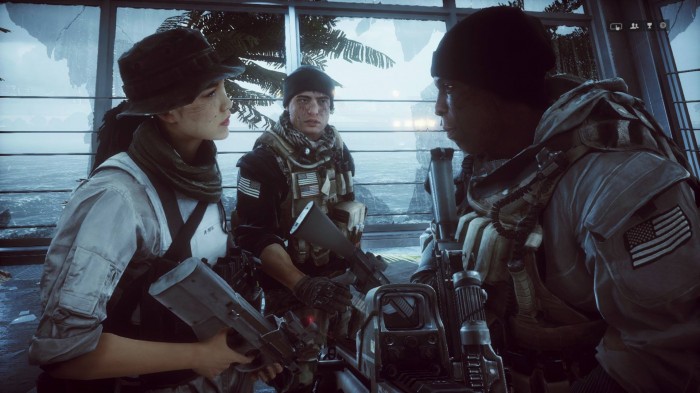 I really wish I could give Battlefield 4 a higher score, but even 4/5 seems quite liberal, given how bug ridden this game has been since launch. I’m more so rating the game I know it will be, than the game it was at launch. At this point in time, it’s quite stable on PS4, and most of the glaring bugs have been sorted out, but there are still quite a few kicking around, and I’m glad DICE is focusing their efforts on cleaning up the core game, rather than producing DLC.

Battlefield 4 is a game for people who love first person shooters. Its competitive multiplayer is easily some of the best around, and no matter your skill level, can be an enjoyable experience. If you’ve been on the fence about Battlefield 4 due to the technical issues, rest assured that things are quickly being sorted out, and even now (at least on PS4) it’s totally stable.