Oh Ubisoft, what have have you done? 10 hours into Assassin’s Creed III, I’m throwing in the towel. A slow start, a few bugs here and there, some dull missions, sub-par voice acting, lack of polish… one or two of these flaws can be overlooked. But when you throw them all into the mix, you have a game that’s constantly tripping over itself, and an experience that’s nothing short of frustrating, and often infuriating. It pains me to admit, that one of my most anticipated games of 2012, Assassin’s Creed III, is a failure of epic proportions.

To date, I’ve played every console game in the Assassin’s Creed franchise. While I was skeptical if Ubisoft could maintain the level of quality once they started churning them out year-after-year, they managed to surprise me every time, and each game continued to be better than the last. That is, until this year. Assassin’s Creed III was supposed to be this grand experience. We were supposed to be blown away by its majesty. We have been let down, for AC III is so full of bugs, and is so unrefined, that it’s impossible to place it upon the pedestal that Ubisoft built for it.

I’ve experienced a whole slew of bugs, ranging from collision detection issues, to scripted AI follies, to events mis-firing or not firing at all. In most cases, I found myself shaking my head in disappointment. But that disappointment turned quickly to rage when I was forced to restart from the last checkpoint, for the third or fourth time. Sure, the game auto-saves often and no real damage was done, but that’s beside the point. This triple A title is at best an average C.

While roaming the frontier on horseback, I always attempted to assassinate a large animal (deer or elk). I just thought it would be funny; air assassinate a deer after jumping off a horse. Anyway, I finally pulled it off, and nearly jumped up from the couch and threw my hands in the air, when I notice that Connor was, well, gone. In his place, a large tree. It seemed that I somehow managed to leap into the tree, and had gotten stuck there. I confirmed this, by equipping my trusty hatchet, which I could see protruding from the large trunk. Try as I surely did, there was no escaping the tree. This was the straw that broke the camel’s back. 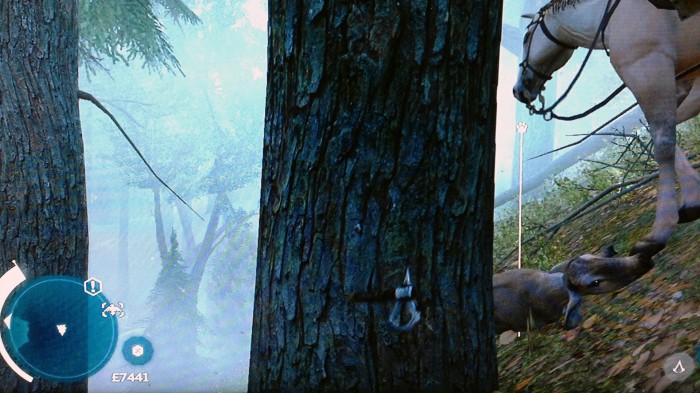 No, that’s not an axe wielding tree. Connor is in there, somewhere.

Perhaps it’s due to the fact that I’ve played all of the other games in the franchise, or that I was fully expecting to be playing as a native, since that’s all we’ve been shown in trailers and gameplay videos prior to release. In any case, I found the first 4-5 hours to be excruciating. I couldn’t have cared less about the British dude you play as initially, what he was up to, or who he was communicating with. I just wanted to play as the native assassin, Connor. It wasn’t until roughly 5 and a half hours of solid gameplay that I reached this point, and things did quickly turn around, but too little to late, it seems.

During my time as the British dude, I picked up some letters from a guy who wanted me to deliver them through-out Boston. I handed out a couple to people that were near my main objectives, but forgot about the rest. When I returned to Boston as Connor, some 20 years later, those folks were still there, waiting for their letters, and I… Connor, had them. That, flat-out, doesn’t make sense. Along the same lines, there are pages from a torn book that a rather well-known fellow asks the British dude to collect. Connor continues this mission later on. What Ubisoft should have done here, is held these missions until you are playing as Connor.

I recall in at least one of the previous Assassin’s Creed games, that the player was given the choice to run through basic gameplay tutorials or skip them entirely. Not only does AC III make you go through all of the rudimentary steps for the fifth time (AC III is the fifth full game in the franchise), it does so in a way that completely kills any momentum the game has picked up. There are no quick prompts or notes on screen. The action is halted, and instructions fill the middle of the viewing area. The player has to then perform the action before things resume, but there is a mandatory delay, so even if you perform the action quickly, you often still end up waiting for the game to resume.

The Devil’s in the Details

I’m sure my profession has a lot to do with this, but details matter. Big time! If the character is wearing a blue outfit and holding a sword, but then is shown wearing white and holding a hatchet in a cut-scene, that’s simply not acceptable. In previous games, you’ve been able to change the character’s appearance, and the cut-scenes also reflected the customizations, so I’m really unsure why the step backward in AC III.

One of the biggest annoyances I found, was starting and ending missions. There was one in particular, where a huge mob of hundreds had formed, and surrounded the area. As soon as the mission concluded and cut-scene ended, every single person was gone, as if nothing happened. I was actually really into it, and feeling a sense of liberation, then… nothing. Not even a high five from a passerby… because there was no one in sight.

I remember playing Oblivion years ago, and one of the things that really bugged me, was that there seemed to only be a few voice actors. So you would end up hearing the same voice coming out of multiple characters through-out the game. Surprisingly, AC III is horrible for this, as you hear the same voice and even the same recycled phrases over-and-over. To make matters worse, characters themselves are frequently reused. There was a mission where I had to go from house-to-house in different settlements and pass on a message. The same dude answered each door, and the exact same bit of dialogue was spit out. When this happens as frequently as it does in AC III, it makes it feel like you’re playing an unfinished game. Like they still have a bunch of placeholder content in place.

I tried to stick it out, and was actually starting to enjoy myself. But there have been too many glaring bugs and major issues for me to keep turning a blind eye. If this game came out during a drought in the new release cycle, then I would likely continue playing. But this is the time of year when games compete for our attention, and frankly, Assassin’s Creed III doesn’t deserve it. I’ll be trading in my copy, and picking up Halo 4. I only played the first two Assassins Creed games and only for a couple of hours. Never really dove into them. So I doubted if I should get AC3, because of all the awesome trailers and all the great (p)reviews it got. But after reading this, I think I will also choose Halo4 to be my next purchase.

Really looking forward to hear (read) what you think of Halo4 ^^

And I’m sorry AC3 didn’t lived up to your expectations.

I was looking forward to Halo 4, but I wasn’t planning to pick it up right away. Figured I’d be busy and content with AC III for a while. Since that’s no the case, I’m really stoked to pick up Halo 4 tomorrow now!

Bit of a bummer – never played AC1 for more than a few hours, but loved all the Ezio games. Going to give this a try though anyway 🙂
Is this game still developing the Desmond storyline? (no spoilers please!)

I know some people have been enjoying AC III, so by all means, give it a go! I just wasn’t able to look passed all of the imperfections and glaring issues.

To answer your question about Desmond – yes.

I think part of the problem was their ambition ,but also them trying to pander to everyone’s whim.

I played it for an hour before wanting to shoot myself in the face. Luckily I rented the game.

Oh man, so you didn’t even get to “the good part”? It’s about 5 hours in, when you finally start playing as Connor. Lucky you for renting it. I don’t have that luxury any more.

This is just a bad time for a highly-anticipated but poorly executed game to come out. Between Dishonored, Assassins Creed 3, Halo 4 and (now) Black Ops 2 all coming out within a month of each other, I need to be seriously entertained in order to not move on.

I beat Dishonored while waiting for Assassins Creed 3. However once AC3 came out, I found the same issue that I have had with most of the franchise – The repetition makes me feel like the game is stale. You hit the nail on the head with the reusable characters / voices, and it really does bring the overall feel of the game down. Add that to the awfully long intro sequence and I found myself feeling grateful that Halo 4 came out one week later.

Now if I decide to play both Halo 4 and Black Ops 2, then well, Assassins Creed 3 might as well just sit on my shelf forever because chances are it will be February before I even consider playing it again (and by then Bioshock Infinite will be in my grasp).

The point you made here, about the lack of time due to all of the other new releases, is exactly why I decided to trade it in. I knew with the other games on the horizon, I would end up shelving AC III in favour of the better games, and it would likely be months by the time I got back to it, if at all. I usually get at least a couple games for Christmas, and there are a few releases in the first few months of 2013 that I’m looking forward to as well. Actually really stoked on the Tomb Raider reboot, and as you mentioned, Bioshock Infinite.

Oh God yes the Tomb Raider reboot looks amazing. And that’s March, so chances are I’d not even touch AC3 until April/May by that point.

To be honest I don’t really know if i’ve enjoyed a sandbox-style mission game since Red Dead Redemption.